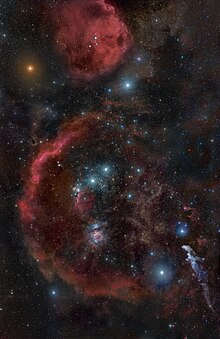 The mythological Greek hero Orion is the eponym of the constellation Orion, shown here, and thus indirectly of the Orion spacecraft.[1]

An eponym is a person, place, or thing after whom or which someone or something is, or is believed to be, named. The adjectives derived from eponym include eponymous and eponymic.

The word is used in different ways. In the most frequently cited meaning, an eponym[2][3] is a person, place, or thing after whom or after which something is named, or believed to be named. In this way, Elizabeth I of England is the eponym of the Elizabethan era. If Henry Ford is referred to as "the eponymous founder of the Ford Motor Company", either Henry Ford himself, or his name "Ford" could be called the eponym. Conversely, the name of the new thing can be called the eponym, and, especially in the recorded-music industry, eponymous is used to mean "named after its central character or creator".[4][5][6][7]

Periods have often been named after a ruler or other influential figure:

For examples, see the comparison table below.