Advertisement - You can get this game from STEAM
Multinational oil and gas company based in Italy
For other uses, see Eni (disambiguation).

Eni S.p.A. (Italian pronunciation: [ˈɛːni]) is an Italian multinational oil and gas company headquartered in Rome. Considered one of the seven "Supermajor" oil companies in the world,[2] it has operations in 66 countries[3] with a market capitalization of US$55.61 billion, as of 31 December 2019.[4] The Italian government owns a 30.303% golden share in the company, 3.934% held through the state treasury and 26.369% through the Cassa Depositi e Prestiti.[5] The company is a component of the Euro Stoxx 50 stock market index.[6]

The name "ENI" was initially the acronym of "Ente Nazionale Idrocarburi" (National Hydrocarbons Authority). Through the years after its foundation however, it operated in many fields including contracting, nuclear power, energy, mining, chemicals and plastics, refining/extraction and distribution machinery, hospitality industry and even textile industry and news. 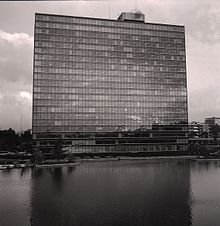 Eni was founded in 1953 from an existing company, Agip, which was created in 1926 with the aim to explore for oilfields, acquire and commercialize oil and derivatives.[10][11] In March 1953, Enrico Mattei was nominated Eni's chairman.[12][13]

Eni originally was an acronym for the company's full title Ente Nazionale Idrocarburi (National Hydrocarbons Authority).[14] After 1995, the meaning ceased to be relevant but the name was maintained.[15] In 1952, the logo of the then nascent Eni was selected. The logo is a six-legged dog, an imaginary animal symbolizing the sum of a car's four wheels and the two legs of its driver.[16][17]

Starting in 1954, Eni acquired extensive exploration rights in North Africa, signing an agreement with the Egyptian government led by Nasser while providing an active and equal role for the crude producing countries through the establishment of joint ventures.[14][18][19] In 1957, Eni pushed for a similar agreement, known as the "Mattei formula",[20][21] to be signed with Persian Shah Mohammad Reza Pahlavi and the National Iranian Oil Company.[22][23][24] In 1960, during the Cold War period, Eni signed an agreement with the Soviet Union for the importation of Russian crude at low prices.[25][26]

On 27 October 1962, Enrico Mattei's airplane mysteriously exploded near Bascapè, on his way to Milan from Catania.[27][28] His death was initially considered an accident, but later it was confirmed to be a murder with the aim to protect and hide important economical and political interests in Italy and especially abroad, as it is clearly stated in the records of the trial on the assassination of the journalist Mauro De Mauro, who was investigating on the death of Enrico Mattei.[29]

During the following years, Eni signed joint venture contracts with foreign companies to supply crude from Egypt to Iran and from Libya to Tunisia.[30] In 1963, Eni acquired a majority stake in Italgas.[31]

In October 1973, after the Yom Kippur War and the OPEC embargo[32][33] against the United States and the Netherlands by OPEC members and Arab countries, a serious his oil crisis occurred,[34] causing Eni to consolidate its position in the international market by signing an agreement with Sonatrach,[35] the Algerian state oil entity for natural gas supply.[36]

In 1974, Eni signed an agreement with the Libyan government, followed by additional agreements with Egypt, Nigeria and Tunisia.[37][38][39][40]

During the mid-1970s, Eni planned a major infrastructure for transporting natural gas over long distances, by building a pipeline network of thousands of miles throughout Europe and the Mediterranean.[41][42][43]

After the inauguration of the Trans-Mediterranean Pipeline connecting Algeria to Sicily through Tunisia,[44] Eni signs a new agreement with Libya for the exploitation of Boùri,[45] the biggest oilfield in the centre of the Mediterranean,[46] and develops its international role within the oil industry.[47]

As the price of oil collapsed in 1998 as other major companies Eni got to turn into a race through merges, international acquisitions, new explorations and the foundation of real super-companies.[59][60][61]

Since 2000, Eni has been developing the Kashagan[62] oilfield a major offshore discovery, along the Caspian Sea.[63][64]

In 2005, the Blue Stream pipeline projected to supply gas from southern Russia to Turkey was inaugurated as a joint venture between Eni and Gazprom.[65][66][67]

In 2007, Eni signed an agreement to conduct South Stream a feasibility study with Gazprom to import Russian gas into Europe across the Black Sea.[68][69][70]

Activist asset manager Knight Vinke, who owns 1% of the outstanding shares of the company, begun pressuring Eni's management to operate a spin-off of Eni's gas activities. In its opinion this would solve the undervaluation of the company and release up to 50 billion euros ($70bn) of hidden value.[71] 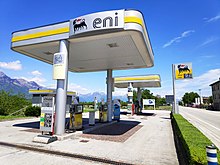 In February 2014, ENI discovered oil at its DRC offshore block.[94]

Since 2012, Eni has been selling off refining and marketing assets it owned in eastern Europe to increase profitability. By 2013 Eni already reduced its refining capacity by 13 percent. In May 2014 Eni agreed to sell their 32.5% share in Česká rafinerská a.s. (CRC), a refining company in Czech Republic, to MOL Group of Hungary.[95]

In 2014, Eni launched a new plan to convert its conventional refineries into biorefineries: the first plant was in Porto Marghera[97], in 2019 the second one opened in Gela.[98]

In January 2015, Eni in collaboration with Vitol Energy signed a $7 billion contract with the government of Ghana. This agreement was reached to produce oil and gas at Cape Three Points in the Western Region of Ghana, in an attempt to enable Ghana to meet its power and energy needs.

In August 2015, Eni announced the discovery of a huge gasfield off the coast of Egypt.[99]

In 2016, Eni launched Progetto Italia[100], which aims to redeveloping its industrial areas and to create new renewable sources production plants: in 2018 the first photovoltaic plant was inaugurated in Assemini[101], the second opened in Porto Torres[102], both in Sardinia.

In July 2017, the oil giant accepted responsibility for an oil spill affecting the Fylde coast of Blackpool in the United Kingdom.[103]

In January 2018, Eni launched its new HPC4 supercomputer, one of the most powerful computing systems which allows a more effective and fast exploration of oil and gas reservoirs.[104]Since February 2020 Eni replaced the HPC4 supercomputer with the new model HPC5, which has three times the computing ability compared to the previous one.[105]

In March 2018, Eni reached an agreement with MIT to fund fusion research projects run out of the MIT Plasma Science and Fusion Center (PSFC)’s newly created Laboratory for Innovation in Fusion Technologies (LIFT). The expected investment in these research projects will amount to about $2 million over the following years.[106] 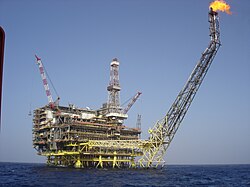 Eni Oil Bouri DP4 in Bouri Field is the biggest platform in the Mediterranean Sea.

In 2012, Eni reported liquids and gas production for the full year of 1,701 thousand barrel of oil equivalent per day (kboe/d), this being calculated assuming a natural gas conversion factor to barrel equivalent, updated to 5,492 cubic feet of gas equal 1 barrel of oil from 1 July 2012.[111][129]

Eni's electricity generation sites in Italy, as of July 2018, are the following:[147]

Eni is the leader operator in refining and marketing of petroleum products in Italy.[148][149] Eni is engaged in retail and wholesales activities in Central-Eastern European countries also (Austria, France, Germany, Italy, Czech Republic, Romania, Slovakia, Slovenia, Switzerland, Hungary).[150][151][152][153] Eni's market share in refining and marketing in 2019 was 23.7% in Italy, 12.3% in Austria, 7.7% in Switzerland, 3.2% in Germany and 0.6% in France. Eni also owned a 20% share of Ruwais refinery in Abu Dhabi.[154] Retail sales operations are conducted under the Eni and Agip brands. The re-branding of Eni's service stations in Italy and in the rest of Europe to Eni brand is underway.[148][155][156]

Eni operates in engineering, construction and drilling both offshore and onshore for the oil&gas industry through the subsidiary Saipem.[157]

In 2009, the European Commission filed formal antitrust charges against Eni. The commission believes that Eni has conspired to keep competitors from using its gas pipelines.[165]

In 2009 again, according to the WikiLeaks cables, US ambassador Lanier told Washington that bribery allegations were made in Uganda by Eni which at the time was in competition for oil assets in the country against Tullow Oil. The bribes were taken by the newly appointed Ugandan prime minister, Amama Mbabazi.[166]

After corruption charges against the subsidiary Saipem, Eni's CFO Alessandro Bernini had to resign and the new CFO Massimo Mondazzi took over in December 2012.[167]

Eni and Royal Dutch Shell will stand trial in Italy over allegations of corruption in the 2011 purchase of a big offshore oil field in Nigeria known as OPL 245. Eni and Shell reportedly paid $1.3 billion in bribes.[168]

Jordan Engel has listed the company among the top-100 companies killing the planet; these are the companies responsible for the 100 biggest contributions to global warming, responsible for more than 70% of the world's greenhouse gas emissions since 1988.[169]

In 2012, Eni is also included in the Carbon Performance Leadership Index[177][178] and is the only FTSE MIB company to gain the triple E for Standard Ethics.[179]

In 2013, Eni has been confirmed in the Dow Jones Sustainability Indices and, in the half-yearly review in March 2014, also in the FTSE4 good sustainability index.[182][183]

In 2013, Eni continued its commitment to integrated reporting, preparing the Annual Report 2013 in accordance with the principles and contents of the integrated reporting (IR) framework issued by the International Integrated Reporting Council (IIRC).[184][185]

Among the UN Sustainable Development Solution Network (SDSN), in 2013 Eni led the Energy For All in Sub-Saharan Africa initiative through international collaborations aimed at devising solutions to fight against energy poverty, in particular in Sub-Saharan Africa.[186][187]

In 2013, Eni's commitment continued in ensuring access of local communities to energy, particularly in Sub-Saharan Africa.[188]

In the first half of 2014 Eni achieved the start-up of the Porto Torres green chemistry plant and the Venice biorefinery.[189][190]

Eni has been ranked as the 11th best of 92 oil, gas, and mining companies on indigenous rights in the Arctic.[191]