Energy security is the association between national security and the availability of natural resources for energy consumption. Access to (relatively) cheap energy has become essential to the functioning of modern economies. However, the uneven distribution of energy supplies among countries has led to significant vulnerabilities. International energy relations have contributed to the globalization of the world leading to energy security and energy vulnerability at the same time.[1]

Renewable resources and significant opportunities for energy efficiency and transitions exist over wide geographical areas, in contrast to other energy sources, which are concentrated in a limited number of countries. Rapid deployment of renewable energy and energy efficiency, and technological diversification of energy sources, would result in significant energy security and economic benefits.[3]

The modern world relies on a vast energy supply to fuel everything from transportation to communication, to security and health delivery systems. Perhaps most alarmingly, peak oil expert Michael Ruppert has claimed that for every calorie of food produced in the industrial world, ten calories of oil and gas energy are invested in the forms of fertilizer, pesticide, packaging, transportation, and running farm equipment.[4] Energy plays an important role in the national security of any given country as a fuel to power the economic engine.[5] Some sectors rely on energy more heavily than others; for example, the Department of Defense relies on petroleum for approximately 77% of its energy needs.[6] Threats to energy security include the political instability of several energy producing countries, the manipulation of energy supplies, the competition over energy sources, attacks on supply infrastructure, as well as accidents, natural disasters, terrorism, and reliance on foreign countries for oil.[7]

Foreign oil supplies are vulnerable to unnatural disruptions from in-state conflict, exporters' interests, and non-state actors targeting the supply and transportation of oil resources. The political and economic instability caused by war or other factors such as strike action can also prevent the proper functioning of the energy industry in a supplier country. For example, the nationalization of oil in Venezuela has triggered strikes and protests in which Venezuela's oil production rates have yet to recover.[8] Exporters may have political or economic incentive to limit their foreign sales or cause disruptions in the supply chain. Since Venezuela's nationalization of oil, anti-American Hugo Chávez threatened to cut off supplies to the United States more than once.[9] The 1973 oil embargo against the United States is a historical example in which oil supplies were cut off to the United States due to U.S. support of Israel during the Yom Kippur War. This has been done to apply pressure during economic negotiations—such as during the 2007 Russia–Belarus energy dispute. Terrorist attacks targeting oil facilities, pipelines, tankers, refineries, and oil fields are so common they are referred to as "industry risks".[10] Infrastructure for producing the resource is extremely vulnerable to sabotage.[8] One of the worst risks to oil transportation is the exposure of the five ocean chokepoints, like the Iranian-controlled Strait of Hormuz. Anthony Cordesman, a scholar at the Center for Strategic and International Studies in Washington, D.C., warns, "It may take only one asymmetric or conventional attack on a Ghawar Saudi oil field or tankers in the Strait of Hormuz to throw the market into a spiral."[11]

New threats to energy security have emerged in the form of the increased world competition for energy resources due to the increased pace of industrialization in countries such as India and China, as well as due to the increasing consequences of climate change.[12] Although still a minority concern, the possibility of price rises resulting from the peaking of world oil production is also starting to attract the attention of at least the French government.[13] Increased competition over energy resources may also lead to the formation of security compacts to enable an equitable distribution of oil and gas between major powers. However, this may happen at the expense of less developed economies. The Group of Five, precursors to the G8, first met in 1975 to coordinate economic and energy policies in the wake of the 1973 Arab oil embargo, a rise in inflation and a global economic slowdown.[14] NATO leaders meeting in Bucharest Romania, in April 2008, may discuss the possibility of using the military alliance "as an instrument of energy security". One of the possibilities include placing troops in the Caucasus region to police oil and gas pipelines.[15][needs update]

Long-term measures to increase energy security center on reducing dependence on any one source of imported energy, increasing the number of suppliers, exploiting native fossil fuel or renewable energy resources, and reducing overall demand through energy conservation measures. It can also involve entering into international agreements to underpin international energy trading relationships, such as the Energy Charter Treaty in Europe. All the concern coming from security threats on oil sources long term security measures will help reduce the future cost of importing and exporting fuel into and out of countries without having to worry about harm coming to the goods being transported.[citation needed]

The impact of the 1973 oil crisis and the emergence of the OPEC cartel was a particular milestone that prompted some countries to increase their energy security. Japan, almost totally dependent on imported oil, steadily introduced the use of natural gas, nuclear power, high-speed mass transit systems, and implemented energy conservation measures.[16] The United Kingdom began exploiting North Sea oil and gas reserves, and became a net exporter of energy into the 2000s.[citation needed]

In other countries energy security has historically been a lower priority. The United States, for example, has continued to increase its dependency on imported oil[16] although, following the oil price increases since 2003, the development of biofuels has been suggested as a means of addressing this.[17]

Increasing energy security is also one of the reasons behind a block on the development of natural gas imports in Sweden. Greater investment in native renewable energy technologies and energy conservation is envisaged instead. India is carrying out a major hunt for domestic oil to decrease its dependency on OPEC, while Iceland is well advanced in its plans to become energy independent by 2050 through deploying 100% renewable energy.[citation needed]

A map of world oil reserves according to OPEC, 2013

Petroleum, otherwise known as "crude oil", has become the resource most used by countries all around the world including Russia, China (actually, China is mostly dependent on coal (70.5% in 2010)) and the United States of America. With all the oil wells located around the world energy security has become a main issue to ensure the safety of the petroleum that is being harvested. In the middle east oil fields become main targets for sabotage because of how heavily countries rely on oil. Many countries hold strategic petroleum reserves as a buffer against the economic and political impacts of an energy crisis. All 28 members of the International Energy Agency hold a minimum of 90 days of their oil imports, for example.[18][19]

The value of such reserves was demonstrated by the relative lack of disruption caused by the 2007 Russia-Belarus energy dispute, when Russia indirectly cut exports to several countries in the European Union.[citation needed]

Due to the theories in peak oil and need to curb demand, the United States military and Department of Defense had made significant cuts, and have been making a number of attempts to come up with more efficient ways to use oil.[20]

Countries by natural gas proven reserves, based on data from The World Factbook, 2014

Compared to petroleum, reliance on imported natural gas creates significant short-term vulnerabilities. The gas conflicts between Ukraine and Russia of 2006 and 2009 serve as vivid examples of this.[21] Many European countries saw an immediate drop in supply when Russian gas supplies were halted during the Russia-Ukraine gas dispute in 2006.[citation needed]

Natural gas has been a viable source of energy in the world. Consisting of mostly methane, natural gas is produced using two methods: biogenic and thermogenic. Biogenic gas comes from methanogenic organisms located in marshes and landfills, whereas thermogenic gas comes from the anaerobic decay of organic matter deep under the Earth's surface. Russia is the current leading country in production of natural gas.[citation needed]

One of the biggest problems currently facing natural gas providers is the ability to store and transport it. With its low density, it is difficult to build enough pipelines in North America[clarification needed] to transport sufficient natural gas to match demand. These pipelines are reaching near capacity and even at full capacity do not produce the amount of gas needed.[citation needed] 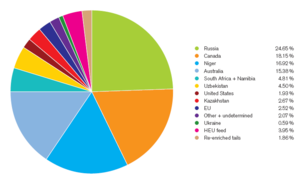 Sources of uranium delivered to EU utilities in 2007, from the 2007 Annual report of the Euratom Supply Agency

Uranium for nuclear power is mined and enriched in diverse and "stable" countries. These include Canada (23% of the world's total in 2007), Australia (21%), Kazakhstan (16%) and more than 10 other countries. Uranium is mined and fuel is manufactured significantly in advance of need. Nuclear fuel is considered by some to be a relatively reliable power source, being more common in the Earth's crust than tin, mercury or silver, though a debate over the timing of peak uranium does exist.[22]

Nuclear power reduces carbon emissions.[23] Although a very viable resource, nuclear power can be a controversial solution because of the risks associated with it.[24] Another factor in the debate with nuclear power is that many people or companies simply do not want any nuclear energy plant or radioactive waste near them.

Currently, nuclear power provides 13% of the world's total electricity.[25] The most notable use of nuclear power within the United States is in U.S. Navy aircraft carriers and submarines, which have been exclusively nuclear-powered for several decades. These classes of ship provide the core of the Navy's power, and as such are the single most noteworthy application of nuclear power in that country.

The deployment of renewable technologies usually increases the diversity of electricity sources and, through local generation, contributes to the flexibility of the system and its resistance to central shocks. For those countries where growing dependence on imported gas is a significant energy security issue, renewable technologies can provide alternative sources of electric power as well as displacing electricity demand through direct heat production. Renewable biofuels for transport represent a key source of diversification from petroleum products.[26]

As the resources that have been so crucial to survival in the world to this day start declining in numbers, countries will begin to realize that the need for renewable fuel sources will be as vital as ever. With the production of new types of energy, including solar, geothermal, hydro-electric, biofuel, and wind power. With the amount of solar energy that hits the world in one hour there is enough energy to power the world for one year. With the addition of solar panels all around the world a little less pressure is taken off the need to produce more oil.

Geothermal can potentially lead to other sources of fuel, if companies would take the heat from the inner core of the earth to heat up water sources we could essentially use the steam creating from the heated water to power machines, this option is one of the cleanest and efficient options. Hydro-electric which has been incorporated into many of the dams around the world, produces a lot of energy, and is very easy to produce the energy as the dams control the water that is allowed through seams which power turbines located inside of the dam. Biofuels have been researched using many different sources including ethanol and algae, these options are substantially cleaner than the consumption of petroleum. "Most life cycle analysis results for perennial and ligno-cellulosic crops conclude that biofuels can supplement anthropogenic energy demands and mitigate green house gas emissions to the atmosphere".[27][citation needed] Using oil to fuel transportation is a major source of green house gases, any one of these developments could replace the energy we derive from oil. Traditional fossil fuel exporters (e.g. Russia) struggle to diversify away from oil and develop renewable energy.[28]