Energy markets are commodity markets that deal specifically with the trade and supply of energy. Energy market may refer to an electricity market, but can also refer to other sources of energy. Typically energy development is the result of a government creating an energy policy that encourages the development of an energy industry in a competitive manner.

Until the 1970s when energy markets underwent dramatic changes, they were characterised by monopoly-based organisational structures.[1] Most of the world's petroleum reserves were controlled by the Seven Sisters. Circumstances changed considerably in 1973 as the influence of OPEC grew and the repercussions of the 1973 oil crisis affected global energy markets.

Regulators seek to discourage volatility of prices, reform markets if needed, and search for evidence of anti-competitive behavior such as the formation of a monopoly.

Current and past energy usage in the United States 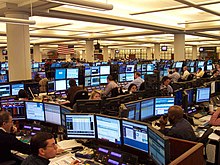 In recent years[when?], there has been a movement towards renewable and sustainable energy in the United States. This has been caused by many factors, including the threat of climate change, cost, government funding, tax incentives, and potential profits in the energy market of the United States. According to the most recent[when?] projections by the EIA out to the year 2040, the renewable energy industry will be growing from providing 13% of the power in the year 2011 to 16% in 2040. This is equivalent to 32% of the overall growth during this time period. This large increase has the potential to be very lucrative for companies wishing to tap into the renewable energy market in the United States.

This movement towards renewable energy has also been affected by the stability of the global market. Recent[when?] economic instability in countries in the Middle East and elsewhere has driven American companies to further develop American dependence on foreign sources of energy, such as oil. The long term projections by the United States Energy Information Administration for renewable energy capacity in the United States is also sensitive to factors such as the cost of domestic oil and natural gas production, prices, and availability.

Currently, the majority of the United States’ renewable energy production comes from hydroelectric power, solar power, and wind power. According to the U.S. Department of Energy, the cost of wind power doubled between the years of 2002 to 2008. However, since then, the prices of wind power have declined by 1/3, on average. Various factors have been contributing to the decline in the cost of wind power, such as government subsidies, tax breaks, technological advancement, and the cost of oil and natural gas.[5]

Hydroelectric power has been the most predominant source of renewable energy for quite some time due to the fact that it has been proven to be reliable and has been in use for quite some time. This source of energy has provided the majority of renewable energy and has been a significant source of overall energy production in the United States. The problem with traditional hydroelectric power has been the requirement of damming rivers and other sources of water. The problem created by damming is that the natural environment of the area is disrupted due to the formation of a lake caused by the damming of the water source. This creates uproar by environmentalists and a large obstacle to clear before being able to build a hydroelectric plant. However, new forms of hydroelectric power that harness wave energy from the oceans have been in development in recent years. Although these power sources still need much development before they become economically viable, they do have potential to become significant sources of energy.[6]

In recent years[when?], wind energy and solar energy have made the largest steps towards significant energy production in the United States. These sources have little impact on the environment and have the highest potential of renewable energy sources used today. Advances in technology, government tax rebates, subsidies, grants, and economic need have all lead to huge steps towards the usage of sustainable wind and solar energy today.

Energy market in the U.S.