Advertisement - You can get this game from STEAM
One of the principal agencies of the U.S. Federal Statistical System and part of the U.S. Department of Energy

The U.S. Energy Information Administration (EIA) is a principal agency of the U.S. Federal Statistical System responsible for collecting, analyzing, and disseminating energy information to promote sound policymaking, efficient markets, and public understanding of energy and its interaction with the economy and the environment. EIA programs cover data on coal, petroleum, natural gas, electric, renewable and nuclear energy. EIA is part of the U.S. Department of Energy.

The Department of Energy Organization Act of 1977 established EIA as the primary federal government authority on energy statistics and analysis, building upon systems and organizations first established in 1974 following the oil market disruption of 1973.

EIA disseminates its data products, analyses, reports, and services to customers and stakeholders primarily through its website and the customer contact center.

By law, EIA's products are prepared independently of policy considerations. EIA neither formulates nor advocates any policy conclusions. The Department of Energy Organization Act allows EIA's processes and products to be independent from review by Executive Branch officials; specifically, Section 205(d) says: 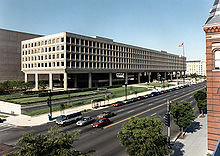 More than 2 million people use the EIA's information online each month. Some of the EIA's products include:

The Federal Energy Administration Act of 1974 created the Federal Energy Administration (FEA), the first U.S. agency with the primary focus on energy and mandated it to collect, assemble, evaluate, and analyze energy information. It also provided the FEA with data collection enforcement authority for gathering data from energy producing and major consuming firms. Section 52 of the FEA Act mandated establishment of the National Energy Information System to “… contain such energy information as is necessary to carry out the Administration’s statistical and forecasting activities …”

The Department of Energy Organization Act of 1977, Public Law 95-91, created the Department of Energy. Section 205 of this law established the Energy Information Administration (EIA) as the primary federal government authority on energy statistics and analysis to carry out a " ...central, comprehensive, and unified energy data and information program which will collect, evaluate, assemble, analyze, and disseminate data and information which is relevant to energy resource reserves, energy production, demand, and technology, and related economic and statistical information, or which is relevant to the adequacy of energy resources to meet demands in the near and longer term future for the Nation’s economic and social needs."[4]

The same law established that EIA's processes and products are independent from review by Executive Branch officials.

The majority of EIA energy data surveys are based on the general mandates set forth above. However, there are some surveys specifically mandated by law, including: