The Embraer E-Jet family is a series of narrow-body short- to medium-range twin-engine jet airliners, carrying 66 to 124 passengers commercially, manufactured by Brazilian aerospace manufacturer Embraer. The aircraft family was first introduced at the Paris Air Show in 1999 and entered production in 2002. The series has been a commercial success primarily due to its ability to efficiently serve lower-demand routes while offering many of the same amenities and features of larger jets. The aircraft is used by mainline and regional airlines around the world but has proven particularly popular with regional airlines in the United States. 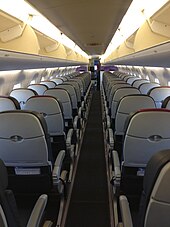 Embraer first disclosed that it was studying a new 70-seat aircraft, which it called the EMB 170, in 1997, concurrently with announcing the development of its ERJ 135.[7] The EMB 170 was to feature a new wing and larger-diameter fuselage mated to the nose and cockpit of the ERJ 145.[8] The proposed derivative would have cost $450 million to develop.[9] While Alenia, Aerospatiale and British Aerospace through AI(R) were studying the Airjet 70 based on the ATR 42/72 fuselage for a 2,200 km (1,200 nmi) range, AI(R) and Embraer were studying a joint development of a 70-seater jet since their separate projects were not yet launched.[10]

In February 1999, Embraer announced it had abandoned the derivative approach in favour of an all-new design.[11] The E-jet family was formally launched at the Paris Air Show on 14 June 1999[12] as the ERJ-170 and ERJ-190, designations later changed to Embraer 170 and Embraer 190. Launch customers for the aircraft were the French airline Régional Compagnie Aérienne Européenne with ten orders and five options for the E170; and the Swiss airline Crossair with an order for 30 E170s and 30 E190s.[2]

Production of parts to build the prototype and test airframes began in July 2000.[11] The first prototype (PP-XJE)[13] rolled out on October 29, 2001 [12] at São José dos Campos, Brazil. Its first flight occurred 119 days later on February 19, 2002, marking the beginning of a multi-year flight test campaign. The aircraft was displayed to the public in May 2002 at the Regional Airline Association convention. Full production began in 2002, at a new factory built by Embraer at its São José dos Campos base.[14]

After several delays in the certification process, the E170 received type certification from the aviation authorities of Brazil, Europe and the United States in February 2004.[16][18]

The first E170s were delivered in the second week of March 2004 to LOT Polish Airlines, followed by Alitalia and US Airways-subsidiary MidAtlantic Airways[18][19] LOT operated the first commercial flight of an E-jet on 17 March 2004, from Warsaw to Vienna.[20] Launch customer Crossair had in the meantime ceased to exist after its takeover of Swissair; and fellow launch customer Régional Compagnie Aérienne deferred its order,[11] not receiving its first E-jet—an E190LR—until 2006.[21])

The first E175 was delivered to Air Canada and entered service in July 2005.

On 6 November 2008, the longest flight of an E190 was flown by JetBlue from Anchorage Airport to Buffalo International Airport over 2,694 nmi (4,989 km), a re-positioning flight after a two-month charter for Vice Presidential candidate Sarah Palin.[28][importance?]

On 14 October 2017, an Airlink Embraer 190-100IGW with 78 passengers aboard inaugurated the first scheduled commercial airline service in history to Saint Helena in the South Atlantic Ocean, arriving at Saint Helena Airport after a flight of about six hours from Johannesburg, South Africa, with a stop at Windhoek, Namibia. The flight began a once-a-week scheduled service by Airlink between Johannesburg and Saint Helena using Embraer 190 aircraft.[29] The inaugural flight was only the second commercial flight to Saint Helena in the island's history, and the first since a chartered Airlink Avro RJ85 landed at Saint Helena Airport on 3 May 2017.[30]

In November 2011, Embraer announced that it would develop revamped versions of the E-Jet to be called the E-Jet E2 family. The new jets would feature improved engines that would be more fuel efficient and take advantage of new technologies.[31] Beyond the new engines, the E2 family would also feature new wings, improved avionics, and other improvements to the aircraft. The move came amid a period of high global fuel costs and better positions Embraer as competitors introduced new and more fuel efficient jets, including the Mitsubishi Regional Jet.[32] The new aircraft family also includes a much larger variant, the E195-E2 capable of carrying between 120 and 146 passengers. This jet better positions Embraer against the competing Airbus A220 aircraft. The PW1000G was previously selected for use on competing aircraft.

The Embraer E-Jets line is composed of two main commercial families and a business jet variant. The smaller E170 and E175 make up the base model aircraft. The E190 and E195 are stretched versions, with different engines and larger wing, horizontal stabilizer and landing gear structures. The 170 and 175 share 95% commonality, as do the 190 and 195. The two families share near 89% commonality, with identical fuselage cross-sections and avionics, featuring the Honeywell Primus Epic Electronic flight instrument system (EFIS) suite.[17] The E-jets also have winglets to improve efficiency.

All E-Jets use four-abreast seating (2+2) and have a "double-bubble" design, which Embraer developed for its commercial passenger jets, that provides stand-up headroom. The E190/195 series of aircraft have capacities similar to the initial versions of the McDonnell Douglas DC-9 and Boeing 737. The E-Jets have turbofan engines designed to reduce noise, which allows them to operate in airports that have strict noise restrictions, such as London City Airport.[37] At 185 sq in (0.119 m2), the E-Jet windows are larger than the 175 sq in (0.113 m2) Boeing 787 windows.[38]

The E175 was first delivered to and entered service with Air Canada in July 2005.

The E175 is a slightly stretched version of the E170 and first entered revenue service in July 2005.[16] The E175 typically seats around 78 passengers in a typical single class configuration, 76 in a dual-class configuration, and up to 88 in a high-density configuration. Like the E170, It is powered with General Electric CF34-8E engines of 14,200 pounds (62.28 kN) of thrust each. It competes with the Bombardier CRJ900 in the market segment previously occupied by the earlier BAe 146 and Fokker 70.

In late 2017, Embraer announced the E175SC (special configuration), limited to 70 seats like the E170 to take advantage of the E175 performance improvements, but still comply with US airline scope clauses limiting operators to 70 seats. Embraer is marketing the E175SC as a replacement for the older 70-seat Bombardier CRJ700 with better efficiency and a larger first class.[40]

In 2018, a new E175 has a value of US$27 million, projected to fall to US$3–8 million 13 years later due to their concentration in the US with more than 450 in service out of 560, with Republic and SkyWest operating over 120 each, Compass 55 and Envoy Air 45, after the similar experience with the CRJ200 and ERJ 145 demonstrates the limited remarketing opportunities.[41]

The E190 launch customer jetBlue took its first delivery in 2005.

The E190/195 models are a larger stretch of the E170/175 models fitted with a new, larger wing, a larger horizontal stabilizer, two emergency overwing exits, and a new engine. The Embraer 190 is fitted with two underwing-mounted GE 34-8E-10 turbofan engines, rated at 82.29kN. The engines and engine nacelles are supplied by General Electric. The engines are equipped with full authority digital engine control (FADEC).

Air Canada operated 18 E190 aircraft fitted with 9 business-class and 88 economy-class seats as part of its primary fleet. They were retired in May 2020. JetBlue, American Airlines, and Georgian Airways operate the E190 as part of their own fleet. Austrian Airlines have 17 E195 aircraft in their mainline fleet.[48] 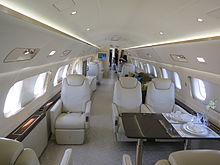 Embraer considered producing an aircraft which was known as the E195X, a stretched version of the E195. It would have seated approximately 130 passengers. The E195X was apparently a response to an American Airlines request for an aircraft to replace its McDonnell Douglas MD-80s.[50] Embraer abandoned plans for the 195X in May 2010, following concerns that its flight range would be too short.[51]

SkyWest Airlines is one of the largest E-jet operators.
Main article: List of Embraer E-Jet operators

The E-jet was involved in 21 incidents involving seven hull losses.[54] Of the seven hull-losses, six are accidents causing 44 fatalities and one is criminal causing 33 fatalities, while one hijacking caused 2 fatalities.[55]

Hull losses with no fatalities 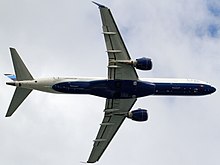