Germany and the United States first established diplomatic relations in 1871, the year of the establishment of the German Empire.[2]

Theodore Roosevelt and aide de camp Col. Bingham depart the chancery of the German embassy in the presidential state coach following a return visit to Prince Henry of Prussia in 1902.

During the years prior to American entry into World War I, Franz von Papen was posted at the embassy as a military attache, though was ultimately declared persona non grata by the U.S. government as a result of suspected espionage. In February 1917 the United States terminated diplomatic relations with Germany. Staff of the embassy were returned their passports by the U.S. government and departed for Germany shortly thereafter.[6][7][8]

Following the conclusion of World War I, in 1921, Germany reestablished diplomatic relations with the United States and the German embassy reoccupied its former chancery.[9]

The Massachusetts Avenue chancery of the German embassy pictured in the early 20th century.

In the spring of 1938 the German government approved plans for construction of a new chancery.[10] Construction, however, was ultimately sidetracked by the war in Europe.[11]

A serious diplomatic incident occurred in January 1941 when U.S. Navy sailors Edward Lackey and Harold Sturtevant, both on leave from the psychiatric ward of the Navy's Mare Island Hospital where they had been treated for sleep walking, scaled a fire escape, tore down the flag from the German consulate in San Francisco and destroyed it. According to the sailors, they were unaware the building at which the flag was being flown was the German consulate. In his memoirs, consul Fritz Wiedemann, who witnessed the incident, recalled it as "both surreal and comical". The United States government issued an apology to Germany. The two sailors were briefly jailed and dismissed from military service, though following the onset of war with Germany they were pardoned and allowed to reenlist.[12][13] 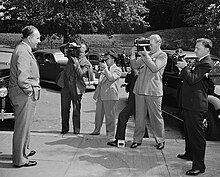 Ambassador Hans-Heinrich Dieckhoff is photographed by journalists leaving a meeting at the U.S. State Department in 1938.

On December 12, 1941 – following Germany's declaration of war against the United States – Switzerland assumed the role of protecting power of Germany in the United States and took custody of the chancery of the German embassy; staff were, meanwhile, interned at the Greenbrier until an exchange of diplomats was arranged the following year. During World War II, Switzerland used parts of the chancery to house its own staff, thereby alleviating a housing shortage for Swiss diplomatic personnel in the United States. Following the German military surrender in May 1945, Switzerland acknowledged the extinction of the German state and declared itself absolved of protecting responsibilities. The chancery of the embassy was surrendered by Switzerland to the United States government as trustee of the Allied Control Council that month.[14][15] Upon receiving custody of the building, the United States government removed all documents and files that had been left behind by the German delegation and held them until 1950, at which point they were given to the then newly established West German government.[14][16]

Jürgen Chrobog was German ambassador to the United States in the early 2000s.

The furnishings of the former German chancery were sold at auction by the U.S. government in 1948, fetching slightly less than $50,000.[17] The chancery was auctioned by the U.S. government in 1951. Morris Cafritz was the high bidder, however, the government subsequently rejected his bid as too low.[18][19] It was thereafter sold by the U.S. government to James S. Kerwin for $165,000. United States Senator William Langer opposed the sale, saying the site should be held in trust by the U.S. government for the future use of Germany.[20] Four years later, the property was razed and turned into a parking garage.[21] In 1955 the United States established diplomatic relations with West Germany. The United States awarded the Federal Republic of Germany $300,000 from the earlier sale of the chancery and its furnishings, and a new chancery was occupied in Foxhall that year. The facility was constructed in a modern style and featured modern interior decor as, according to German diplomats at the time, the country "has no antiques now".[22][2][23]

The German Democratic Republic (GDR) and the United States began full diplomatic relations in 1974. The GDR maintained an embassy on Massachusetts Avenue near Dupont Circle in a leased property. In 1990 the facility was abandoned mid-lease on the reunification of the Federal Republic of Germany (FRG) and the GDR and, though the FRG agreed to assume all debts and obligations of the former East Germany, an attorney for the landlord would later write that "without disclosing any confidences, I can say that our client did not necessarily find the Federal Republic and its embassy entirely consistent in its public and private positions".[24][25][26]

The entrance of the German chancery pictured in 2014.

West Germany, along with Denmark and Switzerland, was a trailblazer in the use of modern architecture for diplomatic facilities in Washington. In 1964 it opened its new and current chancery, designed by Egon Eiermann. The building's design evoked the Bauhaus school and "was meant as a disavowal" of the Nazi architecture of Albert Speer.[26]

The chancery building and consular building underwent a $46.5 million renovation that was completed in 2014.[27]

The residence is located on the grounds of the chancery. It was constructed in 1994 from a design by O.M. Ungers, who aimed to "find an architectonic expression for the residence of the German ambassador that would be associative of the characteristics" of Germany.[28]

The Washington Post has called the residence "one of the most conspicuous diplomatic pads in town" and, in 2015, described it as "a Bauhaus-inspired take on classical Washington" that did not appear dated, even more than two decades after it was built.[29]