Ellesmere Island (Inuktitut: Umingmak Nuna, meaning "land of muskoxen"; French: Île d'Ellesmere)[1] is part of the Qikiqtaaluk Region in the Canadian territory of Nunavut. Lying within the Arctic Archipelago, it is considered part of the Queen Elizabeth Islands, with Cape Columbia being the most northerly point of land in Canada. It comprises an area of 196,235 km2 (75,767 sq mi) and the total length of the island is 830 km (520 mi), making it the world's tenth largest island and Canada's third largest island. The Arctic Cordillera mountain system covers much of Ellesmere Island, making it the most mountainous in the Arctic Archipelago. The Arctic willow is the only woody species to grow on Ellesmere Island.[2]

The first human inhabitants of Ellesmere Island were small bands drawn to the area for Peary caribou, muskox, and marine mammal hunting about 2000–1000 BCE.[3]

As was the case for the Dorset (or Paleo-Eskimo) hunters and the pioneering Neoeskimos, the post-Ruin Island and Late Thule culture Inuit used the Bache Peninsula region extensively both summer and winter until environmental, ecological, and possibly social circumstances caused the area to be abandoned. It was the last region in the Canadian High Arctic to be depopulated during the Little Ice Age, attesting to its general economic importance as part of the Smith Sound culture sphere of which it was occasionally a part and sometimes the principal settlement component.[4]

Vikings from the Greenland colonies reached Ellesmere Island, Skraeling Island, and Ruin Island during hunting expeditions and trading with the Inuit groups.[4] Unusual structures on Bache Peninsula may be the remains of a late-period Dorset stone longhouse.[5]

The first European to sight the island after the height of the Little Ice Age was William Baffin in 1616. Ellesmere Island was named in 1852 by Edward Inglefield's expedition after Francis Egerton, 1st Earl of Ellesmere.[6] The US expedition led by Adolphus Greely in 1881 crossed the island from east to west,[1]:631 establishing Fort Conger in the northern part of the island. The Greely expedition found fossil forests on Ellesmere Island in the late 1880s. Stenkul Fiord was first explored in 1902 by Per Schei, a member of Otto Sverdrup's 2nd Norwegian Polar Expedition. 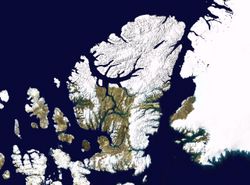 Ellesmere Island is separated to the east by Nares Strait from Greenland, to the west by Eureka Sound and Nansen Sound from Axel Heiberg Island, and to the south by Jones Sound and Cardigan Strait from Devon Island.

More than one-fifth of the island is protected as Quttinirpaaq National Park (formerly Ellesmere Island National Park Reserve), which includes seven fjords and a variety of glaciers, as well as Lake Hazen, North America's largest lake north of the Arctic Circle. Barbeau Peak, the highest mountain in Nunavut (2,616 m or 8,583 ft) is located in the British Empire Range on Ellesmere Island. The most northern mountain range in the world, the Challenger Mountains, is located in the northeast region of the island. The northern lobe of the island is called Grant Land.

In July 2007, a study noted the disappearance of habitat for waterfowl, invertebrates, and algae on Ellesmere Island. According to John Smol of Queen's University in Kingston, Ontario, and Marianne S. V. Douglas of the University of Alberta in Edmonton, warming conditions and evaporation have caused low water levels and changes in the chemistry of ponds and wetlands in the area. The researchers noted that "In the 1980s they often needed to wear hip waders to make their way to the ponds...while by 2006 the same areas were dry enough to burn."[8]

The Osborn Range of the Arctic Cordillera mountain system

The breakup of the Ellesmere Ice Shelves has continued in the 21st century: the Ward Ice Shelf experienced a major breakup during the summer of 2002;[13] the Ayles Ice Shelf calved entirely on August 13, 2005; the largest breakoff of the ice shelf in 25 years, it may pose a threat to the oil industry in the Beaufort Sea. The piece is 66 km2 (25 sq mi).[14] In April 2008, it was discovered that the Ward Hunt shelf was fractured, with dozens of deep, multi-faceted cracks[15] and in September 2008 the Markham shelf (50 km2 or 19 sq mi) completely broke off to become floating sea ice.[16]

A study published 2018 by White and Copland measured an areal reduction of 5.9% in 1773 glaciers in Northern Ellesmere island in the 16-year period 1999-2015 based on satellite data. In the same period 19 out of 27 ice tongues disintegrated to their grounding lines and ice shelves suffered a 42% loss in surface area.[17]

Schei and later Nathorst[18] described the Paleocene-Eocene (ca. 55 Ma) fossil forest in the Stenkul Fiord sediments. The Stenkul Fiord site represents a series of deltaic swamp and floodplain forests.[19] The trees stood for at least 400 years. Individual stumps and stems of >1 m (>3 ft) diameter were abundant, and are identified as Metasequoia and possibly Glyptostrobus. Well preserved Pliocene peats containing abundant vertebrate and plant macrofossils characteristic of a boreal forest have been reported from Strathcona Fiord.[20][21]

In 2006, University of Chicago paleontologist Neil Shubin and Academy of Natural Sciences paleontologist Ted Daeschler reported the discovery of the fossil of a Paleozoic (ca. 375 Ma) fish, named Tiktaalik roseae, in the former stream beds of Ellesmere Island. The fossil exhibits many characteristics of fish, but also indicates a transitional creature that may be a predecessor of amphibians, reptiles, birds, and mammals, including humans.[22]

In 2011, Jason P. Downs and co-authors described the sarcopterygian Laccognathus embryi from specimens collected from the same locality that Tiktaalik was found.[23]

Ellesmere Island is noted as being the northernmost occurrence of eusocial insects; specifically, the bumblebee Bombus polaris. There is a second species of bumblebee occurring there, Bombus hyperboreus, which is a parasite in the nests of B. polaris.[24]

While non-eusocial, the Arctic woolly bear moth (Gynaephora groenlandica) can also be found at Ellesmere Island. While this species generally has a 10-year life cycle, its life is known to extend to up to 14 years at both the Alexandra Fiord lowland and Ellesmere Island.[25][26][27]

In 2016, the population of Ellesmere Island was recorded as 191. There are three settlements on Ellesmere Island: Alert (pop. 62),[30] Eureka (permanent pop. 0, but home to a small temporary population), and Grise Fiord (pop. 129),[31] Politically, it is part of the Qikiqtaaluk Region.

Canadian Forces Station (CFS) Alert is the northernmost settlement in the world. With the end of the Cold War and the advent of new technologies allowing for remote interpretation of data, the overwintering population has been reduced to 62 civilians and military personnel as of 2016.

Grise Fiord (Inuktitut: ᐊᐅᔪᐃᑦᑐᖅ, romanized: Aujuittuqcode: iku promoted to code: iu , lit. "place that never thaws") is an Inuit hamlet that, despite a population of only 129,[30] is the largest community on Ellesmere Island.

Located at the southern tip of Ellesmere Island, Grise Fiord lies 1,160 km (720 mi) north of the Arctic Circle. Grise Fiord is the northernmost civilian settlement in Canada. It is also one of the coldest inhabited places in the world, with an average yearly temperature of −16.5 °C (2.3 °F).

Grise Fiord is cradled by the Arctic Cordillera mountain range.

Ellesmere Island is the setting of much of Melanie McGrath’s The Long Exile: A True Story of Deception and Survival Amongst the Inuit of the Canadian Arctic[32] about the High Arctic relocation, and also of her Edie Kiglatuk mystery series.[33]

In the 2013 American superhero film Man of Steel, Ellesmere Island was the site of a combined U.S.-Canadian scientific expedition to recover an ancient Kryptonian spaceship buried in the glacial ice pack.[34]

The island was the location for the 2014 BBC programme Snow Wolf Family and Me.[35]

Ellesmere Island (and in particular the Milne ice shelf) is a main location in Dan Brown's novel Deception Point.