ISBN (identifier) Special:BookSources/978-0-205-79241-2 Plutocracy
Group or class of persons enjoying superior intellectual, social or economic status
This article is about a sociological term. For the 1984 game, see Elite (video game). For the series, see Élite (TV series). For other uses, see Elite (disambiguation). 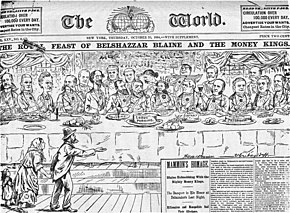 Political cartoon from October 1884, showing wealthy plutocrats feasting at a table while a poor family begs beneath

In political and sociological theory, the elite (French élite, from Latin eligere, to select or to sort out) are a small group of powerful people who hold a disproportionate amount of wealth, privilege, political power, or skill in a society. Defined by the Cambridge Dictionary, the "elite" are "those people or organizations that are considered the best or most powerful compared to others of a similar type."[1]

American sociologist C. Wright Mills states that the power elite members recognize other members' mutual exalted position in society.[2] "As a rule, 'they accept one another, understand one another, marry one another, tend to work, and to think, if not together at least alike'."[3][4] "It is a well-regulated existence where education plays a critical role. Youthful upper-class members attend prominent preparatory schools, which not only open doors to such elite universities as Harvard, Columbia, Dartmouth College, Yale, and Princeton, but also to the universities' highly exclusive clubs. These memberships in turn pave the way to the prominent social clubs located in all major cities and serving as sites for important business contacts".[5][6]

According to Mills, men receive the education necessary for elitist privilege to obtain their background and contacts, allowing them to enter three branches of the power elite, which are;

According to Mills, the governing elite in the United States primarily draws its members from political leaders, including the president, and a handful of key cabinet members, as well as close advisers, major corporate owners and directors, and high-ranking military officers.[9] These groups overlap and elites tend to circulate from one sector to another, consolidating power in the process.[10]

Unlike the ruling class, a social formation based on heritage and social ties, the power elite is characterized by the organizational structures through which its wealth is acquired. According to Mills, the power elite rose from "the managerial reorganization of the propertied classes into the more or less unified stratum of the corporate rich".[11] Domhoff further clarified the differences in the two terms: "The upper class as a whole does not do the ruling. Instead, class rule is manifested through the activities of a wide variety of organizations and institutions...Leaders within the upper class join with high-level employees in the organizations they control to make up what will be called the power elite".[12]

The Marxist theoretician Nikolai Bukharin anticipated the elite theory in his 1929 work, Imperialism and World Economy: "present-day state power is nothing but an entrepreneurs' company of tremendous power, headed even by the same persons that occupy the leading positions in the banking and syndicate offices".[13]

The power elite is a term used by Mills to describe a relatively small, loosely connected group of individuals who dominate American policymaking. This group includes bureaucratic, corporate, intellectual, military, media, and government elites who control the principal institutions in the United States and whose opinions and actions influence the decisions of the policymakers.[14] The basis for membership of a power elite is institutional power, namely an influential position within a prominent private or public organization.[5] A study of the French corporate elite has shown that social class continues to hold sway in determining who joins this elite group, with those from the upper-middle class tending to dominate.[15] Another study (published in 2002) of power elites in the United States under President George W. Bush (in office 2001-2009) identified 7,314 institutional positions of power encompassing 5,778 individuals.[16] A later study of U.S. society noted demographic characteristics of this elite group as follows:

Age
Corporate leaders aged about 60; heads of foundations, law, education, and civic organizations aged around 62; government employees aged about 56.
Gender
Men contribute roughly 80% in the political realm whereas women contribute roughly only 20% in the political realm. In the economic denomination, as of October 2017[update], only 32 (6.4%) of the Fortune 500 CEOs are women.[17]
Ethnicity
In the USA White Anglo-Saxons dominate in the power elite, with Protestants representing about 80% of the top business leaders, and about 73% of members of Congress. As of October 2017[update], only 4 (0.8%) of the Fortune 500 CEOs are African American.[17] In similarly low proportions, as of October 2017[update], 10 (2%) of the Fortune 500 CEOs are Latino, and 10 (2%) are Asian.[17]
Education
Nearly all the leaders have a college education, with almost half graduating with advanced degrees. About 54% of the big-business leaders, and 42% of the government elite graduated from just 12 prestigious universities with large endowments.
Social clubs
Most holders of top positions in the power elite possess exclusive membership to one or more social clubs. About a third belong to a small number of especially prestigious clubs in major cities like London, New York City, Chicago, Boston, and Washington, D.C.[18]

In the 1970s an organized set of policies promoted reduced taxes, especially for the wealthy, and a steady erosion of the welfare safety net.[19] Starting with legislation in the 1980s, the wealthy banking community successfully lobbied for reduced regulation.[20] The wide range of financial and social capital accessible to the power elite gives their members heavy influence in economic and political decision making, allowing them to move toward attaining desired outcomes. Sociologist Christopher Doob gives a hypothetical alternative, stating that these elite individuals would consider themselves the overseers of the national economy. Also appreciating that it is not only a moral, but a practical necessity to focus beyond their group interests. Doing so would hopefully alleviate various destructive conditions affecting large numbers of less affluent citizens.[5]

Mills determined that there is an "inner core" of the power elite involving individuals that are able to move from one seat of institutional power to another. They, therefore, have a wide range of knowledge and interests in many influential organizations, and are, as Mills describes, "professional go-betweens of economic, political, and military affairs".[21] Relentless expansion of capitalism and the globalizing of economic and military power, binds leaders of the power elite into complex relationships with nation states that generate global-scale class divisions. Sociologist Manuel Castells writes in The Rise of the Network Society that contemporary globalization does not mean that "everything in the global economy is global".[22] So, a global economy becomes characterized by fundamental social inequalities with respect to the "level of integration, competitive potential and share of the benefits from economic growth".[23] Castells cites a kind of "double movement" where on one hand, "valuable segments of territories and people" become "linked in the global networks of value making and wealth appropriation", while, on the other, "everything and everyone" that is not valued by established networks gets "switched off...and ultimately discarded".[23] The wide-ranging effects of global capitalism ultimately affect everyone on the planet, as economies around the world come to depend on the functioning of global financial markets, technologies, trade and labor.