Electrostatic induction, also known as "electrostatic influence" or simply "influence" in Europe and Latin America, is a redistribution of electric charge in an object, caused by the influence of nearby charges.[1] In the presence of a charged body, an insulated conductor develops a positive charge on one end and a negative charge on the other end.[1] Induction was discovered by British scientist John Canton in 1753 and Swedish professor Johan Carl Wilcke in 1762.[2] Electrostatic generators, such as the Wimshurst machine, the Van de Graaff generator and the electrophorus, use this principle. Due to induction, the electrostatic potential (voltage) is constant at any point throughout a conductor.[3] Electrostatic Induction is also responsible for the attraction of light nonconductive objects, such as balloons, paper or styrofoam scraps, to static electric charges. Electrostatic induction laws apply in dynamic situations as far as the quasistatic approximation is valid. Electrostatic induction should not be confused with Electromagnetic induction. 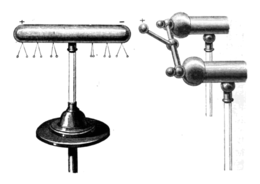 Demonstration of induction, in the 1870s. The positive terminal of an electrostatic machine (right) is placed near an uncharged brass cylinder (left), causing the left end to acquire a positive charge and the right to acquire a negative charge. The small pith ball electroscopes hanging from the bottom show that the charge is concentrated at the ends.

Styrofoam peanuts clinging to a cat's fur. The static electricity that builds up on the fur causes a polarization of the molecules of the styrofoam due to electrostatic induction, resulting in a slight attraction of the styrofoam to the charged fur.

A normal uncharged piece of matter has equal numbers of positive and negative electric charges in each part of it, located close together, so no part of it has a net electric charge. The positive charges are the atoms' nuclei which are bound into the structure of matter and are not free to move. The negative charges are the atoms' electrons. In electrically conductive objects such as metals, some of the electrons are able to move freely about in the object.

When a charged object is brought near an uncharged, electrically conducting object, such as a piece of metal, the force of the nearby charge due to Coulomb's law causes a separation of these internal charges. For example, if a positive charge is brought near the object (see picture of cylindrical electrode near electrostatic machine), the electrons in the metal will be attracted toward it and move to the side of the object facing it. When the electrons move out of an area, they leave an unbalanced positive charge due to the nuclei. This results in a region of negative charge on the object nearest to the external charge, and a region of positive charge on the part away from it. These are called induced charges. If the external charge is negative, the polarity of the charged regions will be reversed.

Since this process is just a redistribution of the charges that were already in the object, it doesn't change the total charge on the object; it still has no net charge. This induction effect is reversible; if the nearby charge is removed, the attraction between the positive and negative internal charges causes them to intermingle again.

Charging an object by induction 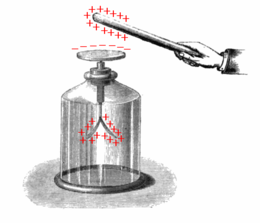 Gold-leaf electroscope, showing induction, before the terminal is grounded.

Play media
Using an electroscope to show electrostatic induction. The device has leaves/needle that become charged when introducing a charged rod to it. The leaves bend the leave/needle, and the stronger the static introduced, the more bending occurs.

This method can be demonstrated using a gold-leaf electroscope, which is an instrument for detecting electric charge. The electroscope is first discharged, and a charged object is then brought close to the instrument's top terminal. Induction causes a separation of the charges inside the electroscope's metal rod, so that the top terminal gains a net charge of opposite polarity to that of the object, while the gold leaves gain a charge of the same polarity. Since both leaves have the same charge, they repel each other and spread apart. The electroscope has not acquired a net charge: the charge within it has merely been redistributed, so if the charged object were to be moved away from the electroscope the leaves will come together again.

The sign of the charge left on the electroscope after grounding is always opposite in sign to the external inducing charge.[4] The two rules of induction are:[4][5]

The electrostatic field inside a conductive object is zero 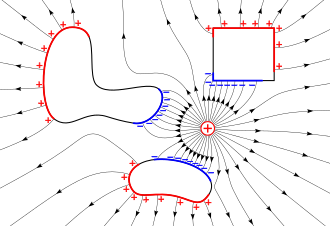 Surface charges induced in metal objects by a nearby charge. The electrostatic field (lines with arrows) of a nearby positive charge (+) causes the mobile charges in metal objects to separate. Negative charges (blue) are attracted and move to the surface of the object facing the external charge. Positive charges (red) are repelled and move to the surface facing away. These induced surface charges create an opposing electric field that exactly cancels the field of the external charge throughout the interior of the metal. Therefore electrostatic induction ensures that the electric field everywhere inside a conductive object is zero.

A remaining question is how large the induced charges are. The movement of charges is caused by the force exerted on them by the electric field of the external charged object, by Coulomb's law. As the charges in the metal object continue to separate, the resulting positive and negative regions create their own electric field, which opposes the field of the external charge.[3] This process continues until very quickly (within a fraction of a second) an equilibrium is reached in which the induced charges are exactly the right size to cancel the external electric field throughout the interior of the metal object.[3][6] Then the remaining mobile charges (electrons) in the interior of the metal no longer feel a force and the net motion of the charges stops.[3]

Induced charge resides on the surface

Since the mobile charges in the interior of a metal object are free to move in any direction, there can never be a static concentration of charge inside the metal; if there was, it would attract opposite polarity charge to neutralize it.[3] Therefore in induction, the mobile charges move under the influence of the external charge until they reach the surface of the metal and collect there, where they are constrained from moving by the boundary.[3]

This establishes the important principle that electrostatic charges on conductive objects reside on the surface of the object.[3][6] External electric fields induce surface charges on metal objects that exactly cancel the field within.[3]

The voltage throughout a conductive object is constant

then it will exert a force on a charge moving from

. Work will have to be done on the charge by a force to make it move to

against the opposing force of the electric field. Thus the electrostatic potential energy of the charge will increase. So the potential at point

is higher than at point

is the gradient (rate of change) of the electrostatic potential

, within a conductive object the gradient of the potential is zero[3]

Another way of saying this is that in electrostatics, electrostatic induction ensures that the potential (voltage) throughout a conductive object is constant.

A similar induction effect occurs in nonconductive (dielectric) objects, and is responsible for the attraction of small light nonconductive objects, like balloons, scraps of paper or Styrofoam, to static electric charges[7][8][9][10] (see cat, above), as well as static cling in clothes.

In nonconductors, the electrons are bound to atoms or molecules and are not free to move about the object as in conductors; however they can move a little within the molecules. If a positive charge is brought near a nonconductive object, the electrons in each molecule are attracted toward it, and move to the side of the molecule facing the charge, while the positive nuclei are repelled and move slightly to the opposite side of the molecule. Since the negative charges are now closer to the external charge than the positive charges, their attraction is greater than the repulsion of the positive charges, resulting in a small net attraction of the molecule toward the charge. This is called polarization, and the polarized molecules are called dipoles. This effect is microscopic, but since there are so many molecules, it adds up to enough force to move a light object like Styrofoam. This is the principle of operation of a pith-ball electroscope.[11]