Infinite Construction - STEAM
Electrical engineering involved in the design of electronic circuits, devices, and their systems 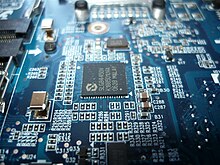 The Institute of Electrical and Electronics Engineers (IEEE) is one of the most important and influential organizations for electronics engineers based in the US. On an international level, the International Electrotechnical Commission (IEC) prepares standards for electronic engineering, developed through consensus and thanks to the work of 20,000 experts from 172 countries worldwide.

Electronic engineering as a profession sprang from technological improvements in the telegraph industry in the late 19th century and the radio and the telephone industries in the early 20th century. People were attracted to radio by the technical fascination it inspired, first in receiving and then in transmitting. Many who went into broadcasting in the 1920s were only 'amateurs' in the period before World War I.[4]

In the field of electronic engineering, engineers design and test circuits that use the electromagnetic properties of electrical components such as resistors, capacitors, inductors, diodes and transistors to achieve a particular functionality. The tuner circuit, which allows the user of a radio to filter out all but a single station, is just one example of such a circuit.

In designing an integrated circuit, electronics engineers first construct circuit schematics that specify the electrical components and describe the interconnections between them. When completed, VLSI engineers convert the schematics into actual layouts, which map the layers of various conductor and semiconductor materials needed to construct the circuit. The conversion from schematics to layouts can be done by software (see electronic design automation) but very often requires human fine-tuning to decrease space and power consumption. Once the layout is complete, it can be sent to a fabrication plant for manufacturing.

For systems of intermediate complexity, engineers may use VHDL modeling for programmable logic devices and FPGAs.

Telecommunications engineering deals with the transmission of information across a channel such as a co-axial cable, optical fiber or free space.

Once the transmission characteristics of a system are determined, telecommunication engineers design the transmitters and receivers needed for such systems. These two are sometimes combined to form a two-way communication device known as a transceiver. A key consideration in the design of transmitters is their power consumption as this is closely related to their signal strength. If the signal strength of a transmitter is insufficient the signal's information will be corrupted by noise.

Electromagnetics is an in-depth study about the signals that are transmitted in a channel (Wired or Wireless). This includes Basics of Electromagnetic waves, Transmission Lines and Waveguides, Antennas, its types and applications with Radio-Frequency (RF) and Microwaves. Its applications are seen widely in other sub-fields like Telecommunication, Control and Instrumentation Engineering.

Control engineering has a wide range of applications from the flight and propulsion systems of commercial airplanes to the cruise control present in many modern cars. It also plays an important role in industrial automation.

Control engineers often utilize feedback when designing control systems. For example, in a car with cruise control, the vehicle's speed is continuously monitored and fed back to the system which adjusts the engine's power output accordingly. Where there is regular feedback, control theory can be used to determine how the system responds to such feedback.

Instrumentation engineering deals with the design of devices to measure physical quantities such as pressure, flow and temperature. These devices are known as instrumentation.

The design of such instrumentation requires a good understanding of physics that often extends beyond electromagnetic theory. For example, radar guns use the Doppler effect to measure the speed of oncoming vehicles. Similarly, thermocouples use the Peltier–Seebeck effect to measure the temperature difference between two points.

Often instrumentation is not used by itself, but instead as the sensors of larger electrical systems. For example, a thermocouple might be used to help ensure a furnace's temperature remains constant. For this reason, instrumentation engineering is often viewed as the counterpart of control engineering.

Main article: Education and training of electrical and electronics engineers

Electronics engineers typically possess an academic degree with a major in electronic engineering. The length of study for such a degree is usually three or four years and the completed degree may be designated as a Bachelor of Engineering, Bachelor of Science, Bachelor of Applied Science, or Bachelor of Technology depending upon the university. Many UK universities also offer Master of Engineering (MEng) degrees at the graduate level.

Some electronics engineers also choose to pursue a postgraduate degree such as a Master of Science, Doctor of Philosophy in Engineering, or an Engineering Doctorate. The master's degree is being introduced in some European and American Universities as a first degree and the differentiation of an engineer with graduate and postgraduate studies is often difficult. In these cases, experience is taken into account. The master's degree may consist of either research, coursework or a mixture of the two. The Doctor of Philosophy consists of a significant research component and is often viewed as the entry point to academia.

In most countries, a bachelor's degree in engineering represents the first step towards certification and the degree program itself is certified by a professional body. Certification allows engineers to legally sign off on plans for projects affecting public safety.[18] After completing a certified degree program, the engineer must satisfy a range of requirements, including work experience requirements, before being certified. Once certified the engineer is designated the title of Professional Engineer (in the United States, Canada, and South Africa), Chartered Engineer or Incorporated Engineer (in the United Kingdom, Ireland, India, and Zimbabwe), Chartered Professional Engineer (in Australia and New Zealand) or European Engineer (in much of the European Union).

A degree in electronics generally includes units covering physics, chemistry, mathematics, project management and specific topics in electrical engineering. Initially, such topics cover most, if not all, of the subfields of electronic engineering. Students then choose to specialize in one or more subfields towards the end of the degree.

Fundamental to the discipline are the sciences of physics and mathematics as these help to obtain both a qualitative and quantitative description of how such systems will work. Today most engineering work involves the use of computers and it is commonplace to use computer-aided design and simulation software programs when designing electronic systems. Although most electronic engineers will understand basic circuit theory, the theories employed by engineers generally depend upon the work they do. For example, quantum mechanics and solid state physics might be relevant to an engineer working on VLSI but are largely irrelevant to engineers working with embedded systems.

Apart from electromagnetics and network theory, other items in the syllabus are particular to electronics engineering course. Electrical engineering courses have other specialisms such as machines, power generation and distribution. This list does not include the extensive engineering mathematics curriculum that is a prerequisite to a degree.[19][20]

For most engineers not involved at the cutting edge of system design and development, technical work accounts for only a fraction of the work they do. A lot of time is also spent on tasks such as discussing proposals with clients, preparing budgets and determining project schedules. Many senior engineers manage a team of technicians or other engineers and for this reason, project management skills are important. Most engineering projects involve some form of documentation and strong written communication skills are therefore very important.

Obsolescence of technical skills is a serious concern for electronics engineers. Membership and participation in technical societies, regular reviews of periodicals in the field and a habit of continued learning are therefore essential to maintaining proficiency. And these are mostly used in the field of consumer electronics products.[36]