The electoral threshold, or election threshold, is the minimum share of the primary vote which a candidate or political party requires to achieve before they become entitled to any representation in a legislature. This limit can operate in various ways. For example, in party-list proportional representation systems an electoral threshold requires that a party must receive a specified minimum percentage of votes (e.g. 5%), either nationally or in a particular electoral district, to obtain any seats in the legislature. In multi-member constituencies using preferential voting, besides the electoral threshold, to be awarded a seat, a candidate is also required to achieve a quota, either on the primary vote or after distribution of preferences, which depends on the number of members to be return from a constituency.

The effect of an electoral threshold is to deny representation to small parties or to force them into coalitions, with the presumption of rendering the election system more stable by keeping out fringe parties. However, critics argue out that in the absence of a ranked ballot system, supporters of minor parties are effectively disenfranchised and denied the right of representation by someone of their choosing.

Two boundaries can be defined—a threshold of representation is the minimum vote share that might yield a party a seat (under the most favorable circumstances for the party) while the threshold of exclusion is the maximum vote share that could be insufficient to yield a seat (under the least favorable circumstances). Lijphart suggested calculating the informal threshold as the mean of these.[1] 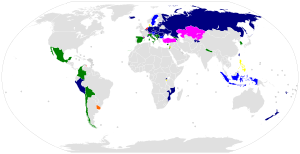 In Poland's Sejm, Germany's Bundestag and New Zealand's House of Representatives, the threshold is 5% (in Poland, additionally 8% for a coalition of two or more parties submitting a joint electoral list). However, in Germany and New Zealand, if a party wins a minimum number of directly elected seats—three in Germany and one in New Zealand—the threshold does not apply (in Germany the directly elected seats are kept regardless). The threshold is 3.25% in Israel's Knesset (it was 1% before 1992, 1.5% in 1992–2003 and 2% 2003–2014) and 10% in the Turkish parliament. In Poland, ethnic minority parties do not have to reach the threshold level to get into the parliament and so there is always a small German minority representation in the Sejm. In Romania, for the ethnic minority parties there is a different threshold than for the national parties that run for the Chamber of Deputies.

There are also countries such as Portugal, South Africa, Finland, the Netherlands and North Macedonia that have proportional representation systems without a legal threshold, although the Netherlands has a rule that the first seat can never be a remainder seat, which means that there is an effective threshold of 100% divided by the total number of seats (with 150 seats to allocate, this threshold is currently 0.67%). In the Slovenian parliamentary elections of 1992 and 1996, the threshold was set at 3 parliamentary seats. This meant that the parties needed to win about 3.2% of the votes in order to pass the threshold. In 2000, the threshold was raised to 4% of the votes.

In Sweden, there is a nationwide threshold of 4%, but if a party reaches 12% in one election district, it will take part in the seat allocation for that district. However, through the 2014 election nobody has been elected based on the 12% rule. In Norway, the nationwide electoral threshold of 4% applies only to leveling seats. A party with sufficient local support may still win the regular district seats, even if the party fails to meet the threshold. Following the 2009 election, the Liberal Party won two seats in this manner.

In Australia, which uses a single transferable vote proportional representation system, they avoided the need for a formal electoral threshold by establishing smaller electorates with each multi-member electorate returning fewer members of a Parliament and as such requiring a higher quota percentage in order to be elected. As Australia also uses a ranked voting system supporters of minor parties are not disenfranchised as their votes are redistributed to other candidates according to the voter's nominated order of preference which can then form part of another candidates winning quota.

In the United States, as the majority of elections are conducted under the first-past-the-post system, legal electoral thresholds do not apply in the actual voting. However, several states have threshold requirements for parties to obtain automatic ballot access to the next general election without having to submit voter-signed petitions. The threshold requirements have no practical bearing on the two main political parties (the Republican and Democratic parties) as they easily meet the requirements, but have come into play for minor parties such as the Green and Libertarian parties. The threshold rules also apply for independent candidates to obtain ballot access.

Countries can have more than one threshold. Germany, as mentioned earlier, has a regular threshold of 5%, but a party winning three constituency seats in the Bundestag can gain additional representation even if it has achieved under 5% of the total vote. Most multiple-threshold systems are still in the proposal stage. Electoral thresholds are often implemented with the intention of bringing stability to the political system.

The Parliamentary Assembly of the Council of Europe recommends for parliamentary elections a threshold not higher than 3%.[2] However, a 2007 European Court of Human Rights decision, Yumak and Sadak v. Turkey, held that Turkey's 10% threshold did not violate Article 3 of Protocol 1 of the ECHR (right to free elections).[3] Because Turkey has no limits for independent candidates, the 10% rule has to some extent been circumvented by parties running candidates as independents.[4]

The number of seats in each electoral district creates a natural threshold (also called a hidden, or effective, or informal threshold). The number of votes that means that a party is guaranteed a seat can be calculated by the formula (

) where ε is the smallest possible number of votes. That means that in a district with four seats slightly more than 20% of the votes will guarantee a seat. Under more favorable circumstances, the party can still win a seat with fewer votes.[29] The most important factor in determining the natural threshold is the number of seats to be filled by the district. Other less important factors are the seat allocation formula (D'Hondt, Saint-Laguë, LR-Droop or Hare), the number of contestant political parties and the size of the assembly. Generally, smaller districts leads to a higher proportion of votes needed to win a seat and vice versa.[30] The lower bound (the threshold of representation or the percentage of the vote that allows a party to earn a seat under the most favorable circumstances) is more difficult to calculate. In addition to the factors mentioned earlier, the number of votes cast for smaller parties are important. If more votes are cast for parties that do not win any seat, that will mean a lower percentage of votes needed to win a seat.[29]

Notable failures to reach the threshold

Examples of elections where established parties fell below the threshold:

Electoral thresholds can sometimes seriously affect the relationship between the percentages of the popular vote achieved by each party and the distribution of seats.

In the Russian parliamentary elections in 1995, with a threshold excluding parties under 5%, more than 45% of votes went to parties that failed to reach the threshold. In 1998, the Russian Constitutional Court found the threshold legal, taking into account limits in its use.[31]

There had been a similar situation in Turkey, which has a 10% threshold, easily higher than in any other country.[32] The justification for such a high threshold was to prevent multi-party coalitions and put a stop to the endless fragmentation of political parties seen in the 1960s and 1970s. However, coalitions ruled between 1991 and 2002, but mainstream parties continued to be fragmented and in the 2002 elections as many as 45% of votes were cast for parties which failed to reach the threshold and were thus unrepresented in the parliament.[33]

In the Ukrainian elections of March 2006, for which there was a threshold of 3% (of the overall vote, i.e. including invalid votes), 22% of voters were effectively disenfranchised, having voted for minor candidates. In the parliamentary election held under the same system, fewer voters supported minor parties and the total percentage of disenfranchised voters fell to about 12%.

In Bulgaria, 24% of voters cast their ballots for parties that would not gain representation in the elections of 1991 and 2013.

In the Philippines where party-list seats are only contested in 20% of the 287 seats in the lower house,[clarification needed] the effect of the 2% threshold is increased by the large number of parties participating in the election, which means that the threshold is harder to reach. This led to a quarter of valid votes being wasted, on average and led to the 20% of the seats never being allocated due to the 3-seat cap[clarification needed] In 2007, the 2% threshold was altered to allow parties with less than 1% of first preferences to receive a seat each and the proportion of wasted votes reduced slightly to 21%, but it again increased to 29% in 2010 due to an increase in number of participating parties. These statistics take no account of the wasted votes for a party which is entitled to more than three seats but cannot claim those seats due to the three-seat cap.[clarification needed]

Electoral thresholds can produce a spoiler effect, similar to that in the first-past-the-post voting system, in which minor parties unable to reach the threshold take votes away from other parties with similar ideologies. Fledgling parties in these systems often find themselves in a vicious circle: if a party is perceived as having no chance of meeting the threshold, it often cannot gain popular support; and if the party cannot gain popular support, it will continue to have little or no chance of meeting the threshold. As well as acting against extremist parties, it may also adversely affect moderate parties if the political climate becomes polarized between two major parties at opposite ends of the political spectrum. In such a scenario, moderate voters may abandon their preferred party in favour of a more popular party in the hope of keeping the even less desirable alternative out of power.

In contrast, elections which use the ranked voting system can take account of each voter's complete indicated ranking preference. For example, the single transferable vote redistributes first preference votes for candidates below the threshold. This permits the continued participation in the election by those whose votes would otherwise be wasted. Minor parties can indicate to their supporters before the vote how they would wish to see their votes transferred. (The single transferable vote is a proportional voting system designed to achieve proportional representation through ranked voting in multi-seat (as opposed to single seat) organizations or constituencies (voting districts).[34]) Ranked voting systems are widely used in Australia and Ireland. Other methods of introducing ordinality into an electoral system can have similar effects.