Enlarge Venice Commission Congress of the Council of Europe
This article is about monitoring by independent observers. For monitoring by agents of candidates, see Polling agent and Counting agent. 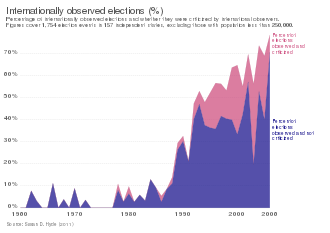 Election monitoring is the observation of an election by one or more independent parties, typically from another country or a non-governmental organization (NGO), primarily to assess the conduct of an election process on the basis of national legislation and international election standards. There are national and international election observers. Monitors do not directly prevent electoral fraud, but rather record and report such instances. Election observation increasingly looks at the entire electoral process over a longer period of time, rather than at election-day proceedings only. The legitimacy of an election can be affected by the criticism of monitors, provided that they are themselves seen as unbiased. A notable individual is often appointed honorary leader of a monitoring organization in an effort to enhance its own legitimacy.

The first monitored election was that of an 1857 plebiscite in Moldavia and Wallachia (current Romania) that was monitored by most of the major European powers. Election monitoring was uncommon until after World War II. During the 1960s, less than 10% of elections were monitored.[1] Election observation activities have expanded significantly following the end of the Cold War, along with the development of international standards on the conduct of democratic elections and the process of monitoring elections by both international[2] and domestic[3] observing organizations. By the 2000s, about 80% of all elections were observed.[1]

OSCE observers monitoring a polling station in Georgia in 2018.

International organizations such as the Organization of American States, the Organization for Security and Co-operation in Europe (OSCE), the European Union, the Commonwealth Secretariat, the Council of Europe, and the African Union regularly deploy monitoring teams. The United Nations no longer provides monitoring services; instead, it focuses on electoral assistance. Individual governments also participate in monitoring efforts, generally under the umbrella of an international organization. These national efforts are normally managed by the local electoral commission. A wide array of NGOs also participate in monitoring efforts. The Carter Center, for example, played a key role—with the United Nations Electoral Assistance Division and the National Democratic Institute—in building consensus on a common set of international principles for election observation.[4]

International observation is complemented in many countries by domestic observer groups.

Standard international election observation missions, as deployed by, for the example, the European Commission or the OSCE Office for Democratic Institutions and Human Rights (ODIHR), monitor the entire electoral process. Election experts and long-term observers begin their work weeks before the actual election day, looking at candidate registration, the legal framework, the media situation, the work of the election administration, and the campaign environment. On election day, short-term observers monitor the opening of polling stations, the vote cast, and the counting and tabulation of results. After election day, observers remain in the country for another few weeks to monitor how possible election-related shortcomings and complaints are dealt with by the election administration and the judiciary. The findings of the observers are made public in reports issued after election day.

Most observation missions send a small number of long-term monitors (known as LTOs) for a period of six to eight weeks. A larger number of short-term observers (known as STOs) then join the mission for the final week of the campaign. STOs provide mostly quantitative observation of polling station and count procedures, with LTOs supplying qualitative analysis and contextual information about the wider political situation.[citation needed]

In some cases, the objectivity of some international observers is questioned.[5]

In addition to international organizations monitoring elections, citizen organizations—or coalitions of organizations—also monitor elections in their own country. Free and Fair Election Network (FAFEN) in Pakistan is a coalition of 42 national civil society organizations working together to promote fair elections in Pakistan. The most common type of domestic election monitoring comes by way of party poll-watchers, who are partisan individuals that are looking out for the interests of their party. Election day activities of partisan observation groups often included scrutinizing the accreditation, voting, counting, and tabulations processes at polling units throughout election day.

There are, however, also numerous domestic nonpartisan observer groups in many countries.

Though most international observer organizations have a mandate to observe parliamentary elections, the Congress of the Council of Europe, in cooperation with the Venice Commission, is specifically mandated to monitor local and regional elections and is unique in this regard. Since 1990, over 50 election processes have been observed by the Congress.

The Congress Strategy on election observation is based on three lines of action: