Advertisement - You can get this game from STEAM
See also: Elbe (disambiguation)
Not to be confused with the island of Elba.
Major river in Central Europe

listen); Low German: Elv, Upper and Lower Sorbian: Łobjo, historically in English also Elve[1][2][3]) is one of the major rivers of Central Europe. It rises in the Krkonoše Mountains of the northern Czech Republic before traversing much of Bohemia (western half of the Czech Republic), then Germany and flowing into the North Sea at Cuxhaven, 110 km (68 mi) northwest of Hamburg. Its total length is 1,094 kilometres (680 mi).[4]

The Elbe river basin, comprising the Elbe and its tributaries, has a catchment area of 148,268 square kilometres (57,247 sq mi), the twelfth largest in Europe. The basin spans four countries, however it lies almost entirely just in two of them, Germany (65.5%) and the Czech Republic (33.7%, covering about two thirds of the state's territory). Marginally, the basin stretches also to Austria (0.6%) and Poland (0.2%). The Elbe catchment area is inhabited by 24.4 million people, the biggest cities within are Berlin, Hamburg, Prague, Dresden and Leipzig.[4]

In the Czech Republic

The Elbe rises at an elevation of about 1,400 metres (4,593 ft) in the Krkonoše (also known as Giant Mountains or in German as Riesengebirge) on the northwest borders of the Czech Republic near Labská bouda. Of the numerous small streams whose waters compose the infant river, the most important is the Bílé Labe, or White Elbe. After plunging down the 60 metres (197 ft) of the Labský vodopád, or Elbe Falls, the latter stream unites with the steeply torrential Malé Labe, and thereafter the united stream of the Elbe pursues a southerly course, emerging from the mountain glens at Jaroměř, where it receives Úpa and Metuje.

Here the Elbe enters the vast vale named Polabí (meaning "land along the Elbe"), and continues on southwards through Hradec Králové (where Orlice flows in) and then to Pardubice, where it turns sharply to the west. At Kolín some 43 kilometres (27 mi) further on, it bends gradually towards the north-west. At the village of Káraný, a little above Brandýs nad Labem, it picks up the Jizera.

At Mělník its stream is more than doubled in volume by the Vltava, or Moldau, a major river which winds northwards through Bohemia. Upstream from the confluence the Vltava is in fact much longer (434 kilometres (270 mi) against 294 kilometres (183 mi) of the Elbe so far), and has a greater discharge and a larger drainage basin. Nonetheless, for historical reasons the river retains the name Elbe, also because at the confluence point it is the Elbe that flows through the main, wider valley while the Vltava flows into the valley to meet the Elbe at almost a right angle, and thus appears to be the tributary river.

Some distance lower down, at Litoměřice, the waters of the Elbe are tinted by the reddish Ohře (Eger). Thus augmented, and swollen into a stream 140 metres (459 ft) wide, the Elbe carves a path through the basaltic mass of the České Středohoří, churning its way through a picturesque, deep, narrow and curved rocky gorge.

Shortly after crossing the Czech-German frontier, and passing through the sandstone defiles of the Elbe Sandstone Mountains, the stream assumes a north-westerly direction, which on the whole it preserves right to the North Sea.

The river rolls through Dresden and finally, beyond Meißen, enters on its long journey across the North German Plain passing along the former western border of East Germany, touching Torgau, Wittenberg, Dessau, Magdeburg, Wittenberge, and Hamburg on the way, and taking on the waters of the Mulde and Saale from the west, and those of the Schwarze Elster, Havel and Elde from the east. In its northern section both banks of the Elbe are characterised by flat, very fertile marshlands (Elbe Marshes), former flood plains of the Elbe now diked.

The Middle Elbe in the North German Plain near the village of Gorleben. In this section, the river had been part of the Iron Curtain between West and East Germany during the Cold War. For that reason, the river banks even today look relatively natural and undeveloped.

From the sluice of Geesthacht (at kilometre 586) on downstream the Elbe is subject to the tides, the tidal Elbe section is called the Low Elbe (Unterelbe). Soon the Elbe reaches Hamburg. Within the city-state the Unterelbe has a number of branch streams, such as Dove Elbe, Gose Elbe, Köhlbrand, Northern Elbe (Norderelbe), Reiherstieg, Southern Elbe (Süderelbe). Some of which have been disconnected for vessels from the main stream by dikes. In 1390 the Gose Elbe (literally in English: shallow Elbe) was separated from the main stream by a dike connecting the two then-islands of Kirchwerder and Neuengamme. The Dove Elbe (literally in English: deaf Elbe) was diked off in 1437/38 at Gammer Ort. These hydraulic engineering works were carried out to protect marshlands from inundation, and to improve the water supply of the Port of Hamburg. After the heavy inundation by the North Sea flood of 1962 the western section of the Southern Elbe was separated, becoming the Old Southern Elbe, while the waters of the eastern Southern Elbe now merge into the Köhlbrand, which is bridged by the Köhlbrandbrücke, the last bridge over the Elbe before the North Sea.

The Northern Elbe passes the Elbe Philharmonic Hall and is then crossed under by the old Elbe Tunnel (Alter Elbtunnel), both in Hamburg's city centre. A bit more downstream the Low Elbe's two main anabranches Northern Elbe and the Köhlbrand reunite south of Altona-Altstadt, a locality of Hamburg. Right after both anabranches reunited the Low Elbe is passed under by the New Elbe Tunnel (Neuer Elbtunnel), the last structural road link crossing the river before the North Sea. At the bay Mühlenberger Loch in Hamburg at kilometre 634, the Northern Elbe and the Southern Elbe (here now the cut-off meander Old Southern Elbe) used to reunite, which is why the bay is seen as the starting point of the Lower Elbe (Niederelbe). Leaving the city-state the Lower Elbe then passes between Holstein and the Elbe-Weser Triangle with Stade until it flows into the North Sea at Cuxhaven. Near its mouth it passes the entrance to the Kiel Canal at Brunsbüttel before it debouches into the North Sea. 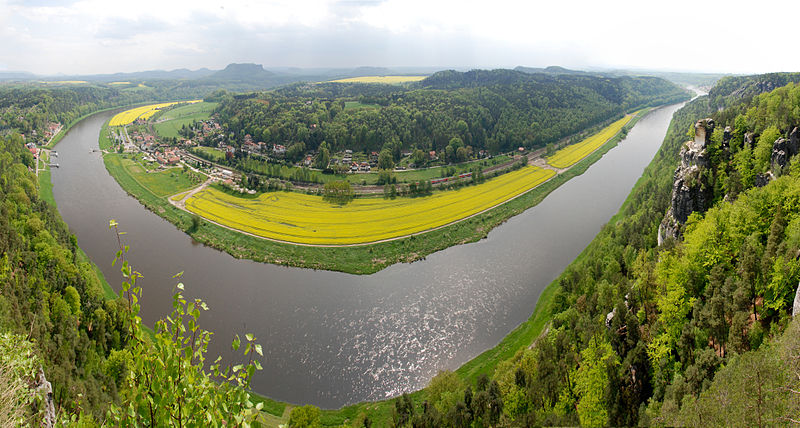 View of the Elbe in Saxon Switzerland, an area in Germany

The Port of Hamburg on the Elbe

The Elbe has always been navigable by commercial vessels,[5] and provides important trade links as far inland as Prague. The river is linked by canals (Elbe Lateral Canal, Elbe-Havel Canal, Mittellandkanal) to the industrial areas of Germany and to Berlin. The Elbe-Lübeck Canal links the Elbe to the Baltic Sea, as does the Kiel Canal, whose western entrance is near the mouth of the Elbe. The Elbe-Weser Shipping Channel connects the Elbe with the Weser.

By the Treaty of Versailles the navigation on the Elbe became subject to the International Commission of the Elbe, seated in Dresden.[6] The statute of the Commission was signed in Dresden on February 22, 1922.[7] Following articles 363 and 364 of the Treaty of Versailles, Czechoslovakia was entitled to lease its own harbour bassin, Moldauhafen in Hamburg. The contract of lease with Germany, and supervised by the United Kingdom, was signed on February 14, 1929 ending in 2028. Since 1993 the Czech Republic holds the former Czechoslovak legal position.

Before Germany was reunited, waterway transport in Western Germany was hindered by the fact that inland navigation to Hamburg had to pass through the German Democratic Republic. The Elbe-Seitenkanal (Elbe Lateral Canal) was built between the West German section of the Mittellandkanal and the Lower Elbe to restore this connection. When the two nations were reunited, works were begun to improve and restore the original links: the Magdeburg Water Bridge now allows large barges to cross the Elbe without having to enter the river. The often low water levels of the Elbe no longer hinder navigation to Berlin.[8] 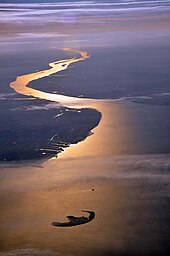 Between Northern and Southern Elbe (Norderelbe/Süderelbe) 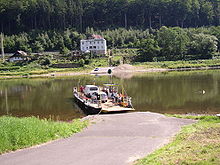 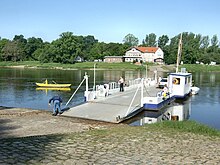 The Elbe is crossed by many ferries, both passenger and car carrying. In downstream order, these include:[9]

Many of these ferries are traditional reaction ferries, a type of cable ferry that uses the current flow of the river to provide propulsion. 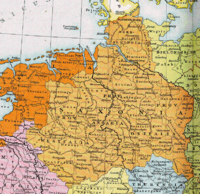 Albis or Albia are old medieval names for the river Elbe

Humans first lived in the northern Elbe region before about 200,000 years ago, during the Middle Paleolithic.

Ptolemy recorded the Elbe as Albis (Germanic for "river") in Germania Magna, with its source in the Asciburgis mountains (Krkonoše, Riesengebirge or Giant Mountains), where the Germanic Vandalii then lived. 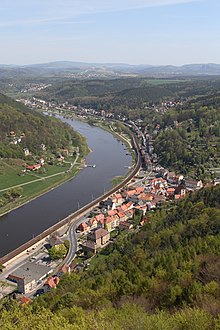 The Elbe near Festung Königstein in Germany

The Elbe has long served as an important delineator of European geography. The Romans knew the river as the Albis; however, they made only one serious attempt to move the border of their empire forward from the Rhine to the Elbe, and this attempt failed with the Battle of the Teutoburg Forest in 9 AD, after which they never seriously tried again. In the Middle Ages the Elbe formed the eastern limit of the Empire of Charlemagne (King of the Franks from 769 to 814). The river's navigable sections were essential to the success of the Hanseatic League in the Late Middle Ages, and much trade was carried on its waters.

From the early 6th century Slavic tribes (known as the Polabian Slavs) settled in the areas east of the rivers Elbe and Saale (which had been depopulated since the 4th century). In the 10th century the Ottonian Dynasty (dominant from 919 to 1024) began conquering these lands; a slow process of Germanization ensued, including the Wendish Crusade of 1147.

The Elbe delineated the western parts of Germany from the eastern so-called East Elbia, where soccage and serfdom were more strict and prevailed longer than westwards of the river, and where feudal lords held bigger estates than in the west. Thus incumbents of huge land-holdings became characterised[when?] as East Elbian Junkers. The Northern German area north of the Lower Elbe used to be called North Albingia in the Middle Ages. When the four Lutheran church bodies there united in 1977 they chose the name North Elbian Evangelical Lutheran Church. Other, administrative units were named after the river Elbe, such as the Westphalian Elbe département (1807–1813) and Lower Elbe département (1810), and the French département Bouches-de-l'Elbe (1811–1814).

In 1945, as World War II drew to a close, Nazi German territory came under attack from the armies of the western Allies advancing from the west and those of the Soviet Union advancing from the east. On 25 April 1945 these two forces linked up near Torgau, on the Elbe. The victorious countries marked the event unofficially as Elbe Day. From 1949 to 1990 the Elbe formed part of the Inner German border between East Germany and West Germany.

During the 1970s the Soviet Union stated that Adolf Hitler's ashes had been scattered in the Elbe following disinterment from their original burial-site.[12][13]