In 1927 the office of the Inspector General was created, which governed with martial law.[5] The province was included in the first Inspectorate General (Umumi Müfettişlik, UM) over which the Inspector General ruled. The UM span over the provinces of Hakkâri, Siirt, Van, Mardin, Bitlis, Sanlıurfa, Elaziğ and Diyarbakır.[6] In December 1935, the Tunceli Law was passed, which demanded a more powerful Government in the region.[7] In January 1936 the Elaziğ province was transferred under the authority of the newly established Fourth Inspectorate General, which span over the provinces of Elaziğ, Erzincan, Bingöl and Tunceli[8] and its seat was in the city of Elazığ.[9] The fourth UM was governed by a Governor-Commander. Most of the employees in the municipalities had to be from the military and the Governor-Commander had the authority to evacuate whole villages and resettle them in another part of the province.[10] In 1946 the Tunceli Law was abolished and the state of emergency removed but the authority of the fourth UM was transferred to the military.[10]

The Inspectorates General were dissolved in 1952 during the Government of the Democrat Party.[11]

Elâzığ stretches in a general west-southwest to east-northeast direction, along the line of equal geographic latitude and longitude. The source of the Euphrates river is located in this province. 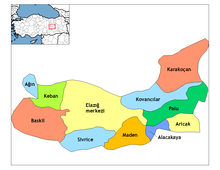 Elâzığ province is divided into 11 districts (capital district in bold):

Historically, Elazığ Province produced silver, which ceased being mined in 1885. The Turkish government attempted to modernize the mines; however, the cost of fuel and energy caused the shut down. There was a silver mine still producing in 1903 in Palu, as with coal. Coal is also found in other areas of the province. Gold and salt was also produced.[13]

Education is provided by the Elâzığ Provincial Directorate for National Education. It currently views over 442 educational institutions, both formal and informal ones.[14]

Altinova, Elazig was an important archaeological site in the Altınova plain that was excavated in the 1970s. It was later flooded by the Keban Dam. Other sites in the Altinova plain were also Tepecik, Korucutepe, Değirmentepe, and Körtepe.