El Poblado is the 14th commune in the metropolitan area of the city of Medellín, Colombia. According to a 2005 census the population was 94,704, distributed among its land area of 23 km2, and by the year 2015, it had a population of 128,839.[1][2] The comuna consists of 24 barrios, and is located in the south-east of the city. Its western boundary with the comuna of Guayabal runs along the Medellín River; to the south, it borders the city of Envigado, to the east, the township of Santa Elena, and to the north, the comunas of La Candelaria and Buenos Aires.

El Poblado is also known as Las Manzanas de Oro (The Golden Blocks)[4] because it is the main center of the industrial and commercial life of the second largest economy of Colombia.

The name El Poblado (The Village) derives from the first Spanish settlement of the Aburrá Valley in 1616 that was built in what is today its main square. In 1675, the Spanish administration founded another village in El Sitio de Aná (The Aná Place), today's Berrío Square, designed to become the center of the future Medellín; instead, El Poblado itself became the main economic center during the 20th century.

The Spanish explorer Francisco Herrera y Campuzano established the first European settlement in the Aburrá Valley, in what is today El Poblado Square, by a royal edict of March 2, 1616. The new village, called San Lorenzo de Aburrá had a population of 80 indigenous people. A later edict stated that indigenous people, white and mestizos, could not live together, and by 1675, the Spanish administration moved the center to a new village in what is today the Berrio Square. El Poblado became a marginalized township until the 20th century.

In 1845, the parish was given the name San José del Poblado and had a plaza, streets and land for sale.[4] At that time the most famous fincas (estates) were Provenza, Manila, Patio Bonito, Vizcaya, Castropol and Astorga, that would remain the barrio names. 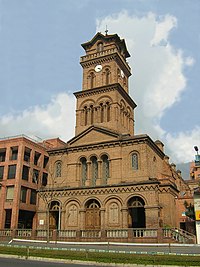 The Saint Joseph of El Poblado Church in the main square of the district marks the place where Medellín was founded in 1616.

At the beginning of the 20th century, El Poblado was the preferred area for wealthy families of the city to buy rural villas. At the time, travel between El Poblado and Medellín was difficult, but the area was attractive for the industrialists and business families that settled Barrio Prado in what is now the downtown area. With the construction of the Medellín - El Poblado Avenue, the land became valuable for urban settlements, and the villas or "fincas" were built in Envigado. During the 1930s, farming families from outlying areas came to Medellín looking for new opportunities, and were attracted by the industrialization of the city in El Poblado. This inspired the creation of a new barrio, Barrio Lleras, financed by Banco Central Hipotecario.

In the 1950s, El Poblado was included in the city due to the extension of industrial activities along the Medellín River to the south. The rich families of Barrio Prado started to move to El Poblado because La Candelaria became overpopulated and the land rose in price.

In the 1970s El Poblado became the place for Medellín's wealthy residents and was the second urban center; it was given the nickname Milla de Oro (Golden Mile) and the Zona Rosa was established – an exclusive tourist area for business, night clubs and general activities for locals and visitors.

A view of El Poblado Commune.

El Poblado consists of 1,432.58 hectares (3,539 acres), encompassing 39% of the Medellín municipality. It is located in the southeastern zone of the city towards the mountains of the Aburrá Valley. The Medellín River borders its western side, separating it from the Guayabal Commune and its elevation east of the river rises from approximately 1,538 meters (5,046 feet) above sea level to over 2,000 meters (6,562 feet) at its highest point.

Several streams descending from the eastern mountain flow into the Medellín River and pass throughout El Poblado. The most important ones are El Poblado and Aguacatala creeks. 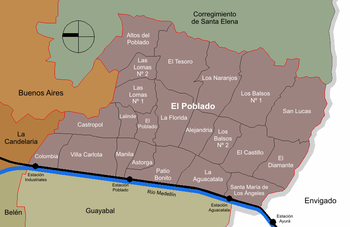 The commune is divided into 22 "barrios" or neighborhoods:[7]

The main streets of the Comunas are oriented north to south following the direction of the Medellín River. Due to the undulating and varied relief of the area, there are many kind of streets, which are often named due to their orientation:

El Poblado follows the Medellín tradition of using names for the streets, rather than numbers, though it has its own kind of numbering for its streets (calles), different from the rest of the Medellín municipality. The number of the calles (those that go from east to west) increase from south to north: Calle 1 at the south of the city and Calle 120 at its north. However Calle 1 in El Poblado. which starts the increasing of numbers of the streets from north to south. is distinguished by the word "sur" (south): Calle 1Sur is at the northern part of El Poblado and Calle 10Sur is at its south.

A view of El Poblado Avenue toward its north.

This is one of the main thoroughfares in Medellín,[8] and it changes name several times along the eastern mountain of the city connecting the most northern barrios of Medellín like Manrique to the southern Envigado. In El Poblado it has the name of the comunas, starting at its intersection with the 30th Avenue (Calle 30) at its north and connecting with the El Poblado - Envigado at its south. The avenue passes by El Poblado Square and Calle 10 (10th Street), which is noted for its thriving commerce and nightlife.

The avenue is oriented north to south and runs along the eastern side of the Medellín River and is the urban limit of the Commune. It is also the continuation of Industrialist Avenue (Avenida los Industriales) that starts in 33rd Street finishing in 10th Street, where it becomes Las Vegas until the end of the commune in the south.

This is a road that connects Medellín to the near eastern region of the Antioquia State (for example to La Ceja and El Retiro). The road is also the eastern limit of the commune and has many commercial buildings, hotels, restaurants and places to view the Aburrá Valley. The road starts in the intersection of 33rd Street and El Poblado Avenue. It is a long ascent to the eastern mountain, which gives a good view of the valley. There is also a small and twisting road that goes from the center of the commune to the highway crossing and named La Cola del Zorro (The Tail of the Fox road).

The commune is connected to the Guayabal Commune in the west by four bridges crossing the Medellín River in the following streets:

The Metro of Medellín has three stations in the city of El Poblado along the 1st Line going from north to south through the Industrials and Las Vegas Avenue.

The buses from Medellín to the towns of Envigado and Sabaneta also run through El Poblado.

The Metroplus is a new transportation project in Medellín that will integrate the current subway stations to different sectors of the city. In the case of El Poblado, the Metroplus will provide service from the Industrialists Station near El Poblado Avenue to Zúñiga Creek. It will have 12 stations. 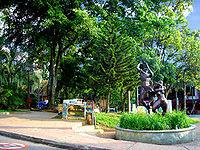 El Poblado contains some of the more well known squares and malls of Medellín.

As a commercial city the Medellín malls are considered amongst the best in Colombia[citation needed] and the ones in El Poblado lead the way. Some of the more important malls are:

The library of Eafit University.

The commune has the highest level of education of the city[citation needed] with several private and government-owned schools and colleges. 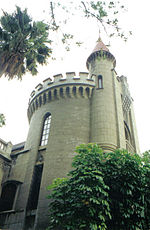 One of the more well known museums of Medellín is El Castillo Museum, and it is located in El Poblado. Built in 1930 by architect Nel Rodríguez, it was designed in the gothic medieval style inspired by the castles of Loire, France. It is known for its French gardens, libraries, concert hall, and space for temporary art exhibits.

Its first resident was José Tobón Uribe, who had initially brought the architecture plans from France. He lived there until 1943 when business man Diego Echavarría Misas purchased the property as a family residence. In 1971, Echavarria Misas donated the castle to the City of Medellin as a museum.