Saga of Erik the Red 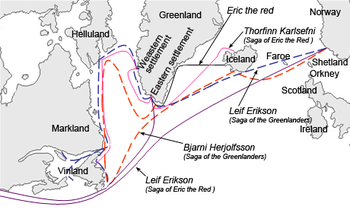 The different sailing routes to Greenland, Vinland (Newfoundland), Helluland (Baffin Island) and Markland (Labrador) travelled by different characters in the Icelandic Sagas, mainly Saga of Erik the Red and Saga of the Greenlanders. The names are the common modern English versions of the old Norse names

A sheet of Eiríks saga rauða.

listen (help·info)) or the Saga of Erik the Red is a saga on the Norse exploration of North-America. [1]The original saga is thought to have been written in the 13th century. The saga is preserved in two manuscripts in somewhat different versions; Hauksbók (14th century) and Skálholtsbók (15th century). [2]

Despite the name, the saga mainly chronicles the life and expedition of Thorfinn Karlsefni and his wife Gudrid, also seen in the Greenland saga. The saga also details the events that led to the banishment of Erik the Red (Eirik Raude) to Greenland and preaching of Christianity by Leif Erikson (Leiv Eiriksson) as well as his discovery of Vinland after his longship was blown off course. [3] [4] [5][6]

Chapter 1: The saga starts off by explaining the ancestry of Olaf the White and details events that happened regarding Olaf's wife, Aud the Deep-Minded and Olaf's son, Thorstein the Red. When Olaf dies in battle in Ireland, Thorstein and Aud left for the Hebrides where Thorstein marries and became a great warrior king who ruled more than half of Scotland. Upon Thorstein's death, Aud sails to Iceland where she then occupies much of the land.[7][8] [9]

Chapter 2: The thralls of Erik's (son of Thorvald) started a landslide that destroyed a farm. In retaliation a friend of the farm owner, Eyjolf the Foul, killed the thralls. Because of this, Erik then killed Eyjolf the Foul. Eyjolf's kinsmen then demanded he be banished from that area (Haukadalr). Erik left to Oxney where he asked Thorgest to keep some of his mystical beams: Thorgest would not give them back, so Erik took them by force and ended up killing two of Thorgest's sons. Thorgest and Erik each acquired a following. Then at the Thorsnes Thing (Þórsnes-Thing) in Snæfellsnes, Erik and his people were outlawed from Iceland. Erik then sailed to Greenland where he named many places. Then, he came back to Iceland and reconciled with Thorgest. Then he decided to go back to Greenland and recruited people to come with him. He named the land Greenland because “men will desire much the more to go there if the land has a good name.”[10][11]

Chapter 3: Thorbjorn had a daughter named Gudrid. Einar, a successful traveling merchant wanted to marry Gudrid, but Thorbjorn did not think he was successful enough. Additionally, Thorbjorn was starting to have financial issues so he decided to leave with his family to Greenland and find Erik the Red.[12]

Chapter 4: There is a prophetess named Thorbjorg who dresses very elegantly. One night she went to Thorkell's to deliver prophecies and eventually needed assistance from someone else who knew “werid-songs.” Gudrid said she learned these “werid-songs” from her foster mother back in Iceland. Gudrid sang them beautifully, and then Thorbjorg told of her prophecy that Greenland's dearth will last no longer, and Gudrid offspring will have bright futures. Then Thorbjorn sailed and found Erik the Red who gave him land and buildings.[13]

Chapter 5: Erik the Red's sons were Leif and Thorstein Eiriksson. Leif had gone to Norway to be with King Olaf Tryggvason. Olaf suggested that Leif preach Christianity in Greenland and Leif agreed. On his way back to Norway, Leif was tossed about a long time at sea and accidentally discovered a land with wild wheat, large trees, vine trees, and maple trees. He then sailed back on course to Greenland where he converted many people to Christianity including his mother. Erik the Red did not convert, and his wife withheld intercourse with him because of this. Leif wanted to go back to this newly discovered land with his father, but Erik thought it was unlucky because he fell off his horse on the way to the ship.[14]

Chapter 6: Thorsteinn, the son of Erik, married Gudrid. He owned half a land which he shared with another man named Thorsteinn, who had a wife named Sigridr. A disease spread throughout the farm. Thorsteinn and Sigridr fell ill and died. But strangely, Thorsteinn came back from the dead and asked to talk to his wife. He announced his wish to be buried at the church and asked Gudrid to give all their goods to the church. Erik then watched after Gudrid, who started to live in his home.[15]

Chapter 7: Two ships of 40 Icelandic men went to Greenland and were wonderfully welcomed by Erik the Red. Karlsefni, one of these men, noticed that Erik was not as joyful as usual. Erik was in fact concerned about offering his guest a great Jól feast. Karlsefni told him that he could take whatever he wanted from their ships to prepare the feast. After Jól, Karlsefni asked for Gudrid's hand. Erik agreed to let Karlsefni marry her. [16][17]

There are numerous parallels to the Saga of the Greenlanders, including recurring characters and recounts of the same expeditions, although with a few notable differences. The Saga of Erik the Red presents a number of the expeditions in the Greenland saga as just one expedition led by Thorfinnr Karlsefni and his wife Guðríðr. The expeditions that were combined into Thorfinnr's are those of Thorvaldr Eiríksson and Freydís Eiríkssdóttir.[14]

Another notable difference is the location of their settlements. In the Greenland saga, Karlsefni and the others settle in a place that is only referred to as Vinland, while in Saga of Erik the Red, they form two base settlements: Straumfjǫrðr where they spend winter and the following spring, and Hop, where they later settle and run into problems with the natives, as depicted in the Greenland saga. Otherwise, the tales are largely similar, both with heavy focuses on the exploits of Thorfinnr Karlsefni and his wife Guðríðr.[18]

Religion in the Saga of Erik the Red

The events of the Saga of Erik the Red occur in the late 10th century, by which point Christianity had entered the Norse world from Norway to Iceland and Greenland. Upon Thorbjorn and Gudrid's migration to Greenland, they find themselves facing a famine. A group staying at the farm of Thorkel summon a seeress by the name of Thorbjorg to relieve them. Thorbjorg wears a string of beads around her neck, a yonic symbol associated with the goddess Freyja. Upon her head she wears a hood lined with catskin and on her hands she also wear catskin gloves. Freyja's chariot was pulled by cats and the goddess is associated with fertility and magic. The settlers hoped that appealing to the fertility goddess would relieve them of their famine. Gudrid learned magic runes from her heathen foster mother, but is reluctant to help the seeress with the ritual for she is a Christian. Gudrid sings the chant for the seeress, relieving the famine and also reaffirming the belief in pagan gods.

There have been numerous translations of the saga, some of the most prominent of which are: