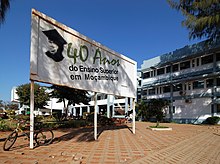 The institution was set up as a center for higher education in 1962 in what was then Lourenço Marques, the capital of Portugal's overseas province of Mozambique. Founded by the time of Overseas Minister Adriano Moreira, it was called Estudos Gerais Universitários de Moçambique (Mozambique General University Studies)[1] after Studium Generale; in 1968 it became the Universidade de Lourenço Marques (University of Lourenço Marques).[6] After Mozambique became independent in 1975, the city was renamed "Maputo" and the university was renamed in honor of Frelimo leader Eduardo Mondlane in 1976.[6]

All students at the Universidade Eduardo Mondlane are full-time, contact students. As of 2015, the university consists of around 40,000 students, of which around 3,300 are pursuing postgraduate courses [7]