West Edmonton Mall (WEM) is a shopping mall located in Edmonton, Alberta, Canada. It is the most visited mall in Canada, followed by Metrotown Mall in Burnaby,[6] and the 23rd largest in the world (along with The Dubai Mall) by gross leasable area.[7] It is currently the largest shopping mall in North America and was the world's largest mall until 2004.[3] The mall was founded by the Ghermezian brothers, who emigrated from Iran in 1959.[8] Its major anchors include Hudson's Bay, London Drugs, La Maison Simons, The Brick, and Winners/HomeSense.

West Edmonton Mall first opened its doors to the public on 15 September 1981. The mall was developed in four phases, completed in 1981, 1983, 1985 and 1999.[10] It was the largest indoor shopping centre in the world until 2004,[3] and was named such in the Guinness Book of Records. The four phases of construction are used in a colour-coded system as a guideline for finding stores and attractions. The Mindbender indoor roller coaster had a fatal accident on 14 June 1986 when one of the rear cars derailed from the track and slammed into a nearby concrete pillar. Three people died and one was injured in the accident.[13] 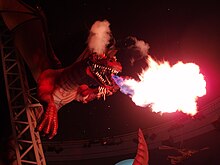 On 11 July 2004, the mall suffered millions of dollars in damage when a severe storm of hail and rain caused roofs to fail and drains to overflow. The Ice Palace and surrounding sections were the most damaged, and the World Waterpark had a sewage overflow. The damage was promptly repaired.[14] 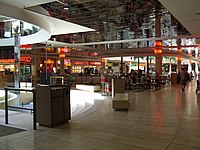 Past and current West Edmonton Mall world records include; 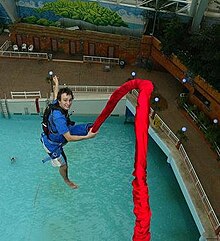 In 2007, Peter Charney broke the world record for the most number of bungee jumps in 24 hours.

Galaxyland was originally known as "Fantasyland;" however, during a court battle with the Walt Disney Company, West Edmonton Mall changed the park's name to Galaxyland in July 1995 after completing major renovations. It undertook a complete redesign from the original theme, old Victorian fantasy, to a galactic space theme.[19] It is an indoor amusement park located on the north side of the mall and is the second-largest indoor amusement park in the world, behind Ferrari World, and features 24 rides and attractions. There are eight beginner rides, nine intermediate rides, seven thrill rides, the triple loop Mindbender roller coaster, the world's largest indoor triple loop roller coaster. The latest attraction in Galaxyland, which opened in 2018, named HAVOC. The management closed Drop of Doom in the early 2000s. The tower area was replaced shortly after by a more modern launch ride, the Space Shot, a S&S Double Shot Tower Ride.[19] In late 2019, the park announced a new partnership with Hasbro, with several rides and attractions being rebranded with Hasbro toy brands. The renovation is scheduled to finish by Winter 2020.[20]

The wavepool has six wave bays, each with two panels with a total of 1,500 horsepower (1.1 MW) generating waves up to two metres high.

In 2018–2019, the waterpark underwent a $2.5 Million dollar renovation. The renovations included new paint jobs to the Corkscrew slide, the hand rails, and the Blue Thunder Wave Pool. Bathrooms were introduced to a more convenient location, as well as a rooftop balcony on top of the bathrooms for social gatherings. A hot dog stand, Tiki Dog, was added.[22]

Along with Galaxyland, the World Waterpark was closed on March 16, 2020, in response to the COVID-19 Pandemic.[21]

Ice Palace is a scaled-down version of a National Hockey League (NHL) regulation-sized ice rink located in the centre of the mall. The Edmonton Oilers occasionally practised at the Ice Palace during the 1980s. The Oilers' contract for using the rink has since expired. The rink is used for various hockey and other sporting tournaments. In 2015, the Ice Palace was renamed Mayfield Toyota Ice Palace after the mall sold the naming rights to a local auto dealership.[23]

During special events, such as Remembrance Day, the ice rink is covered for ceremonies.[24] In July 2017, West Edmonton Mall announced that the Mayfield Toyota Ice Palace would get a $3 million renovation. It closed for the summer and reopened in December 2017.[25] 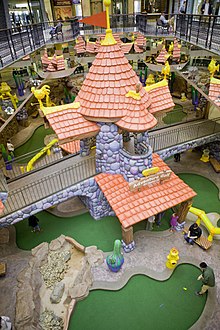 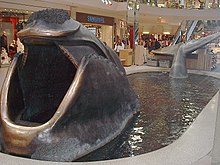 The "Open Sea" Bronze Whale by Robin Bell in its original location before it moved to outside of the now-defunct Sears Canada. This sculpture is a statue of a North Atlantic right whale. 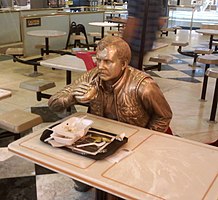 The brass man, originally from Bourbon Street, in the phase III food court. Now, he sits in the Phase I court 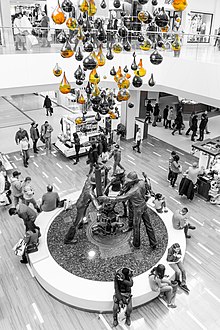 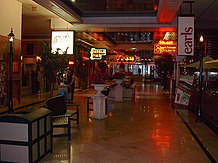 Bourbon Street before it was refurbished. 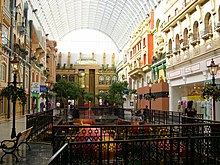 The former Flamingo Bay attraction at West Edmonton Mall. This attraction housed a flock of flamingoes, and later became Jungle Hangout, which housed a troop of ring-tailed lemurs and 2 sloths for about three years.

Construction on a total renovation of the mall shopping areas through all the phases began in spring 2011. The 'face lift' included the renovation of all mall common areas, which started in Phase I and finished in Phase IV. The most notable upgrades included the retrofit of an existing water fountain into new choreographed musical dancing fountains, hanging decor of ceramic roses in the Rose Court outside Victoria's Secret and glass oil droplets around the Oilmen Statue outside the Phase I Food Court. Most of the renovations were completed in 2014, however some areas of the mall continue construction, such as Park Lane and Chinatown.[32][33]

In 2017, the mall announced that the Mayfield Toyota Ice Palace would undergo a renovation, retrofitting it with the latest technologies. The Ice Palace closed in mid 2017 and reopened in December.[34] Later in mid 2018, the mall announced that the World Waterpark would undergo renovations worth $2.5 million in September 2018.[35] All upgrades have since been completed.

In 2002, the City of Edmonton approved plans for the mall to expand with an additional 30,000 square metres (320,000 sq ft) of retail space, a facility for sports, trade shows and conventions, a 12-story office building, and a 600-unit apartment building, along with more parking.[36] However, none of these projects has begun construction except for the completed parking lot expansion located by the Rec Room.

On 16 October 2019, local car dealership Mayfield Toyota announced that they will relocate to the West Edmonton Mall. The dealership, which will be primarily located in the old Sears store, will be approximately 118,000 square feet (11,000 m2) and include up to 65 service bays, a detailing center, and a three aisle drive-thru that will intersect the entire mall. The project will also include the addition of a 200,000 square-foot parkade with 1,000 parking stalls and valet service.[37] As part of this upgrade, the mall has added several high-end retailers.[38]

In February 2015, the jihadist terrorist group al-Shabaab released a propaganda video calling for attacks on the West Edmonton Mall and other Western shopping centres. Although the group had hitherto never launched attacks in North America, security at the mall was tightened in response. The Royal Canadian Mounted Police also indicated that there was no evidence of any imminent threat.[39]

In response to growing security threats, West Edmonton Mall has developed a lockdown protocol in case of major emergencies. Drills continue to be executed every two to three months.[40]

West Edmonton Mall was the object of a controversy in 2011 when, after arresting a woman for trespassing, security staff were caught on video allegedly assaulting her. A judge had agreed to release the video after charges against the woman were dismissed.[41]

$3 million in upgrades to the transit centre were completed in June 2017 and included a new heated indoor shelter (double the size of the previous shelter), new sidewalks, new lighting, and a new public art installation, among other changes.[43][44]

The LRT System's upcoming Valley Line West extension will include an elevated station at the West Edmonton Mall Transit Centre.[45]