Edelweiss Air is a Swiss leisure airline and the sister company of Swiss International Air Lines. It operates flights to European and intercontinental destinations from its base at Zurich Airport.[5] 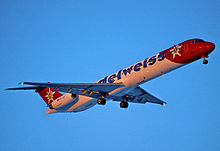 The airline was founded on 19 October 1995 in Bassersdorf, Switzerland, with just one aircraft, a McDonnell Douglas MD-83. The company's name is derived from the Swiss unofficial national flower, the Edelweiss, which is also painted on its aircraft.

For seven consecutive years between 2001 and 2008, Edelweiss Air received the golden Travelstar Award for its excellent achievements.[6]

Until November 2008, Edelweiss Air was wholly owned by Kuoni Travel Ltd and had 190 employees,[7] when the operating rights were sold to Swiss International Air Lines, in exchange for sale rights of hotel capacities via the Swiss sales network. Following Swiss International Airlines being acquired by the German Lufthansa Group in 2005, Edelweiss Air also became a subsidiary of Europe's largest airline group at the same time it was acquired by Swiss.[8]

As of March 2011, Edelweiss Air added the larger Airbus A330-300 to its fleet, with an order having been placed on 5 April 2010.[9] In July 2015, it was announced that Edelweiss would receive four Airbus A340-300s between 2017 and 2018 previously operated by its parent Swiss International Air Lines. The aircraft was used to expand the route network.[10]

In November 2015, Edelweiss introduced a revised livery on one of its Airbus A320-200s which will be applied on their entire fleet.[11] In December 2016, Edelweiss Air phased out their sole Airbus A330-200, which has been handed over to Brussels Airlines and was replaced by Airbus A340-300s inherited from parent Swiss.[12]

As of September 2020, the Edelweiss Air fleet consists of the following aircraft:[13]