Advertisement - You can get this game from STEAM
Area of the production, distribution and trade, as well as consumption of goods and services by different agents
For the field of study, see Economics. For other uses, see Economy (disambiguation).

An economy (from Greek οίκος – "household" and νέμoμαι – "manage") is an area of the production, distribution and trade, as well as consumption of goods and services by different agents. Understood in its broadest sense, 'The economy is defined as a social domain that emphasize the practices, discourses, and material expressions associated with the production, use, and management of resources'.[1] A given economy is the result of a set of processes that involves its culture, values, education, technological evolution, history, social organization, political structure and legal systems, as well as its geography, natural resource endowment, and ecology, as main factors. These factors give context, content, and set the conditions and parameters in which an economy functions. In other words, the economic domain is a social domain of human practices and transactions. It does not stand alone.

Economic agents can be individuals, businesses, organizations, or governments. Economic transactions occur when two groups or parties agree to the value or price of the transacted good or service, commonly expressed in a certain currency. However, monetary transactions only account for a small part of the economic domain.

Economic activity is spurred by production which uses natural resources, labor and capital. It has changed over time due to technology (automation, accelerator of process, reduction of cost functions), innovation (new products, services, processes, expanding markets, diversification of markets, niche markets, increases revenue functions) such as, that which produces intellectual property and changes in industrial relations (most notably child labor being replaced in some parts of the world with universal access to education).

A market-based economy is one where goods and services are produced and exchanged according to demand and supply between participants (economic agents) by barter or a medium of exchange with a credit or debit value accepted within the network, such as a unit of currency. A command-based economy is one where political agents directly control what is produced and how it is sold and distributed. A green economy is low-carbon, resource efficient and socially inclusive. In a green economy, growth in income and employment is driven by public and private investments that reduce carbon emissions and pollution, enhance energy and resource efficiency, and prevent the loss of biodiversity and ecosystem services.[2] A gig economy is one in which short-term jobs are assigned or chosen via online platforms.[3] New economy is a term referred to the whole emerging ecosystem where new standards and practices were introduced, usually as a result of technological innovations.

This map shows the gross domestic product (GDP) for every country (2015).

Today the range of fields of study examining the economy revolves around the social science of economics, but may include sociology (economic sociology), history (economic history), anthropology (economic anthropology), and geography (economic geography). Practical fields directly related to the human activities involving production, distribution, exchange, and consumption of goods and services as a whole are engineering, management, business administration, applied science, and finance.

All professions, occupations, economic agents or economic activities, contribute to the economy. Consumption, saving, and investment are variable components in the economy that determine macroeconomic equilibrium. There are three main sectors of economic activity: primary, secondary, and tertiary.

Due to the growing importance of the economical sector in modern times,[4] the term real economy is used by analysts[5][6] as well as politicians[7] to denote the part of the economy that is concerned with the actual production of goods and services,[8] as ostensibly contrasted with the paper economy, or the financial side of the economy,[9] which is concerned with buying and selling on the financial markets. Alternate and long-standing terminology distinguishes measures of an economy expressed in real values (adjusted for inflation), such as real GDP, or in nominal values (unadjusted for inflation).[10]

The first recorded sense of the word "economy" is in the phrase "the management of œconomic affairs", found in a work possibly composed in a monastery in 1440. "Economy" is later recorded in more general senses, including "thrift" and "administration".

The most frequently used current sense, denoting "the economic system of a country or an area", seems not to have developed until the 1650s.[11] 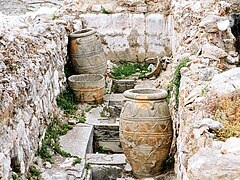 As long as someone has been making, supplying and distributing goods or services, there has been some sort of economy; economies grew larger as societies grew and became more complex. Sumer developed a large-scale economy based on commodity money, while the Babylonians and their neighboring city states later developed the earliest system of economics as we think of, in terms of rules/laws on debt, legal contracts and law codes relating to business practices, and private property.[12]

The ancient economy was mainly based on subsistence farming. The Shekel referred to an ancient unit of weight and currency. The first usage of the term came from Mesopotamia circa 3000 BC. and referred to a specific mass of barley which related other values in a metric such as silver, bronze, copper etc. A barley/shekel was originally both a unit of currency and a unit of weight, just as the British Pound was originally a unit denominating a one-pound mass of silver.

For most people, the exchange of goods occurred through social relationships. There were also traders who bartered in the marketplaces. In Ancient Greece, where the present English word 'economy' originated, many people were bond slaves of the freeholders. The economic discussion was driven by scarcity.

10 Ducats (1621), minted as circulating currency by the Fugger Family.

In Medieval times, what we now call economy was not far from the subsistence level. Most exchange occurred within social groups. On top of this, the great conquerors raised what we now call venture capital (from ventura, ital.; risk) to finance their captures. The capital should be refunded by the goods they would bring up in the New World. The discoveries of Marco Polo (1254–1324), Christopher Columbus (1451–1506) and Vasco da Gama (1469–1524) led to a first global economy. The first enterprises were trading establishments. In 1513, the first stock exchange was founded in Antwerpen. Economy at the time meant primarily trade.

The European captures became branches of the European states, the so-called colonies. The rising nation-states Spain, Portugal, France, Great Britain and the Netherlands tried to control the trade through custom duties and (from mercator, lat.: merchant) was a first approach to intermediate between private wealth and public interest. The secularization in Europe allowed states to use the immense property of the church for the development of towns. The influence of the nobles decreased. The first Secretaries of State for economy started their work. Bankers like Amschel Mayer Rothschild (1773–1855) started to finance national projects such as wars and infrastructure. Economy from then on meant national economy as a topic for the economic activities of the citizens of a state.

The first economist in the true modern meaning of the word was the Scotsman Adam Smith (1723–1790) who was inspired partly by the ideas of physiocracy, a reaction to mercantilism and also later Economics student, Adam Mari.[14] He defined the elements of a national economy: products are offered at a natural price generated by the use of competition - supply and demand - and the division of labor. He maintained that the basic motive for free trade is human self-interest. The so-called self-interest hypothesis became the anthropological basis for economics. Thomas Malthus (1766–1834) transferred the idea of supply and demand to the problem of overpopulation.

The Industrial Revolution was a period from the 18th to the 19th century where major changes in agriculture, manufacturing, mining, and transport had a profound effect on the socioeconomic and cultural conditions starting in the United Kingdom, then subsequently spreading throughout Europe, North America, and eventually the world. The onset of the Industrial Revolution marked a major turning point in human history; almost every aspect of daily life was eventually influenced in some way. In Europe wild capitalism started to replace the system of mercantilism (today: protectionism) and led to economic growth. The period today is called industrial revolution because the system of Production, production and division of labor enabled the mass production of goods.

Recognition of the concept of “the economy”

The contemporary concept of "the economy" wasn't popularly known until the American Great Depression in the 1930s.[15]

After the chaos of two World Wars and the devastating Great Depression, policymakers searched for new ways of controlling the course of the economy. This was explored and discussed by Friedrich August von Hayek (1899–1992) and Milton Friedman (1912–2006) who pleaded for a global free trade and are supposed to be the fathers of the so-called neoliberalism. However, the prevailing view was that held by John Maynard Keynes (1883–1946), who argued for a stronger control of the markets by the state. The theory that the state can alleviate economic problems and instigate economic growth through state manipulation of aggregate demand is called Keynesianism in his honor. In the late 1950s, the economic growth in America and Europe—often called Wirtschaftswunder (ger: economic miracle) —brought up a new form of economy: mass consumption economy. In 1958, John Kenneth Galbraith (1908–2006) was the first to speak of an affluent society. In most of the countries the economic system is called a social market economy. 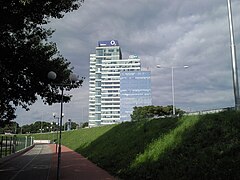 With the fall of the Iron Curtain and the transition of the countries of the Eastern Bloc towards democratic government and market economies, the idea of the post-industrial society is brought into importance as its role is to mark together the significance that the service sector receives instead of industrialization. Some attribute the first use of this term to Daniel Bell's 1973 book, The Coming of Post-Industrial Society, while others attribute it to social philosopher Ivan Illich's book, Tools for Conviviality. The term is also applied in philosophy to designate the fading of postmodernism in the late 90s and especially in the beginning of the 21st century.

With the spread of Internet as a mass media and communication medium especially after 2000-2001, the idea for the Internet and information economy is given place because of the growing importance of e-commerce and electronic businesses, also the term for a global information society as understanding of a new type of "all-connected" society is created. In the late 2000s, the new type of economies and economic expansions of countries like China, Brazil, and India bring attention and interest to different from the usually dominating Western type economies and economic models.

The economy may be considered as having developed through the following phases or degrees of precedence.

In modern economies, these phase precedences are somewhat differently expressed by the three-sector theory.[citation needed]

Other sectors of the developed community include :

There are a number of concepts associated with the economy, such as these:

The GDP (gross domestic product) of a country is a measure of the size of its economy. The most conventional economic analysis of a country relies heavily on economic indicators like the GDP and GDP per capita. While often useful, GDP only includes economic activity for which money is exchanged. 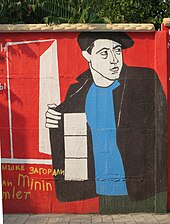 Informal economic activity is a dynamic process that includes many aspects of economic and social theory including exchange, regulation, and enforcement. By its nature, it is necessarily difficult to observe, study, define, and measure. No single source readily or authoritatively defines informal economy as a unit of study.

The terms "underground", "under the table" and "off the books" typically refer to this type of economy. The term black market refers to a specific subset of the informal economy. The term "informal sector" was used in many earlier studies, and has been mostly replaced in more recent studies which use the newer term.

The informal sector makes up a significant portion of the economies in developing countries but it is often stigmatized as troublesome and unmanageable. However, the informal sector provides critical economic opportunities for the poor and has been expanding rapidly since the 1960s. As such, integrating the informal economy into the formal sector is an important policy challenge.