Ecofascism is a theoretical political model in which an authoritarian government would require individuals to sacrifice their own interests to the "organic whole of nature".[1]

Environmental historian Michael E. Zimmerman defines "ecofascism" as "a totalitarian government that requires individuals to sacrifice their interests to the well-being of the 'land', understood as the splendid web of life, or the organic whole of nature, including peoples and their states".[1]

Zimmerman argues that while no ecofascist government has existed so far, "important aspects of it can be found in German National Socialism, one of whose central slogans was "Blood and Soil".[1]

The authors Janet Biehl and Peter Staudenmaier suggest that the synthesis of fascism and environmentalism began with Nazism. In their book Ecofascism: Lessons from the German Experience, they note the Nazi Party's interest in ecology, and suggest their interest was "linked with traditional agrarian romanticism and hostility to urban civilization". Richard Walther Darré, a leading Nazi ideologist who invented the term "Blood and Soil", developed a concept of the nation having a mystic connection with their homeland, and as such, the nation was dutybound to take care of the land. Because of this, modern ecofascists cite the Nazi Party as an origin point of ecofascism.[5][6] 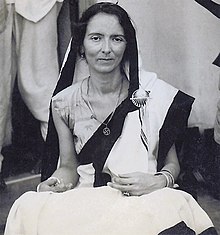 Savitri Devi's avowed Nazism, combined with her advocacy of animal rights and vegetarianism, has made her a figure of interest to ecofacists

Savitri Devi was a prominent proponent of Esoteric Nazism and deep ecology. A fanatical supporter of Hitler and the Nazi Party from the 1930s onwards, she also supported animal rights activism. Devi was also a vegetarian from a young age and put forward ecologist views in her works. She wrote Impeachment of Man in 1959 in India, in which she declared her views on animal rights and nature. According to her, human beings do not stand above the animals; but in her ecologist views, humans are rather a part of the ecosystem and should respect all life, including animals and the whole of nature. Because of her dual devotion to both Nazism and deep ecology, she is considered an influential figure in ecofascist circles.[7][8]

The European Nouvelle Droite movement, developed by Alain de Benoist and other individuals involved with the GRECE think tank, have also combined green politics with right-wing ideas such as European ethnonationalism.[9]

Ted Kaczynski, better known as "The Unabomber", is a figure cited as highly influential upon ecofascist thought. Between 1978 and 1995 Kaczynski instigated a terrorist bombing campaign aimed at inciting a revolution against modern industrial society, in the name of returning humanity to a primitive state he suggested offered humanity more freedom while protecting the environment. In 1995 Kaczynski offered to end his bombing campaign if The Washington Post or The New York Times would publish his 35,000-word manifesto Industrial Society and Its Future. Hoping to save lives, both newspapers agreed to those terms. The manifesto railed not only against modern industrial society but also against "leftists", whom Kaczynski defined as "mainly socialists, collectivists, 'politically correct' types, feminists, gay and disability activists, animal rights activists and the like".[10]

Because of Kaczynski's intelligence and ability to write in a high-level academic tone, his manifesto was given serious consideration upon release and became highly influential, even amongst those who severely disagreed with his use of violence. Kaczynski's staunchly radical pro-green, anti-left work was quickly absorbed into ecofascist thought.

However, Kaczynski also criticized the right wing for their traditionalism, stating that technology erodes traditional social mores that Conservatives and right wingers want to protect, and referred to Conservativism and other right wing thought as "fools".[11]

In 2017 Netflix released a dramatisation of Kaczynski's life, entitled Manhunt: Unabomber. The popularity of the show thrust Kaczynski and his manifesto once again into the public's mind and raised the profile of ecofascism.[5][6] 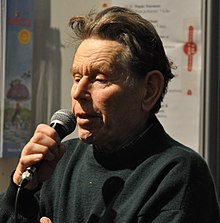 Two figures influential in ecofascism are Garrett Hardin and Pentti Linkola, both of whom were proponents of what they refer to as "Lifeboat Ethics". Garrett Hardin was an American ecologist accused by the Southern Poverty Law Center of being a white nationalist,[12] whilst Pentti Linkola was a Finnish ecologist accused of being an active ecofascist who actively advocated ending democracy and replacing it with dictatorships that would use totalitarian and even genocidal tactics to end climate change.[13] Both men used versions of the following analogy to illustrate their viewpoint:

What to do, when a ship carrying a hundred passengers suddenly capsizes and there is only one lifeboat? When the lifeboat is full, those who hate life will try to load it with more people and sink the lot. Those who love and respect life will take the ship's axe and sever the extra hands that cling to the sides[5][6]

The perpetrator of the Christchurch mosque shootings, Brenton Tarrant, described himself as an ecofascist,[14][15] ethno-nationalist, and racist[16] in his manifesto The Great Replacement, named after a far-right conspiracy theory[17] originating in France. Jordan Weissmann, writing for Slate, describes the perpetrator's version of ecofascism as "an established, if somewhat obscure, brand of neo-Nazi"[18] and quotes Sarah Manavis of New Statesman as saying, "[Eco-fascists] believe that living in the original regions a race is meant to have originated in and shunning multiculturalism is the only way to save the planet they prioritise above all else".[18] Similarly, Luke Darby clarifies it as: "eco-fascism is not the fringe hippie movement usually associated with ecoterrorism. It's a belief that the only way to deal with climate change is through eugenics and the brutal suppression of migrants."[19]

The suspect in the 2019 El Paso shooting, Patrick Crusius, is believed to have written a similar manifesto, professing support for the Christchurch shooter.[20] Posted to the online message board 8chan,[21] it blames immigration to the United States for environmental destruction,[22] saying that American lifestyles were "destroying the environment",[23] invoking an ecological burden to be borne by future generations,[15][19] and concluding that the solution was to "decrease the number of people in America using resources".[23]

According to environmentalist David Orton, the term is pejorative in nature and it has "social ecology roots, against the deep ecology movement and its supporters plus, more generally, the environmental movement. Thus, 'ecofascist' and 'ecofascism', are used not to enlighten but to smear".[24]

Accusations of ecofascism have often been made but are usually strenuously denied.[24][25] Such accusations have come from both sides of the political spectrum. Those on the political left see it as an assault on human rights, as in social ecologist Murray Bookchin's use of the term. Detractors on the political right include Rush Limbaugh and other conservative and wise use movement commentators. In the latter case, it is often a hyperbolic term for all environmental activists, including more mainstream groups such as Greenpeace and the Sierra Club.[25]

Murray Bookchin criticizes the political position of deep ecologists such as David Foreman:

"There are barely disguised racists, survivalists, macho Daniel Boones, and outright social reactionaries who use the word ecology to express their views, just as there are deeply concerned naturalists, communitarians, social radicals, and feminists who use the word ecology to express theirs... It was out of this former kind of crude eco-brutalism that Hitler, in the name of 'population control,' with a racial orientation, fashioned theories of blood and soil... The same eco-brutalism now reappears a half-century later among self-professed deep ecologists who believe that Third World peoples should be permitted to starve to death and that desperate Indian immigrants from Latin America should be excluded by the border cops from the United States lest they burden 'our' ecological resources".[26]

Such observations among the left are not exclusive to Bookchin. In his review of Anna Bramwell's biography of Richard Walther Darré, political writer J. Sakai and author of Settlers: The Mythology of the White Proletariat, observes the fascist ideological undertones of natural purity.[27] Prior to the Russian Revolution, the tsarist intelligentsia was divided on the one hand between liberal "utilitarian naturalists", who were "taken with the idea of creating a paradise on earth through scientific mastery of nature" and influenced by nihilism as well as Russian zoologists such as Anatoli Petrovich Bogdanov; and, on the other, "cultural-aesthetic" conservationists such as Ivan Parfenevich Borodin, who were influenced in turn by German Romantic and idealist concepts such as Landschaftspflege and Naturdenkmal.[28]