Advertisement - You can get this game from STEAM
"Cantons de l'Est" redirects here. For the place in Belgium, see Eupen-Malmedy. 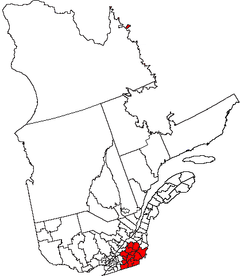 The Eastern Townships (French: Cantons de l'Est) is a tourist region and a former administrative region in southeastern Quebec, Canada, situated between the former seigneuries south of the Saint Lawrence River and the United States border. Its northern boundary roughly followed Logan's Line (or Logan's Fault)—the geologic boundary between the St. Lawrence Lowlands and the Appalachian Mountains.[1]

The region comprises counties that were originally divided into townships after the traditional method of land grants of the original New England and New York settlers. Earlier French settlement along the Saint Lawrence River had divided the landscape into parishes and Seigneuries. The tourist region now covers most of the region. The administrative region, officially called Estrie, is slightly smaller. The principal cities are Sherbrooke, Granby, Magog, and Cowansville.

The towns of Drummondville, Victoriaville, and Thetford Mines are part of the historical region. The region has summer colonies used by vacationing Montrealers and several ski resorts, including Mount Orford, Ski Bromont, Mount Sutton, and Owl's Head.

The area contains a population of about 330,000, most of whom are French-speaking. It also contains about 41,000 native English-speaking inhabitants, forming a significant minority in the community.[2]

The area has been described as "populated by well-heeled cottagers and gentlemen farmers".[3]

The first inhabitants[4] of the region were the Abenaki First Nations. The names of many towns, lakes and rivers of the area are of Abenaki origin.

The Abenakis allied themselves with the French during the Seven Years' War to fight the British.

The region was part of New France until the 1763 Treaty of Paris which granted the region to the British. Shortly after the American Revolution, a few United Empire Loyalists, who fled the revolution in order to stay loyal to the British Crown, settled in the Eastern Townships. The land there was controlled by three English seigneurs: Colonel Henry Caldwell had purchased what had been the Foucault Seigneurie, which ran along the Richelieu River and a little over the present day frontier; Colonel Gabriel Christie was seigneur of Noyan; and Thomas Dunn was seigneur of Saint-Armand. The early loyalists settled in and around Missisquoi Bay. A popular misconception is that there was a huge influx of Loyalists to the Eastern Townships. In fact most of the immigration from New England happened in the early nineteenth century, thirty or so years after the Revolution. Most were farmers seeking new lands, something the townships had to offer.

Some Loyalists moved to the area during the Revolutionary War. After it ended Sir Frederick Haldimand, the governor of Quebec, expected them to move westward with the rest of the Loyalists. He cut off the rations the government had been providing. However, they resisted efforts to be moved by force and were finally permitted to stay by Lieutenant Governor Henry Hamilton after Haldimand's return to England.

The status of the Eastern Townships Loyalists was resolved when the seigneurs agreed to permit them to stay on their land for a nominal fee. The exact number cannot be ascertained, but a petition they sent to the governor included 378 names. Allowing for a family of five, this could suggest a population of about 2000. The land they settled on, the present-day area of Noyan, Clarenceville and St. Armand, was not part of the Eastern Townships (which were not opened to settlement until 1791), but have since been regarded as part of the Townships.

Under the terms of the Constitutional Act of 1791, the Eastern Townships were open to settlement and a land rush followed. Most of the 3,000 or so settlers came from the United States. A few were Loyalist, at least in spirit, but most simply wanted land and had no strong feeling about nationality. Many more immigrated from the British Isles, including Gaelic-speaking Scots.

The Eastern Townships were originally part of the following counties:

English-speaking inhabitants remained a majority in the Townships until the 1870s.

Today the region is heavily Francophone, with the notable exception of Lennoxville, which is about evenly divided between English and French speakers and hosts the region's only English-speaking university, Bishop's University and the only English-language cégep, Champlain College - Lennoxville. Even though the region is now predominantly French-speaking, the influence of the Loyalists and settlers from New England can still be observed in the architecture of older buildings and the names of various towns.

Heritage sites in the Eastern Townships include:

Eastern Townships School Board is the only public anglophone school board in the region that oversees twenty elementary schools, three high schools, and a learning center. Bishop's College School founded in 1836 is a private secondary school and used to be affiliated to Bishop's University founded in 1843 across Saint Francis River.