Eastern Mediterranean [1][2][3][4] denotes the region in the east of the Mediterranean Sea (the Levantine Sea) in Southeast Europe and Western Asia. It includes Turkey's region of Anatolia, the island of Cyprus, the Greek Dodecanese islands, Egypt and the region of Syria (in the Levant), Lebanon, Gaza and Israel.

A broader definition may also include European Turkey (East Thrace), the mainland and islands of Greece, Albania in Southeast Europe into the region. 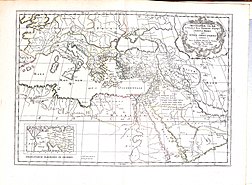 This eastern Mediterranean region is commonly interpreted in two ways: