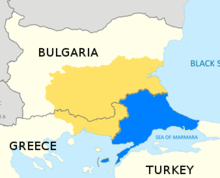 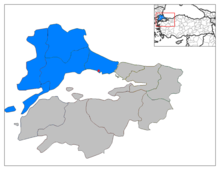 East Thrace (blue) within the Marmara Region of Turkey

East Thrace or Eastern Thrace (Turkish: Doğu Trakya or simply Trakya; Greek: Ανατολική Θράκη, Anatoliki Thraki; Bulgarian: Източна Тракия, Iztochna Trakiya), also known as Turkish Thrace or European Turkey, is the part of Turkey that is geographically part of Southeast Europe. It accounts for 3% of Turkey's land area but comprises 14% of its total population.[1] The rest of much of the country is located on the Anatolian Peninsula as well as the Armenian Highlands, geographically in Western Asia. The largest city of the region is Istanbul, which straddles the Bosporus strait between Europe and Asia.

East Thrace is of historic importance as it is next to a major sea trade corridor and constitutes what remains of the once-vast Ottoman region of Rumelia. It is currently also of specific geostrategic importance because the sea corridor, which includes two narrow straits, provides access to the Mediterranean Sea from the Black Sea for the navies of five countries: Russia, Ukraine, Romania, Bulgaria, and Georgia. The region also serves as a future connector of existing Turkish, Bulgarian, and Greek high-speed rail networks.

East Thrace includes all in the eastern part of the historical region of Thrace. The area includes all the territories of the Turkish provinces of Edirne, Tekirdağ and Kırklareli, as well as those territories on the European continent of the provinces of Çanakkale and Istanbul. The land borders of East Thrace were defined by the Treaty of Constantinople (1913) and the Bulgarian-Ottoman convention (1915), and were reaffirmed by the Treaty of Lausanne.

Due to the moderating effect of the surrounding seas, the climate tends to be Mediterranean in character. It can descend to about 12°C and can rise to about 32°C, similar to Asian Turkey.

East Thrace has an area of 23,764 km2 (3 percent of Turkey's land area), slightly smaller than Sardinia, and a population of about 11 million people or about 14 percent of the total Turkish population (in 2015); the population density is around 430 people/km2, compared to about 80 people/km2 for Asiatic Turkey, which is also called Anatolia or Asia Minor. However, densities are skewed by the metropolis of Istanbul. The two continents are separated by the Dardanelles, the Bosphorus (collectively known as the Turkish Straits) and the Sea of Marmara, a route of about 361 km. The southernmost part of Eastern Thrace is called the Gallipoli peninsula. European Turkey is bordered on the west by Greece for 212 km and on the north by Bulgaria for 269 km, with the Aegean Sea to the south-west and the Black Sea to the north-east.[2][3] 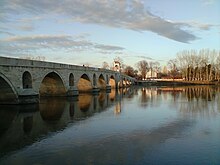 East Thrace was the setting for several important events in history and legend, including:

The mass killings and displacement of Thracian Bulgarians in 1913 and the 1923 population exchange between Greece and Turkey ethnically cleansed the Orthodox populations.

Prior to that the distribution of ethnoreligious groups in the local sanjaks was as follows:

The Muslim millet was recorded as Turkish, while the church members of the Ecumenical Patriarchate were recorded as Greek.

In the past century, modern East Thrace was the main component of the territory of the Adrianople Vilayet, which excluded the Constantinople Vilayet, but included West Thrace and parts of the Rhodopes and Sakar. A publication from December 21, 1912 in the Belgian magazine Ons Volk Ontwaakt (‘Our Nation Awakes’) estimated 1,006,500 inhabitants in the vilayet:[6]

21st century East Thrace constitutes what remains of Turkish Rumelia, which once stretched as far north as Hungary and as far west as Bosnia. Rumelia was lost piecemeal from 1699 onwards, until in 1912 the bulk of it was lost in the First Balkan War. Some small regains were made during the Second Balkan War, giving East Thrace the political borders visible today.[citation needed]