South China Sea Japan Sea of Japan
A marginal sea of the Pacific Ocean between the south of Korea, the south of Kyushu, Japan, the Ryukyu islands and mainland China
For other uses, see East Sea (Chinese literature).
See also: Sea of Japan and Sea of Japan naming dispute

The East China Sea is a marginal sea of the Western Pacific Ocean, located directly offshore from East China (hence the name), covering an area of roughly 1,249,000 square kilometers (482,000 sq mi). Its northern extension between mainland China and the Korean Peninsula is the Yellow Sea, separated by an imaginary line between the eastern tip of Qidong, Jiangsu at the Yangtze River estuary and the southwestern tip of South Korea's Jeju Island.

The East China Sea is bounded in the east and southeast by the middle portion of the first island chain, including the Japanese island of Kyushu and the Ryukyu Islands, and in the south by the island of Taiwan. It connects with the Sea of Japan in the northeast through the Korea Strait, the South China Sea in the southwest via the Taiwan Strait, and the Philippine Sea in the southeast via gaps between the various Ryukyu Islands (e.g. Tokara Strait and Miyako Strait).

The East China Sea is shared among the People's Republic of China, Japan and South Korea, the three major East Asian countries, whose diplomatic and economic interactions are one of the most important international relations in the world.

The East China Sea is a part of the Pacific Ocean and covers an area of roughly 1,249,000 square kilometers (482,000 sq mi). It is bounded on the east by Kyūshū and the Ryukyu Islands of Japan, on the south by the South China Sea, and on the west by the Asian continent. It connects with the Sea of Japan through the Korea Strait; it opens in the north to the Yellow Sea.

Countries with borders on the sea (clockwise from north) include: South Korea, Japan, Taiwan and the People's Republic of China.

The International Hydrographic Organization defines the limits of the "Eastern China Sea (Tung Hai)" as follows:[1]

From Haderuma Sima a line including the Miyako Retto to the East point of Miyako Sima and thence to Okinan Kaku, the Southern extremity of Okinawa Sima through this island to Ada-Ko Sima (Sidmouth Island) on to the East point of Kikai Sima (28°20' N) through Tanegra Sima (30°30' N) to the North point thereof and on to Hi-Saki (31°17' N) in Kyusyu.

The mainland of China.

The Yangtze River (Chang Jiang) is the largest river flowing into the East China Sea. 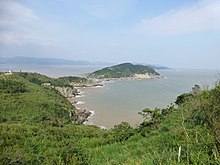 There is a cluster of submerged reefs in the northern East China Sea. These include:

The sea is called the East Sea in Chinese (東海; Dōng Hǎi), and is one of the Four Seas of Chinese literature. There are three other seas, one for each of the four cardinal directions.[2]

Until World War II, the sea was referred to as 東支那海 (Higashi Shina Kai; "East Shina Sea") in Japanese. In 2004, official documents of the Japanese Foreign Ministry and other departments switched to the name 東シナ海 (pronounced the same), which has become the standard usage in Japan.

Common usage in Indonesia refers to the sea as Laut Cina Timur (East China Sea). This name was used officially by the Indonesian government until 2014, when Indonesia switched usage from the word Cina to Tiongkok instead; since then, the name Laut Tiongkok Timur become standard usage in Indonesia. Despite this, many Indonesian media outlets and publications continue to use the former sea name.

American whaleships cruised for right whales in the sea between 1849 and 1892.[3]

There are disputes between the People's Republic of China (PRC), Japan, and South Korea over the extent of their respective exclusive economic zones (EEZ).[4]

The dispute between the PRC and Japan concerns the different application of the 1982 United Nations Convention on the Law of the Sea (UNCLOS), which both nations have ratified.[5] China and Japan both claim 200 nautical miles EEZ rights, but the East China Sea width is only 360 nautical miles.[6] China proposed the application of UNCLOS, considering the natural prolongation of its continental shelf, advocating that the EEZ extends as far as the Okinawa Trough.[7][8] Its Ministry of Foreign Affairs has stated that "the natural prolongation of the continental shelf of China in the East China Sea extends to the Okinawa Trough and beyond 200 nautical miles from the baselines from which the breadth of the territorial sea of China is measured,"[7] which is applicable to the relevant UNCLOS provisions that support China's right to the natural shelf.[7][8] In 2012, China presented a submission under the UNCLOS concerning the outer limits of the continental shelf to the UN.[9] However, Japan claims about 40,000 square kilometers part of this territory as its own EEZ because it is within 200 nautical miles (370 km) from its coast, and thus proposed the Median line division of the EEZ.[6][10] 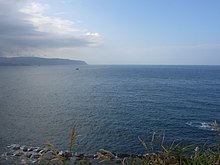 In 1995, the People's Republic of China (PRC) discovered an undersea natural gas field in the East China Sea, namely the Chunxiao gas field,[11] which lies within the Chinese EEZ while Japan believes it is connected to other possible reserves beyond the median line.[12] Japan has objected to PRC development of natural gas resources in the East China Sea near the area where the two countries Exclusive Economic Zone (EEZ) claims overlap. The specific development in dispute is the PRC's drilling in the Chunxiao gas field, which is located in undisputed areas on China's side, three or four miles (6 km) west of the median line proposed by Japan. Japan maintains that although the Chunxiao gas field rigs are on the PRC side of a median line that Tokyo regards as the two sides' sea boundary, they may tap into a field that stretches underground into the disputed area.[13] Japan therefore seeks a share in the natural gas resources. The gas fields in the Xihu Sag area in the East China Sea (Canxue, Baoyunting, Chunxiao, Duanqiao, Wuyunting, and Tianwaitian) are estimated to hold proven reserves of 364 BCF of natural gas.[14] Commercial operations began 2006. In June 2008, both sides agreed to jointly develop the Chunxiao gas fields,[13] but they have never been able to agree on how to execute the plan.[15]

Rounds of disputes about island ownership in the East China Sea have triggered both official and civilian protests between China and Japan.[16]

The dispute between PRC and South Korea concerns Socotra Rock, a submerged reef on which South Korea has constructed the Ieodo Ocean Research Station. While neither country claims the rock as territory, the PRC has objected to Korean activities there as a breach of its EEZ rights.

Navy of the People's Republic of China (PRC)

In their sphere of naval operations along their littoral (in the East and South China Seas), China today possesses more naval vessels than those of the US Navy.[17] US Presidents Barack Obama and Donald Trump have given priority to US naval operations, under the US Indo-Pacific Command, to expand its sphere of influence in the Pacific Ocean, to counter China's growing strength, and to be ready for any unforeseen challenges in the future.[18]