Infinite Construction - STEAM
The distance around the Earth, either around the equator or around the poles
For modern definitions and measurements, see Earth radius.

Measurement of Earth's circumference has been important to navigation since ancient times. The first known scientific measurement and calculation was done by Eratosthenes, who achieved a great degree of precision in his computation.[2] Treated as a sphere, determining Earth's circumference would be its single most important measurement.[3] Earth deviates from spherical by about 0.3%, as characterized by flattening.

The measure of Earth's circumference is the most famous among the results obtained by Eratosthenes,[4] who estimated that the meridian has a length of 252,000 stadia, with an error on the real value between -2.4% and +0.8% (assuming a value for the stadion between 155 and 160 metres).[2] Eratosthenes described his technique in a book entitled On the measure of the Earth, which has not been preserved.

Measure of Earth's circumference according to Cleomedes' simplified version, based on the incorrect assumption that Syene is on the Tropic of Cancer and on the same meridian as Alexandria

Eratosthenes' method to calculate the Earth's circumference has been lost; what has been preserved is the simplified version described by Cleomedes to popularise the discovery.[5] Cleomedes invites his reader to consider two Egyptian cities, Alexandria and Syene, modern Assuan:

Under the previous assumptions, writes Cleomedes, you can measure the Sun's angle of elevation at noon of the summer solstice in Alexandria, by using a vertical rod (a gnomon) of known length and measuring the length of its shadow on the ground; it is then possible to calculate the angle of the Sun's rays, which he claims to be about 7°, or 1/50th the circumference of a circle. Taking the Earth as spherical, the Earth's circumference would be fifty times the distance between Alexandria and Syene, that is 250,000 stadia. Since 1 Egyptian stadium is equal to 157.5 metres, the result is 39,375 km, which is 1.6% less than the real number, 40,008 km.

Eratosthenes' method was actually more complicated, as stated by the same Cleomedes, whose purpose was to present a simplified version of the one described in Eratosthenes' book. The method was based on several surveying trips conducted by professional bematists, whose job was to precisely measure the extent of the territory of Egypt for agricultural and taxation-related purposes.[2] Furthermore, the fact that Eratosthenes' measure corresponds precisely to 252,000 stadia might be intentional, since it is a number that can be divided by all natural numbers from 1 to 10: some historians believe that Eratosthenes changed from the 250,000 value written by Cleomedes to this new value to simplify calculations;[7] other historians of science, on the other side, believe that Eratosthenes introduced a new length unit based on the length of the meridian, as stated by Pliny, who writes about the stadion “according to Eratosthenes' ratio”.[2][8]

Posidonius calculated the Earth's circumference by reference to the position of the star Canopus. As explained by Cleomedes, Posidonius observed Canopus on but never above the horizon at Rhodes, while at Alexandria he saw it ascend as far as ​7 1⁄2 degrees above the horizon (the meridian arc between the latitude of the two locales is actually 5 degrees 14 minutes). Since he thought Rhodes was 5,000 stadia due north of Alexandria, and the difference in the star's elevation indicated the distance between the two locales was 1/48 of the circle, he multiplied 5,000 by 48 to arrive at a figure of 240,000 stadia for the circumference of the earth.[9] It is generally thought that the stadion used by Posidonius was almost exactly 1/10 of a modern statute mile. Thus Posidonius's measure of 240,000 stadia translates to 24,000 mi (39,000 km), not much short of the actual circumference of 24,901 mi (40,074 km).[9] Strabo noted that the distance between Rhodes and Alexandria is 3,750 stadia, and reported Posidonius's estimate of the Earth's circumference to be 180,000 stadia or 18,000 mi (29,000 km).[10] Pliny the Elder mentions Posidonius among his sources and without naming him reported his method for estimating the Earth's circumference. He noted, however, that Hipparchus had added some 26,000 stadia to Eratosthenes's estimate. The smaller value offered by Strabo and the different lengths of Greek and Roman stadia have created a persistent confusion around Posidonius's result. Ptolemy used Posidonius's lower value of 180,000 stades (about 33% too low) for the earth's circumference in his Geography. This was the number used by Christopher Columbus in order to underestimate the distance to India as 70,000 stades.[11]

Around AD 525, the Indian mathematician and astronomer, Aryabhata wrote Aryabhatiya, in which he calculated the diameter of earth to be of 1,050 yojanas, which is roughly 12,500 kilometers.[citation needed]

Around AD 830, Caliph Al-Ma'mun commissioned a group of Muslim astronomers led by Al-Khwarizmi to measure the distance from Tadmur (Palmyra) to Raqqa, in modern Syria. They calculated the Earth's circumference to be within 15% of the modern value, and possibly much closer. How accurate it actually was is not known because of uncertainty in the conversion between the medieval Arabic units and modern units, but in any case, technical limitations of the methods and tools would not permit an accuracy better than about 5%.[12] 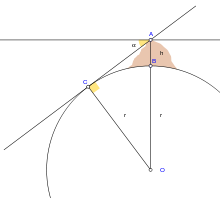 Diagram showing how al-Biruni was able to calculate the Earth's circumference from a high point and a low point at the same location.

A more convenient way to estimate was provided in Al-Biruni's Codex Masudicus (1037). In contrast to his predecessors, who measured the Earth's circumference by sighting the Sun simultaneously from two different locations, al-Biruni developed a new method of using trigonometric calculations, based on the angle between a plain and mountain top, which made it possible for it to be measured by a single person from a single location.[12] From the top of the mountain, he sighted the dip angle which, along with the mountain's height (which he calculated beforehand), he applied to the law of sines formula. This was the earliest known use of dip angle and the earliest practical use of the law of sines.[13] However, the method could not provide more accurate results than previous methods, due to technical limitations, and so al-Biruni accepted the value calculated the previous century by the al-Ma'mun expedition.[12]

1,700 years after Eratosthenes's death, Christopher Columbus studied what Eratosthenes had written about the size of the Earth. Nevertheless, based on a map by Toscanelli, he chose to believe that the Earth's circumference was 25% smaller. If, instead, Columbus had accepted Eratosthenes's larger value, he would have known that the place where he made landfall was not Asia, but rather a New World.[14]

Historical use in the definition of units of measurement

Both the metre and the nautical mile were originally defined as a subdivision of the Earth's circumference; today the circumference around the poles is very nearly 40,000 km and 360 × 60 nautical miles long.[15]

In 1617 the Dutch scientist Willebrord Snellius assessed the circumference of the Earth at 24,630 Roman miles (24,024 statute miles). Around that time British mathematician Edmund Gunter improved navigational tools including a new quadrant to determine latitude at sea. He reasoned that the lines of latitude could be used as the basis for a unit of measurement for distance and proposed the nautical mile as one minute or one-sixtieth (1/60) of one degree of latitude. As one degree is 1/360 of a circle, one minute of arc is 1/21600 of a circle – such that the polar circumference of the Earth would be exactly 21,600 miles. Gunter used Snell's circumference to define a nautical mile as 6,080 feet, the length of one minute of arc at 48 degrees latitude.[16]

In 1791, the French Academy of Sciences selected the circumference definition over the alternative pendular definition because the force of gravity varies slightly over the surface of the Earth, which affects the period of a pendulum.[17] To establish a universally accepted foundation for the definition of the metre, more accurate measurements of this meridian were needed. The French Academy of Sciences commissioned an expedition led by Jean Baptiste Joseph Delambre and Pierre Méchain, lasting from 1792 to 1799, which attempted to accurately measure the distance between a belfry in Dunkerque and Montjuïc castle in Barcelona to estimate the length of the meridian arc through Dunkerque. This portion of the meridian, assumed to be the same length as the Paris meridian, was to serve as the basis for the length of the half meridian connecting the North Pole with the Equator. The problem with this approach is that the exact shape of the Earth is not a simple mathematical shape, such as a sphere or oblate spheroid, at the level of precision required for defining a standard of length. The irregular and particular shape of the Earth smoothed to sea level is represented by a mathematical model called a geoid, which literally means "Earth-shaped". Despite these issues, in 1793 France adopted this definition of the metre as its official unit of length based on provisional results from this expedition. However, it was later determined that the first prototype metre bar was short by about 200 micrometres because of miscalculation of the flattening of the Earth, making the prototype about 0.02% shorter than the original proposed definition of the metre. Regardless, this length became the French standard and was progressively adopted by other countries in Europe.[17]