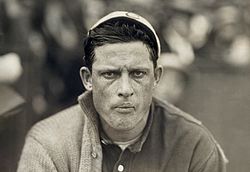 In baseball statistics, earned run average (ERA) is the average of earned runs given up by a pitcher per nine innings pitched (i.e. the traditional length of a game). It is determined by dividing the number of earned runs allowed by the number of innings pitched and multiplying by nine. Thus, a lower ERA is better. Runs resulting from passed balls or defensive errors (including pitchers' defensive errors) are recorded as unearned runs and omitted from ERA calculations.

Henry Chadwick is credited with devising the statistic, which caught on as a measure of pitching effectiveness after relief pitching came into vogue in the 1900s. Prior to 1900—and, in fact, for many years afterward—pitchers were routinely expected to pitch a complete game, and their win-loss record was considered sufficient in determining their effectiveness.

After pitchers like James Otis Crandall and Charley Hall made names for themselves as relief specialists, gauging a pitcher's effectiveness became more difficult using the traditional method of tabulating wins and losses. Some criterion was needed to capture the apportionment of earned-run responsibility for a pitcher in games that saw contributions from other pitchers for the same team. Since pitchers have primary responsibility for putting opposing batters out, they must assume responsibility when a batter they do not retire at the plate moves to base, and eventually reaches home, scoring a run. A pitcher is assessed an earned run for each run scored by a batter (or that batter's pinch-runner) who reaches base while batting against that pitcher. The National League first tabulated official earned run average statistics in 1912 (the outcome was called "Heydler's statistic" for a while, after then-NL secretary John Heydler), and the American League later accepted this standard and began compiling ERA statistics.

Recently[when?] written baseball encyclopedias display ERAs for earlier years, but these were computed retroactively. Negro League pitchers are often rated by RA, or total runs allowed, since the statistics available for Negro League games did not always distinguish between earned and unearned runs.

As with batting average, the definition of a good ERA varies from year to year. During the dead-ball era of the 1900s and 1910s, an ERA below 2.00 (two earned runs allowed per nine innings) was considered good. In the late 1920s and through the 1930s, when conditions of the game changed in a way that strongly favored hitters, a good ERA was below 4.00; only the highest caliber pitchers, for example Dazzy Vance or Lefty Grove, would consistently post an ERA under 3.00 during these years. In the 1960s, sub-2.00 ERAs returned, as other influences such as ballparks with different dimensions were introduced. In 2019[when?], an ERA under 4.00 is again considered good.

Some researchers[who?] dissent from the official Major League Baseball record and claim that the pitcher with the all-time lowest earned run average is Tim Keefe, who had an earned run average of 0.86 in 1880 while appearing in 12 of his team's 83 games and pitching 105 innings (with a win-loss record of 6-6). But a purported record based on so few innings pitched is highly misleading.[according to whom?] Over the years, more than a dozen part-time pitchers have pitched 105 or more innings and had an earned run average lower than 0.86. Major League Baseball recognizes many records from the 19th century—including Will White's 1879 record of 680 innings pitched, Charles Radbourn's 1884 record of 59 wins, and Pud Galvin's 1883 record for 75 games started, but does not recognize Keefe as the pitcher having the all-time lowest single season earned run average.

Some sources may list players with infinite ERAs. This can happen if a pitcher allows one or more earned runs without retiring a batter (usually in a single appearance). Additionally, an undefined ERA occasionally occurs at the beginning of a baseball season. It is sometimes incorrectly displayed as zero or as the lowest ranking ERA.

At times it can be misleading to judge relief pitchers solely on ERA, because they are charged only for runs scored by batters who reached base while batting against them. Thus, if a relief pitcher enters the game with his team leading by 1 run, with 2 outs and the bases loaded, and then gives up a single which scores 2 runs, he is not charged with those runs. If he retires the next batter (and pitches no more innings), his ERA for that game will be 0.00 despite having surrendered the lead. (He is likely recorded with a blown save.) Starting pitchers operate under the same rules but are not called upon to start pitching with runners already on base. In addition, relief pitchers know beforehand that they will only be pitching for a relatively short while, allowing them to exert themselves more for each pitch, unlike starters who typically need to conserve their energy over the course of a game in case they are asked to pitch 7 or more innings. The reliever's freedom to use their maximum energy for a few innings, or even for just a few batters, helps relievers keep their ERAs down.

ERA, taken by itself, can also be misleading when trying to objectively judge starting pitchers, though not to the extent seen with relief pitchers.

The advent of the designated hitter rule in the American League in 1973 made the pitching environment significantly different. Since then, pitchers spending all or most of their careers in the AL have been at a disadvantage in maintaining low ERAs, compared to National League pitchers who can often get an easy out when pitching to the opposition's pitcher, who is usually not a very good batter. Since 1997, when teams began playing teams from the other league during the regular season, the DH rule is in effect only when such interleague games are played in an American League park.

This difference between the leagues (the DH) also affects relievers, but not to the same degree. This is because National League relievers actually pitch to pitchers less often than NL starters do for a number of reasons, chiefly because relievers are usually active in later innings when pinch hitters tend to be used in the pitcher's batting spot.

ERA is also affected somewhat by the ballpark in which a pitcher's team plays half its games, as well as the tendency of hometown official scorers to assign errors instead of base hits in plays that could be either.

As an extreme example, pitchers for the Colorado Rockies have historically faced many problems, all damaging to their ERAs. The combination of high altitude (5,280 ft or 1,610 m) and a semi-arid climate in Denver causes fly balls to travel up to 10% farther than at sea level. Denver's altitude and low humidity also reduce the ability of pitchers to throw effective breaking balls, due to both reduced air resistance and difficulty in gripping very dry baseballs. These conditions have been countered to some extent since 2002 by the team's use of humidors to store baseballs before games. These difficult circumstances for Rockies pitchers may not adversely affect their win-loss records, since opposing pitchers must deal with the same problems. Indeed, hometown hurlers have some advantage in any given game since they are physically acclimated to the altitude and often develop techniques to mitigate the challenges of this ballpark. Still, conditions there tend to inflate Rockies' ERAs relative to the rest of the league.

In modern baseball, sabermetrics uses several defense independent pitching statistics (DIPS) including a Defense-Independent ERA in an attempt to measure a pitcher's ability regardless of factors outside his control. Further, because of the dependence of ERA on factors over which a pitcher has little control, forecasting future ERAs on the basis of the past ERAs of a given pitcher is not very reliable and can be improved if analysts rely on other performance indicators such as strike out rates and walk rates. For example, this is the premise of Nate Silver's forecasts of ERAs using his PECOTA system.[2] Silver also developed a "quick" earned run average (QuikERA or QERA) to calculate an ERA from peripheral statistics including strikeouts, walks, and groundball percentage. Unlike peripheral ERA or PERA, it does not take into account park effects.[3] Another statistic derived from ERA is Adjusted ERA, also called ERA+, which adjusts a pitcher's ERA to a scale where 100 is average for the league and takes into account the various dimensions and other factors of each ballpark.

Because of rules changes post-1920, most notably the abolition of the spitball and frequent replacement of soiled or scuffed baseballs, the increased importance of the home run (largely due to Babe Ruth), and the American League's adoption of the designated hitter rule, ERAs have been noticeably higher than in the early decades of the sport.

This is a list of the lowest ERAs among pitchers that played their entire careers after 1920 (minimum 1,000 innings pitched). Note that four of the top seven (Clayton Kershaw, Jacob deGrom, Whitey Ford and Sandy Koufax) were primarily starting pitchers. Hoyt Wilhelm was a reliever for most of his career, while the other two are closers.