Neighborhood of Los Angeles in California, United States of America

The eagle rock at dusk, shown here above California State Route 134 (the Ventura Freeway), north of Downtown Los Angeles, at the border of Pasadena, California. 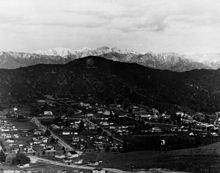 Eagle Rock is a neighborhood of Northeast Los Angeles, located between the cities of Glendale and Pasadena, abutting the San Rafael Hills in Los Angeles County, California. Eagle Rock is named after a large rock whose shadow resembles an eagle with its wings outstretched. Eagle Rock was once part of the Rancho San Rafael under Spanish and Mexican governorship. In 1911, Eagle Rock was incorporated as a city, and in 1923 it combined with the City of Los Angeles.

Today, it is an ethnically diverse, relatively high-income neighborhood (by national standards)—the latter of which has risen in part due to the gentrification of Northeast Los Angeles that began in the 2000s and picked up in the 2010s.[4] The neighborhood is known for being the home of Occidental College and for a counterculture element among its 34,000 residents. Eagle Rock maintains a number of historically significant buildings and has a connection with the motion picture industry.

A massive boulder at the district's northern edge contains an indentation which casts a bird-shaped shadow on the rock at certain times of day, giving the neighborhood its name.[5]

Before the arrival of European settlers, the secluded valley below the San Rafael Hills that is roughly congruent to Eagle Rock's present boundaries was inhabited by the Tongva people, whose staple food was the acorns from the valley's many oak trees.[5][6] These aboriginal inhabitants were displaced by Spanish settlers in the late 18th century, with the area incorporated into the Rancho San Rafael.[6] Following court battles, the area known as Rancho San Rafael was divided into 31 parcels in 1870. Benjamin Dreyfus was awarded what is now called Eagle Rock.[6] In the 1880s Eagle Rock existed as a farming community.

The arrival of American settlers and the growth of Los Angeles resulted in steadily increasing semi-rural development in the region throughout the late 19th century. The construction of Henry Huntington's Los Angeles Railway trolley line up Eagle Rock Boulevard to Colorado Boulevard and on Colorado to Townsend Avenue commenced the rapid suburbanization of the Eagle Rock Valley.

Although Eagle Rock—which is geographically located between the cities of Pasadena and Glendale—was once incorporated as Eagle Rock City in 1911, it was thereafter annexed to the City of Los Angeles in 1923 due to need for an adequate water supply and a high school.[7]

Several of the major crime sprees that have become part of Los Angeles' late 20th century history have left their mark on the neighborhood. An early victim of the Hillside Strangler was discovered in an Eagle Rock neighborhood on October 31, 1977. The discovery, along with the successive murders of at least 10 other women in the area over the course of five months, rocked what was then a small, close-knit community on the outskirts of Los Angeles. In an opinion piece to the Los Angeles Times on December 6, 1977, a resident under the pseudonym Deirdre Blackstone wrote of the fear experienced by the community: "Groups of gum-chewing girls in look-alike hairdos and jeans who used to haunt the Eagle Rock Plaza — they too are keeping close to home ... We are all afraid. For women living alone, ours is an actual visceral fear that starts at the feet. Then it hits the knees — and finally it grips the mind." Two men, Kenneth Bianchi and Angelo Buono, were subsequently convicted of the murders.

On the night of March 20, 1985, an 8-year-old girl was abducted from her home in Eagle Rock and sexually assaulted by a man dubbed the "Valley Intruder," "Walk-in Killer" and "The Night Stalker," later identified as Richard Ramirez. This was the seventh in a long string of murders and sexual assaults committed by Ramirez in Los Angeles and San Francisco before he was apprehended.[8]

In 2002, an effort to designate an area of the community as "Philippine Village" for the large Filipino American population was stopped.[9]

Like the surrounding areas of Northeast Los Angeles, Eagle Rock has undergone gentrification. Beginning in the 2000s and picking up speed in the 2010s, the “authentic urbanism” and “small-town intimacy” of the area's boulevards have played a role in drawing young professionals and fostering an emergent hipster culture.[10][11] As a result, housing prices have dramatically risen and a new wave of restaurants, coffee shops, bars, and art galleries have appeared over the last decade.

The neighborhood is inhabited by a wide variety of ethnic and socioeconomic groups and the creative class.[5][6] Over the past decade the Eagle Rock and neighboring Highland Park have been experiencing gentrification as young urban professionals have moved from nearby neighborhoods such as Los Feliz and Silver Lake.[6] A core of counter-culture writers, artists and filmmakers has existed in Eagle Rock since the 1920s.[6]

The median yearly household income in 2008 dollars was $67,253, considered high for the city. The neighborhood's income levels, like its ethnic composition, can still be marked by notable diversity, but typically ranges from lower-middle to upper-middle class.[12] Renters occupied 43.9% of the housing stock, and house- or apartment-owners held 56.1%. The average household size of 2.8 people was considered normal for Los Angeles.[1]

Eagle Rock is bordered by the City of Glendale on the north and west, Highland Park on the southeast, Glassell Park on the southwest and the cities of Pasadena and South Pasadena on the east. Major thoroughfares include Eagle Rock Boulevard and Colorado Boulevard, with Figueroa Street along the eastern boundary. The Glendale and Ventura freeways run along the district's western and northern edges, respectively.

Hill Avenue, now Hill Drive, is historically considered one of Eagle Rock's most beautiful streets.[weasel words] Other streets include Royal Drive (now Mt. Royal Drive), Acacia Street (now Laverna Avenue), Kenilworth Avenue (now Hermosa Avenue), Highland Avenue (now Highland View Avenue), and Fairmont Avenue (now Maywood Avenue).[6] In the 1950s, newer streets such as Kincheloe Drive were extended into the hillsides for the building of larger homes with a view of the city. Today these streets are dotted with large and expensive homes on wide lots.

The neighborhood is home to many historic and architecturally significant homes, many done in the Craftsman,[5] Georgian, Streamline Moderne,[6] Art Deco and Mission Revival styles.[5]

Eagle Rock, once a separate municipality, still has its original City Hall (Historic and Cultural Monument #59, 2035 Colorado Blvd.).[13] Its original library, which was built with the aid of a Carnegie grant in 1914, was replaced in 1927 with a new structure which used one wall and the basement of the old library. This building (2225 Colorado Blvd.) has been listed on the National Register of Historic Places and converted into the Center for the Arts, Eagle Rock, previously the Eagle Rock Community Cultural Center.[14]

Intersection of Eagle Rock Boulevard and Colorado Boulevard. Eagle Rock has been used as a backdrop for movies and television shows

With such a close proximity to Hollywood and the major motion picture studios, this community has often been a favored choice as a film location. Cameos include Top Gun, The Hunt for Red October, and a second-season episode of The O.C. Star Trek III was partially filmed on the campus of Occidental College. This campus also served as "California University" in the 1990s television series Beverly Hills, 90210. Quentin Tarantino filmed parts of Reservoir Dogs here and in neighboring Highland Park. Other movies filmed almost entirely in Eagle Rock include; all of the exterior scenes of The Incredible Shrinking Woman[15] (1981) starring Lily Tomlin, Record City[16] (1978) with Ed Begley, Jr. was filmed in its entirety in a defunct auto paint shop, and The Unwed Father[17] (1974) starring Joseph Bottoms and Kay Lenz had all of its exterior location shots filmed on the Eagle Rock High School campus.[18] Avril Lavigne's music video "Complicated" was mostly shot in the Eagle Rock Mall as well as some scenes from the popular television series Glee. Pharrell's music video "Happy" features several scenes shot in Eagle Rock, with locations including the CVS Pharmacy on Eagle Rock Blvd., Eagle Rock High School and the All-Star Lanes.[19]

Ben Affleck, a former Occidental College student, lived on Hill Drive with then-roommate and co-writer Matt Damon while they wrote the script for Good Will Hunting, which would go on to win them a Best Original Screenplay Academy Award.[20]

Today, unlike its neighboring cities of Glendale and Pasadena, Eagle Rock is part of the City of Los Angeles.[21]

The Eagle Rock Neighborhood Council (ERNC)[23] meets the first Tuesday of every month at 7 p.m. at Eagle Rock City Hall.[24]

Thirty percent of Eagle Rock residents aged 25 and older had earned a four-year degree by 2000, an average percentage for the city.[1] 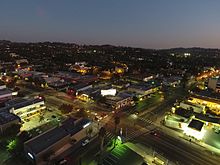 Eagle Rock is the site of Occidental College, which was first established in Boyle Heights in 1887, but a fire destroyed its original site in 1896; from there the college moved to a temporary location in Downtown Los Angeles until 1898 when it moved to Highland Park, and then to Eagle Rock in 1914. The campus was designed by architect Myron Hunt.[25][26]

Precollegiate schools within the Eagle Rock boundaries are:[27]