EPDM rubber (ethylene propylene diene monomer rubber)[1][2][3] is a type of synthetic rubber that is used in many applications.

EPDM is an M-Class rubber under ASTM standard D-1418; the M class comprises elastomers having a saturated chain of the polyethylene type (the M deriving from the more correct term polymethylene). EPDM is made from ethylene, propylene, and a diene comonomer that enables crosslinking via Sulfur vulcanization. The earlier relative of EPDM is EPR, ethylene-propylene rubber, that contains no diene units and can only be crosslinked using radical methods such as peroxides.[4] Dienes used in the manufacture of EPDM rubbers are ethylidene norbornene (ENB), dicyclopentadiene (DCPD), and vinyl norbornene (VNB).

EPDM is derived from polyethylene into which 45-85 wt% of propylene have been copolymerised to reduce the formation of the typical polyethylene crystallinity. EPDM is a semi-crystalline material with ethylene-type crystal structures at higher ethylene contents, becoming essentially amorphous at ethylene contents that approach 50 wt%.

Rubbers with saturated polymer backbones, such as EPDM, have much better resistance to heat, light and ozone than unsaturated rubbers such as natural rubber, SBR or polychloroprene (Neoprene). As such, EPDM can be formulated to be resistant to temperatures as high as 150 °C, and, properly formulated, can be used outside for many years or decades without degradation. EPDM has good low temperature properties, with elastic properties to temperatures as low as -40 °C depending on the grade and the formulation. 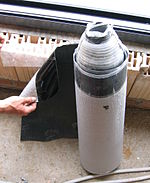 A roll of EPDM flashing with fleece on the back, used for waterproofing roofs

As with most rubbers, EPDM is always used compounded with fillers such as carbon black and calcium carbonate, with plasticisers such as paraffinic oils, and has useful rubbery properties only when crosslinked. Crosslinking mostly takes place via vulcanisation with sulphur, but is also accomplished with peroxides (for better heat resistance) or with phenolic resins. High energy radiation such as from electron beams is sometimes used for producing foams and wire and cable.

EPDM is compatible with polar substances, e.g. fireproof hydraulic fluids, ketones, hot and cold water, and alkalis. It is incompatible with most hydrocarbons, such as oils, kerosene, aromatic, gasoline, as well as halogenated solvents. EPDM exhibits outstanding resistance to heat, ozone, steam and weather. It is an electrical insulator.

Typical properties of EPDM vulcanizates are given below. EPDM can be compounded to meet specific properties to a limit, depending first on the EPDM polymers available, then the processing and curing method(s) employed. EPDMs are available in a range of molecular weights (indicated in terms of Mooney viscosity ML(1+4) at 125 °C), varying levels of ethylene, third monomer, and oil content.

As a durable elastomer, EPDM is conformable, impermeable and a good insulator. Solid EPDM and expanded EPDM foam are often used for sealing and gasketing, as well as membranes and diaphragms. EPDM is often used when a component must prevent fluid flow while remaining flexible. It can also used to provide cushioning or elasticity. While EPDM has decent tensile strength, its flexibility makes it inappropriate for rigid parts such as gears, shafts, and structural beams.

It is used to create weatherstripping, seals on doors for refrigerators and freezers (where it also acts as an insulator), face masks for industrial respirators, glass-run channels, radiators, garden and appliance hose (where it is used as a hose material as well as for gaskets), tubing, washers, O-rings, electrical insulation, and geomembranes.

A common use is in vehicles, where EPDM is used for door seals, window seals, trunk seals, and sometimes hood seals.[7] Other uses in vehicles include cooling system circuit hoses; water pumps, thermostats, EGR valves, EGR coolers, heaters, oil coolers, radiators, and degas bottles are connected with EPDM hoses. EPDM is also used as charge air tubing on turbocharged engines to connect the cold side of the charge air cooler (intercooler) to the intake manifold.

EPDM seals can be a source of squeaking noise, due to movement of the seal against the opposing surface (and its attendant friction). The noise can be alleviated using specialty coatings that are applied at the time of manufacture of the seal. Such coatings can also improve the chemical resistance of EPDM rubber. Some vehicle manufacturers also recommend a light application of silicone dielectric grease to weatherstripping to reduce noise[citation needed].

This synthetic rubber membrane has also been used for flat roofs because of its durability and low maintenance costs.[8] As a roofing membrane it does not pollute the run-off rainwater (which is of vital importance for rainwater harvesting).[citation needed]

It is used for belts, electrical insulation, vibrators, solar panel heat collectors, and speaker cone surrounds. It is also used as a functional additive to modify and enhance the impact characteristics of thermoset plastics, thermoplastics, and many other materials.[9][10]

EPDM is also used for components that provide elasticity; for example, it is used for bungee cords, elastic tie-downs, straps, and hangers that attach exhaust systems to the underfloor of vehicles (since a rigid connection would transfer vibration, noise and heat to the body). It is also used for cushioned edge guards and bumpers on appliances, equipment and machinery.