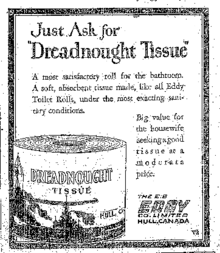 On April 26, 1900, a large fire destroyed most of the company's facilities, but it was back in operation in less than a year. Eddy died in 1906. In 1926, R.B. Bennett gained control of the company. In 1928, the match business was sold off as the Eddy Match Company. In 1943, the company was sold to George Weston, Ltd.. The company acquired the paper mills of the J.R. Booth Company in 1946.

In 1998, the company was taken over by Domtar Inc. and became the E. B. Eddy Division of that company. At the time of the purchase, the company had facilities in Hull, Quebec, Timmins, Ontario, Espanola, Ontario, Chapleau, Ontario, Pembroke, Ontario, Sault Ste. Marie, Ontario, Delta, British Columbia and Port Huron, Michigan.