The Dutch–Indonesian Round Table Conference was held in The Hague from 23 August to 2 November 1949, between representatives of the Kingdom of the Netherlands, the Republic of Indonesia and the Federal Consultative Assembly, representing various states the Dutch had created in the Indonesian archipelago.

By mid-1946, both sides were under international pressure to negotiate.[2] The Dutch favoured a federal Indonesian state, and organised the Malino Conference in July 1946, which led to the establishment of the State of East Indonesia. In November, the Dutch and Indonesian sides reached an agreement at Linggadjati, in which the Netherlands agreed to recognize republican rule over Java, Sumatra and Madura, and that republic would become a constituent state of a federal United States of Indonesia. On 28 January 1949, the United Nations Security Council passed Resolution 67, calling for an end to the recent Dutch military offensive against republican forces in Indonesia and demanding the restoration of the republican government. It also urged the resumption of negotiations to find a peaceful settlement between the two sides.[3]

Following the Roem–Van Roijen Agreement of 6 July, which effectively endorsed the Security Council resolution, Mohammad Roem said that the Republic of Indonesia—whose leaders were still in exile on Bangka Island—would participate in the Round Table Conference to accelerate the transfer of sovereignty.[4]

The Indonesian government, in exile for over six months, returned to the temporary capital at Yogyakarta on 6 July 1949. To ensure commonality of negotiating position between the republic and the federal delegates, from 31 July until 2 August, Inter-Indonesian Conferences were in Yogyakarta between all component authorities of the future United States of Indonesia. The delegates agreed on the basic principles and outline for the Federal Constitution of 1949.[5]

Following preliminary discussions sponsored by the UN Commission for Indonesia in Jakarta, it was decided the Round Table Conference would be held in The Hague. 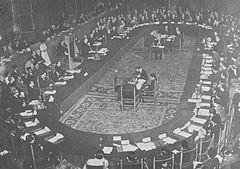 The conference in session

Negotiations, which took place from 23 August to 2 November 1949, were assisted by the United Nations Commission for Indonesia. The Dutch, Republic of Indonesia and Federal Consultative Assembly delegations reached agreement resulting in a number of documents, namely a Charter of Transfer of Sovereignty—to come into immediate effect—a statute of union, a draft constitution, an economic agreement and agreements on social and military affairs.[6][7]

The Dutch–Indonesian Union would not have any powers: it would be a consultative body with a permanent secretariat, a court of arbitration to settle any legal disputes, and a minimum of two ministerial conferences every year. It would be headed by the Dutch Queen in an entirely symbolic role.[8]

The delegations also reached agreement on the withdrawal of Dutch troops "within the shortest possible time,"[This quote needs a citation] and for the United States of Indonesia to grant most favoured nation status to the Netherlands. In addition, there would be no discrimination against Dutch nationals or companies and the republic agreed to take over trade agreements negotiated by the Dutch East Indies.[9] However the two major areas of disagreement were over the debts of the Dutch colonial administration and the status of Western New Guinea.

Negotiations over the internal and external debts of the Dutch East Indies colonial administration were protracted, with each side presenting their own calculations and arguing over whether the United States of Indonesia should be responsible for debts incurred by the Dutch after the Japanese occupation of Indonesia in 1942. In particular the Indonesian delegations were indignant at having to cover what it saw as the costs of Dutch military action against it. Finally, thanks to the intervention of the United States member of the UN Commission on Indonesia, the Indonesian side came to realise that agreeing to pay part of the Dutch debt would be the price they would have to pay for the transfer of sovereignty. On 24 October, the Indonesian delegations agreed that Indonesia would take over approximately ƒ4.3 billion of Dutch East Indies government debt.[10]

The issue of the inclusion or not of Western New Guinea almost resulted in the talks becoming deadlocked. The Indonesian delegations took the view that Indonesia should comprise the entire territory of Dutch East Indies. The Dutch refused to compromise, claiming Western New Guinea had no ethnic ties with the rest of the archipelago.[11] Despite Dutch public opinion supporting transfer of Western New Guinea to Indonesia, the Dutch cabinet was worried it would not be able to ratify the Round Table Agreement in parliament if it conceded this point.[12]

Finally, in the early hours of 1 November 1949, a compromise was reached: the status of Western New Guinea would be determined through negotiations between the United States of Indonesia and the Netherlands within a year of the transfer of sovereignty.[13] The conference was officially closed in the Dutch parliament building on 2 November.

The Dutch parliament debated the agreement, and the upper and lower houses ratified it on 21 December 1949 by the two-thirds majority needed. Despite criticism in particular of the Indonesian assumption of Dutch government debt and the unresolved status of West Papua, the Indonesian legislature, the Central Indonesian National Committee, ratified the agreement on 14 December. Sovereignty was transferred to the United States of Indonesia on 27 December.[12][14]