Enlarge ISBN (identifier) Wikipedia:Citation needed
A narrow basin that can be sealed and pumped dry to allow work on a vessel 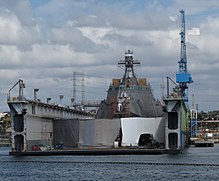 A US Navy littoral combat ship in drydock, NASSCO 2012

A dry dock (sometimes dry-dock or drydock) is a narrow basin or vessel that can be flooded to allow a load to be floated in, then drained to allow that load to come to rest on a dry platform. Dry docks are used for the construction, maintenance, and repair of ships, boats, and other watercraft.

The Greek author Athenaeus of Naucratis (V 204c-d) reports that the dry dock was invented in Ptolemaic Egypt in the reign of Ptolemy IV Philopator (221-204 BC) on the occasion of the launch of the enormous Tessarakonteres rowing ship:[1]

But after that a Phoenician devised a new method of launching it (the Tessarakonteres), having dug a trench under it, equal to the ship itself in length, which he dug close to the harbour. And in the trench he built props of solid stone five cubits deep, and across them he laid beams crosswise, running the whole width of the trench, at four cubits' distance from one another; and then making a channel from the sea he filled all the space which he had excavated with water, out of which he easily brought the ship by the aid of whatever men happened to be at hand; then closing the entrance which had been originally made, he drained the water off again by means of engines (organois); and when this had been done the vessel rested securely on the before-mentioned cross-beams.[2]

It has been calculated that a dock for a vessel of such a size might have had a volume of 750,000 gallons of water.[3] In Roman times, a shipyard at Narni, which is still studied, may have served as a dry dock.

At the beginning of the dynasty (c. +965) the two Che provinces (now Chekiang and southern Chiangsu) presented (to the throne) two dragon ships each more than 200 ft. in length. The upper works included several decks with palatial cabins and saloons, containing thrones and couches all ready for imperial tours of inspection. After many years, their hulls decayed and needed repairs, but the work was impossible as long as they were afloat. So in the Hsi-Ning reign period (+1068 to +1077) a palace official Huang Huai-Hsin suggested a plan. A large basin was excavated at the north end of the Chin-ming Lake capable of containing the dragon ships, and in it heavy crosswise beams were laid down upon a foundation of pillars. Then (a breach was made) so that the basin quickly filled with water, after which the ships were towed in above the beams. Then (breach now being closed) the water was pumped out by wheels so that the ships rested quite in the air. When the repairs were complete, the water was let in again, so that the ships were afloat once more (and could leave the dock). Finally the beams and pillars were taken away, and the whole basin covered over with a great roof so as to form a hangar in which the ships could be protected from the elements and avoid the damage caused by undue exposure.[5][6] 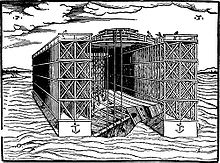 Possibly the earliest description of a floating dock comes from a small Italian book printed in Venice in 1560, called Descrittione dell'artifitiosa machina.[8] In the booklet, an unknown author asks for the privilege of using a new method for the salvaging of a grounded ship and then proceeds to describe and illustrate his approach. The included woodcut shows a ship flanked by two large floating trestles, forming a roof above the vessel. The ship is pulled in an upright position by a number of ropes attached to the superstructure.

Harland and Wolff Heavy Industries in Belfast, Northern Ireland, is the site of a large dry dock 556 by 93 metres (1,824 ft × 305 ft). The massive cranes are named after the Biblical figures Samson and Goliath.

Dry Dock 12 at Newport News Shipbuilding at 662 by 76 metres (2,172 ft × 249 ft) is the largest dry dock in the USA. The largest floating-dock in North America is named The Vigorous. It is operated by Vigor Industries in Portland, OR, in the Swan Island industrial area along the Willamette River.[10] 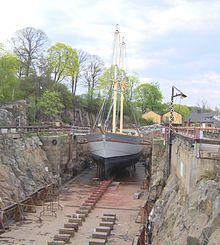 A graving dock is the traditional form of dry dock.[11] It is narrow basin, usually made of earthen berms and concrete, and closed by gates or by a caisson. When open, a vessel is floated in and the water pumped out, leaving the craft supported on blocks.

The keel blocks as well as the bilge block are placed on the floor of the dock in accordance with the "docking plan" of the ship. Routine use of dry docks is for the "graving" i.e. the cleaning, removal of barnacles and rust, and re-painting of ships' hulls.

Some fine-tuning of the ship's position can be done by divers while there is still some water left to manoeuvre it about. It is extremely important that supporting blocks conform to the structural members so that the ship is not damaged when its weight is supported by the blocks. Some anti-submarine warfare warships have protruding sonar domes, requiring that the hull of the ship be supported several metres from the bottom of the drydock.

Once the remainder of the water is pumped out, the ship can be freely inspected or serviced. When work on the ship is finished, water is allowed to re-enter the dry dock and the ship is carefully refloated.

Modern graving docks are box-shaped, to accommodate the newer, boxier ship designs, whereas old dry docks are often shaped like the ships that are planned to be docked there. This shaping was advantageous because such a dock was easier to build, it was easier to side-support the ships, and less water had to be pumped away.[citation needed]

Dry docks used for building Navy vessels may occasionally be built with a roof. This is done to prevent spy satellites from taking pictures of the dry dock and any ships or submarines that may be in it. During World War II, fortified dry docks were used by the Germans to protect their submarines from Allied air raids (see submarine pen).

Today, covered dry docks are usually used only when servicing or repairing a fleet ballistic missile submarine.[citation needed] Another advantage of covered dry docks is that work can take place independently of the weather; this is frequently used by modern shipyards for construction especially of complex, high-value vessels like cruise ships where delays would incur a high cost. 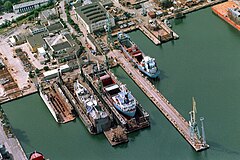 A floating dry dock is a type of pontoon for dry docking ships, possessing floodable buoyancy chambers and a "U"-shaped cross-section. The walls are used to give the dry dock stability when the floor or deck is below the surface of the water. When valves are opened, the chambers fill with water, causing the dry dock to float lower in the water. The deck becomes submerged and this allows a ship to be moved into position inside. When the water is pumped out of the chambers, the dry dock rises and the ship is lifted out of the water on the rising deck, allowing work to proceed on the ship's hull.

A large floating dry dock involves multiple rectangular sections. These sections can be combined to handle ships of various lengths, and the sections themselves can come in different dimensions. Each section contains its own equipment for emptying the ballast and to provide the required services, and the addition of a bow section can facilitate the towing of the dry dock once assembled. For smaller boats, one-piece floating dry docks can be constructed, potentially coming with their own bow and steering mechanism.[12]

Shipyards operate floating dry docks as one method for hauling or docking vessels. Floating drydocks are important in locations where porous ground prevents the use of conventional drydocks, such as at the Royal Naval Dockyard on the limestone archipelago of Bermuda. Another advantage of floating dry docks is that they can be moved to wherever they are needed and can also be sold second-hand. During World War II, the U.S. Navy used such auxiliary floating drydocks extensively to provide maintenance in remote locations. Two of these are the 1,000-foot AFDB-1 and the 850-foot AFDB-3, an Advance Base Sectional Dock, which saw action in Guam, was mothballed near Norfolk, Virginia, and was eventually towed to Portland, Maine, to become part of Bath Iron Works' repair facilities.[13][14]

A downside of floating dry docks is that unscheduled sinkings and off-design dives may take place.[15]

The "Hughes Mining Barge", or HMB-1, is a covered, floating drydock that is also submersible to support the secret transfer of a mechanical lifting device underneath the Glomar Explorer ship, as well as the development of the Sea Shadow stealth ship.

Apart from graving docks and floating dry docks, ships can also be dry docked and launched by:

Some dry docks are used during the construction of bridges, dams, and other large objects. For example, the dry dock on the artificial island of Neeltje-Jans was used for the construction of the Oosterscheldekering, a large dam in the Netherlands that consists of 65 concrete pillars weighing 18,000 tonnes each. The pillars were constructed in a drydock and towed to their final place on the seabed.

A dry dock may also be used for the prefabrication of the elements of an immersed tube tunnel, before they are floated into position, as was done with Boston's Silver Line.