Water drops falling from a tap. 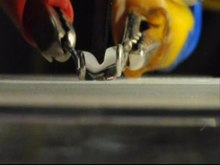 A drop or droplet is a small column of liquid, bounded completely or almost completely by free surfaces. A drop may form when liquid accumulates at the lower end of a tube or other surface boundary, producing a hanging drop called a pendant drop. Drops may also be formed by the condensation of a vapor or by atomization of a larger mass of liquid.

Drop of water bouncing on a water surface subject to vibrations

A simple way to form a drop is to allow liquid to flow slowly from the lower end of a vertical tube of small diameter. The surface tension of the liquid causes the liquid to hang from the tube, forming a pendant. When the drop exceeds a certain size it is no longer stable and detaches itself. The falling liquid is also a drop held together by surface tension.

Some substances that appear to be solid, can be shown to instead be extremely viscous liquids, because they form drops and display droplet behavior. In the famous pitch drop experiments, pitch – a substance somewhat like solid bitumen – is shown to be a liquid in this way. Pitch in a funnel slowly forms droplets, each droplet taking about 10 years to form and break off.

In the pendant drop test, a drop of liquid is suspended from the end of a tube or by any surface by surface tension. The force due to surface tension is proportional to the length of the boundary between the liquid and the tube, with the proportionality constant usually denoted

.[2] Since the length of this boundary is the circumference of the tube, the force due to surface tension is given by

where d is the tube diameter.

) with the component of the surface tension in the vertical direction (

where α is the angle of contact with the tube, and g is the acceleration due to gravity.

The limit of this formula, as α goes to 90°, gives the maximum weight of a pendant drop for a liquid with a given surface tension,

This relationship is the basis of a convenient method of measuring surface tension, commonly used in the petroleum industry. More sophisticated methods are available to take account of the developing shape of the pendant as the drop grows. These methods are used if the surface tension is unknown.[3][4]

Drop adhesion to a solid

The term droplet is a diminutive form of 'drop' – and as a guide is typically used for liquid particles of less than 500 μm diameter. In spray application, droplets are usually described by their perceived size (i.e., diameter) whereas the dose (or number of infective particles in the case of biopesticides) is a function of their volume. This increases by a cubic function relative to diameter; thus a 50 μm droplet represents a dose in 65 pl and a 500 μm drop represents a dose in 65 nanolitres.

Due to the different refractive index of water and air, refraction and reflection occur on the surfaces of raindrops, leading to rainbow formation.

The major source of sound when a droplet hits a liquid surface is the resonance of excited bubbles trapped underwater. These oscillating bubbles are responsible for most liquid sounds, such as running water or splashes, as they actually consist of many drop-liquid collisions.[6][7]

Reducing the surface tension of a body of liquid makes possible to reduce or prevent noise due to droplets falling into it.[8] This would involve adding soap, detergent or a similar substance to water. The reduced surface tension reduces the noise from dripping. 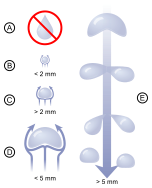 The shapes of raindrops, depending on their sizes.

The classic shape associated with a drop (with a pointy end in its upper side) comes from the observation of a droplet clinging to a surface. The shape of a drop falling through a gas is actually more or less spherical for drops less than 2 mm in diameter.[9] Larger drops tend to be flatter on the bottom part due to the pressure of the gas they move through.[10] As a result, as drops get larger, a concave depression forms which leads to the eventual breakup of the drop.

The capillary length is a length scaling factor that relates gravity and surface tension, and is directly responsible for the shape a droplet for a specific fluid will take. The capillary length stems from the Laplace pressure, using the radius of the droplet.

against radii of a droplet

Scientists traditionally thought that the variation in the size of raindrops was due to collisions on the way down to the ground. In 2009 French researchers succeeded in showing that the distribution of sizes is due to the drops' interaction with air, which deforms larger drops and causes them to fragment into smaller drops, effectively limiting the largest raindrops to about 6 mm diameter.[13] However, drops up to 10 mm (equivalent in volume to a sphere of radius 4.5 mm) are theoretically stable and could be levitated in a wind tunnel.[9] The largest recorded raindrop was 8.8 mm in diameter, located at the base of a cumulus congestus cloud in the vicinity of Kwajalein Atoll in July 1999. A raindrop of identical size was detected over northern Brazil in September 1995.[14]

In medicine, this property is used to create droppers and IV infusion sets which have a standardized diameter, in such a way that 1 millilitre is equivalent to 20 drops. When smaller amounts are necessary (such as paediatrics), microdroppers or paediatric infusion sets are used, in which 1 millilitre = 60 microdrops.[15]