The Dovzhenko Film Studios (Ukrainian: Національна кіностудія художніх фільмів імені О. Довженка, translit. Natsional'na kinostudiya khudozhnikh filmiv imeni O. Dovzhenka) is a former Soviet film production studio in Ukraine that was named after the Ukrainian film producer, Alexander Dovzhenko, in 1957. With the fall of the Soviet Union, the studio became a property of the government of Ukraine. Since 2000 the film studio was awarded national status. 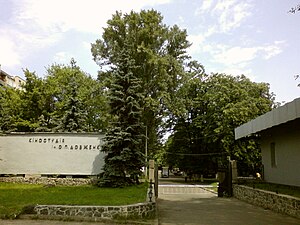 The studios began in 1920s when the All-Ukrainian Photo-Cinema-Directorate (VUFKU) announced a project proposition for the construction of a cinema factory in 1925. Out of 20 of them was chosen the project of Valerian Rykov, who led his architect group composed of students of the Architectural Department of Kyiv Art Institute in the construction of the O. Dovzhenko Film Studios beginning in 1927. It was at the time the largest in the Ukrainian SSR. Although the filming pavilions were still unfinished a year later, movie production had begun. Many memorial plates are within the studios in memory of the many film producers who had once worked here.[citation needed] One film pavilion is named Shchorsivskyi, because Olexandr Dovzhenko shot his film Shchors there.[according to whom?] This area of the studios is used as a museum.[citation needed]

The first movie of the film studio was "Ivanko and the Butcher" by director Aksel Lundin and cameraman A. Meines. Filming began on October 12, 1927 and took place at night, as pavilions were being built during the day. Many talented directors have come to the studio since the first films were shot — Alexander Dovzhenko, Arnold Kordium, Pavlo Dolyna, Leonid Lukov, Ivan Kavaleridze, Igor Savchenko, Favst Lopatynskyi; operators — Danylo Demutskyi, Yurii Yekelchyk, Mykola Topchii, Yozef Rona, I. Shekker, Oleksii Pankratiev; writers — Mykola Bazhan, Oleksandr Korniichuk, Hordii Brasiuk, V. Okhrimenko. It immediately affected the number and quality of the works and the variety of movie genres. In 1929, 10 films were already made.

Since 1930, cinema has become under the control of the state and has served to spread the ideology of communism among the population. Still, the 1930s for the Kyiv Film Factory were important years of formation.

The apple orchard on the side of the avenue near the studios was planted by the order of Dovzhenko himself. In 1957, it was named in memory of Alexander Dovzhenko.[according to whom?]

In December 2009 a studio for the digital restoration of Ukrainian films was opened on the complex.[1]