The World First Class University and First Class Academic Discipline Construction (Chinese: 世界一流大学和一流学科建设), combined together and known as Double First Class (Chinese: 双一流; pinyin: shuāngyīliú),[1][2] is a tertiary education development initiative designed by the People's Republic of China government, in 2015,[3] which aimed to comprehensively developing elite Chinese universities and their individual faculty departments into world-class institutions by the end of 2050.[4]

It was unclear whether this plan represents a new way of ranking universities in China,[4] or replaces Project 211, Project 985, or the C9 League.[5] 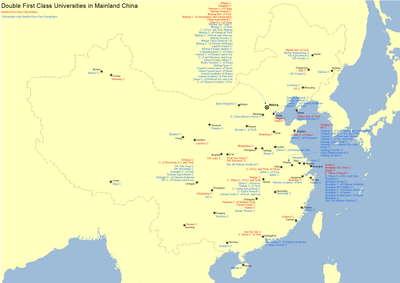 Map of the double first class universities in China

The lists of Class A, Class B, and Double Class discipline universities were issued by Chinese Ministry of Education without any ranking within the lists (by "school code").[1] These lists follow in alphabetical order:

Class A by province

Class B by province