Dorval /dɔːrˈvæl/ (French pronunciation: ​[dɔʁval]) is an on-island suburb on the island of Montreal in southwestern Quebec, Canada. In 2016, the Canadian Census indicated that the population increased by 4.2% to 18,980. Although the city has the largest surface area in the West Island, it is among the least densely populated. Montréal–Pierre Elliott Trudeau International Airport constitutes about 60% of the city's land, forcing all of Dorval's population to be concentrated in the southern part of the city.

Dorval is the oldest city in the West Island, having been founded in 1667, and one of the oldest in Canada and North America.

The history of Dorval dates back more than 350 years to 1665 when Sulpician priests established a mission on the outskirts of Ville-Marie, a French settlement which later became known as Montreal. Dorval was originally named Gentilly. It was later renamed La Présentation-de-la-Vierge-Marie. In 1691, the domain of La Présentation, originally owned by Pierre Le Gardeur de Repentigny, was acquired by Jean-Baptiste Bouchard d'Orval. It was incorporated as a village in 1892, a town in 1903, and a city in 1956. (In French it was termed a cité, an old term used to translate the English legal term "city.")

As with many other settlements on the island of Montreal, the Grand Trunk Railway, which came to Dorval in 1855, was highly instrumental in attracting many wealthier families, mostly English-speaking, in search of a summer refuge in proximity to their downtown residence and place of work. Access to Dorval from Montreal was also facilitated by the extension of streetcar service to Dorval's eastern city limits in the interwar period. After the Second World War many middle-class families migrated to Dorval from the city of Montreal and from other parts of Canada. This migration was made possible by the widening of highway 20 and by the large-scale construction of new dwellings. This new housing consisted mostly of single family homes with some townhouses and low-rise apartment buildings, built on lands previously used for agriculture and recreational activities. The post-war period also saw the construction of Dorval Gardens shopping centre in 1954, one of Greater Montreal's first mall-style shopping centres. Today the shopping centre remains the city's principal centre of retail trade.

The island named Dorval Island, settled in 1860 and located less than one kilometre offshore from Dorval, constitutes the separate city of L'Île-Dorval despite being a summer cottage community with only five permanent residents as of the Canada 2011 Census. The island is connected to the city of Dorval by a private ferry service.

On January 1, 2002, as part of the 2002–2006 municipal reorganization of Montreal, Dorval was merged into the city of Montreal, being combined with L'Île-Dorval to form the Dorval–L'Île-Dorval borough of Montreal. After a change of government and a 2004 referendum, Dorval was reconstituted as a city on January 1, 2006. Although Dorval had the legal status of cité prior to the merger, the reconstituted city has the status of ville (see Types of municipalities in Quebec). Nevertheless, the municipal government refers to itself as the "Cité de Dorval".

A large Inuit population has also established itself in Dorval but this does not appear on official census data because most Inuit choose to associate themselves with their village or reside only part-time in Dorval. 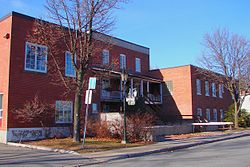 Previously Inter-Canadien had its headquarters in Dorval.[15]

Air Canada Centre, the headquarters of Air Canada, are located on the grounds of Montréal-Pierre Elliott Trudeau International Airport and in Saint-Laurent, Montreal,[16][17] near Dorval.[18] 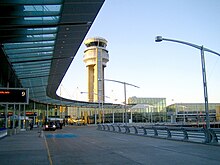