Suburb Conurbation Satellite city
Urban community that is primarily residential, from which most of the workforce commutes out

Many municipalities in the US state of New Jersey can be considered commuter towns. Here, riders wait in Maplewood for a train bound for New York City during the morning rush hour. 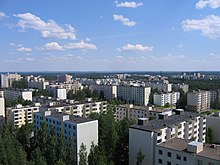 Hervanta in Tampere, Finland is mostly known its residential tower blocks, but there are also some commercial services.

A commuter town is a populated area that is primarily residential, rather than commercial or industrial. People who live in commuter towns usually work in other places. Routine travel from home to work and then from work to home is called commuting, which is where the term comes from.

A commuter town may be called by many other terms: "bedroom community" (Canada and northeastern US), "bedroom town", "bedroom suburb" (US), "dormitory town", "dormitory suburb", or, less commonly, "dormitory village" (Britain/Commonwealth/Ireland).[citation needed] In Japan, a commuter town may be referred to with the wasei-eigo coinage "bed town" (ベッドタウン, beddotaun).[1] The term "exurb" was also used starting in the 1950s for a commuter town, but especially since 2006, is generally used for areas beyond suburbs and specifically less densely built than the suburbs to which the exurbs' residents commute.[2] Commuter towns have been widely studied in numerous studies and found to contribute to stress, waste of productivity and detrimental to overall well-being of society.

Distinction between suburbs and commuter towns 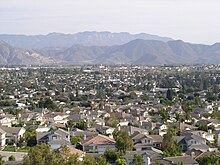 Suburbs and commuter towns often coincide, but are not synonymous. Similar to college town, resort town and mill town, the term commuter town describes the municipality's predominant economic function. A suburb, in contrast, is a community of lesser size, density, political power and/or commerce comparative to a nearby community that is usually of greater economic importance. A town's economic function may change, for example when improved transport brings commuters to industrial suburbs or railway towns in search of suburban living. Some suburbs, for example Teterboro, New Jersey and Emeryville, California, remained industrial when they became surrounded by commuter towns; many commuters work in such industrial suburbs but few reside in them; hence, they are not commuter towns.

As a general rule, suburbs are developed in areas adjacent to a main employment center, such as a town or a city, but may or may not have many jobs locally, whereas bedroom communities have few local businesses, and most residents who have jobs commute to employment centers some distance away. Commuter towns may be in rural or semi-rural areas, with a ring of green space separating them from the larger city or town. Where urban sprawl and conurbation have erased clear lines among towns and cities in large metropolitan areas, this is not the case.

Commuter towns can arise for a number of different reasons. Sometimes, as in Sleepy Hollow, New York or Tiburon, California, a town loses its main source of employment, leaving its residents to seek work elsewhere. In other cases, a pleasant small town, such as Warwick, New York, over time attracts more residents but not large businesses to employ them, requiring denizens to commute to employment centers. Another cause, particularly relevant in the American South and West, is the rapid growth of small cities. The earlier creation of the Interstate Highway System was one cause of the greatest growth was seen by the sprawling metropolitan areas of those cities. As a result, many small cities[which?] were absorbed into the suburbs of the larger cities.

Often, however, commuter towns form when workers in a region cannot afford to live where they work and must seek residency in another town with a lower cost of living. The late 20th century dot-com bubble and United States housing bubble drove housing costs in Californian metropolitan areas to historic highs, spawning exurban growth in adjacent counties. For example, most cities in western Riverside County, California can be considered exurbs of Orange County, California and Los Angeles County, California. As of 2003[update], over 80% of the workforce of Tracy, California was employed in the San Francisco Bay Area.[citation needed]

A related phenomenon is common in the resort towns of the American West that require large workforces, yet emphasize building larger single-family residences and other expensive housing. For example, the resort town of Jackson, Wyoming has spawned several nearby bedroom communities, including Victor, Idaho, Driggs, Idaho, and Alpine, Wyoming, where the majority of the Jackson workforce resides. On Long Island, New York, many of the workforce who serve The Hamptons also reside in communities more modest and more suburban than their workplace, giving rise to a daily reverse commuter flow from more dense to less dense areas.[citation needed]

In certain major European cities, such as Berlin and London,[citation needed] commuter towns were founded in response to bomb damage sustained during World War II. Residents were relocated to semi-rural areas within a 50-mile (80 km) radius, firstly because much inner city housing had been destroyed, and secondly in order to stimulate development away from cities as the industrial infrastructure shifted from rail to road. Around London, several towns – such as Basildon, Crawley, Harlow, and Stevenage – were built for this purpose by the Commission for New Towns.[citation needed]

In some cases, commuter towns can result from negative economic conditions. Steubenville, Ohio, for instance, had its own regional identity along with neighboring Weirton, West Virginia until the collapse of the steel industry in the 1980s. Combined with easier access to the much larger city of Pittsburgh via the Steubenville Pike and the Parkway West, Steubenville has shifted its marketing efforts to being a commuter town to Pittsburgh, as well as one with a lower cost of living in Ohio compared to tax-heavy Pennsylvania. In 2013, Jefferson County, Ohio (where Steubenville is located) was added to the Pittsburgh metropolitan area as part of its larger Combined Statistical Area.[3]

Where commuters are wealthier and small town housing markets weaker than city housing markets, the development of a bedroom community may raise local housing prices and attract upscale service businesses in a process akin to gentrification. Long-time residents may be displaced by new commuter residents due to rising house prices. This can also be influenced by zoning restrictions in urbanized areas that prevent the construction of suitably cheap housing closer to places of employment.

The number of commuter towns increased in the US and the UK during the 20th century because of a trend for people to move out of the cities into the surrounding green belt. Historically, commuter towns were developed by railway companies to create demand for their lines. One 1920s pioneer of this form of development was the Metropolitan Railway (now part of London Underground) which marketed its Metro-land developments. This initiative encouraged many to move out of central and inner-city London to suburbs such as Harrow and out of London itself, to commuter villages in Buckinghamshire or Hertfordshire.[citation needed] Commuter towns have more recently been built ahead of adequate transportation infrastructure, thus spurring the development of roads and public transportation systems. These can take the form of light rail lines extending from the city centre to new streetcar suburbs and new or expanded highways, whose construction and traffic can lead to the community becoming part of a larger conurbation.

In the United States, it is common for commuter towns to create disparities in municipal tax rates. When a commuter town collects few business taxes, residents must pay the brunt of the public operating budget in higher property or income taxes. Such municipalities may scramble to encourage commercial growth once an established residential base has been reached.

A 2014 study by the British Office for National Statistics found that commuting also affects wellbeing. Commuters are more likely to be anxious, dissatisfied and have the sense that their daily activities lack meaning than those who don't have to travel to work even if they are paid more.[4]

In Belgium, the development of traditional rural Flemish towns surrounding Brussels into commuter towns is causing major language tensions, as most of the newcoming commuters are French-speaking or even international English-speaking families with no attachment to the Flemish roots. The Flemish movement in the Brussels-Halle-Vilvoorde area, with demands such as the strict enforcement of the Dutch language (restaurants with bilingual menus have been assaulted by activists, etc.)

The term "exurb" was also used in the United States and elsewhere, starting in 1955 for a commuter town, as the word exurb ( a portmanteau of "extra & urban") was coined by Auguste Comte Spectorsky, in his 1955 book The Exurbanites, to describe the ring of prosperous communities beyond the suburbs that are commuter towns for an urban area.[5] However, especially since a landmark report by the Brookings Institution in 2006, the term is generally used for areas beyond suburbs and specifically less densely built than the suburbs to which the exurbs' residents commute.[6]

Exurbs vary in wealth and education level. In the United States, exurban areas typically have much higher college education levels than closer-in suburbs, though this is not necessarily the case in other countries. They also typically have average incomes much higher than nearby rural counties, and some have some of the highest median household incomes in their respective metropolitan area. However, depending on local circumstances, some exurbs have higher poverty levels than suburbs nearer the city.

Commuters from early exurbs, such as the end of Philadelphia's Main Line and the Northern Westchester region of Westchester County, New York, reached the city center via commuter rail and parkway systems.

Today's exurbs are composed of small neighborhoods in otherwise lightly developed areas, towns, and (comparatively) small cities. Some lie in the outer suburbs of an urbanized area, but a few miles of rural, wooded, or agricultural land separates many exurbs from the suburbs. Exurbs may have originated independently of the major city to which many residents commute. Most consist almost exclusively of commuters and lack the historical and cultural traditions of more established cities. Many early 20th century exurbs were organized on the principles of the garden city movement.

Yesterday's sprawling exurbs, such as Forest Hills and Garden City, New York, often become a later decade's suburbs, surrounded and absorbed into a belt of infill.

Many suburbs within a metropolitan city proper enjoyed their greatest growth in the post-World War II period, after which growth slowed for several decades; however, since the 1990s extensive development has occurred outside of cities. There have also been significant growth differences between inside and outside metro boundaries; many developments typical of exurbs, such as the proliferation of big box retailers, lie just on the outside, due to older suburbs' being restricted by inner-city land-use politics while communities outside are free to develop and grow.

"They begin as embryonic subdivisions of a few hundred homes at the far edge of beyond, surrounded by scrub. Then, they grow – first gradually, but soon with explosive force – attracting stores, creating jobs and struggling to keep pace with the need for more schools, more roads, more everything. And eventually, when no more land is available and home prices have skyrocketed, the whole cycle starts again, another 15 minutes down the turnpike."

Others argue that exurban environments, such as those that have emerged in Oregon over the last 40 years as a result of the state's unique land use laws, have helped to protect local agriculture and local businesses by creating strict urban growth boundaries that encourage greater population densities in centralized towns, while slowing or greatly reducing urban and suburban sprawl into agricultural, timber land, and natural areas.[8]