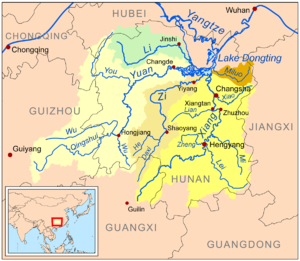 Map showing Lake Dongting and the major rivers flowing into it

Dongting Lake (Chinese: 洞庭湖) is a large, shallow lake in Northeastern Hunan Province, China. It is a flood basin of the Yangtze River, so its volume depends on the season. The provinces of Hubei and Hunan are named after their location relative to the lake: Hubei means "North of the Lake" and Hunan, "South of the Lake".[2]

Dongting Lake is famous in Chinese culture as the place of origin of dragon boat racing. It is the site of Junshan Island and is home to the finless porpoise, an endangered species.[2] 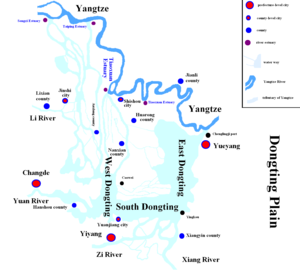 In the July–September period, flood water from the Yangtze flows into the lake, enlarging it greatly. The lake's area, which normally is 2,820 square kilometers or 1,090 square miles (data before 1998), may increase to 20,000 square kilometers (7,700 sq mi) in flood season, when vast amounts of water and sediment from the Chang Jiang flow into the lake. The lake is also fed by four major rivers: the Xiang, Zi, Yuan and Li rivers. Small rivers also flow in, the most famous one being Miluo River where poet Qu Yuan committed suicide. In addition, the Xiao River flows into the Xiang near Yongzhou, before the Xiang flows into the lake. Ocean-going vessels can travel through the Xiang to reach Changsha.[3]

The earliest rice paddies yet discovered in the world were in the Liyang plain, which was then on the western edge of Dongting lake.[4] The state of Chu occupied the region in the Eastern Zhou period, and its territory there was taken over by Qin in the 3rd century BCE. During the Han Dynasty, Yunmeng Marsh (雲夢大澤; Yúnmèng dàzé literally "Great Marsh of Cloud Dream"), which lies to the north of Dongting Lake in Hubei Province, served as the main flood-basin of the Yangtze. The rich sediment of the marsh attracted farmers. Embankments were built, keeping the river out, and the Dongting Lake area south of the Yangtze gradually became the river's main flood-basin. The Han state was actively involved in the colonization of the region, maintaining dikes in Liyang to protect farmland from flooding.[5]

At that time, Dongting Lake was China's largest freshwater lake. Because of its size, it gained the name Eight-hundred-li-Dongting (八百里洞庭). Nowadays, it is the second-largest, after Poyang Lake, as much of the lake has been turned into farmland.[6][7]

The area is well known in Chinese history and literature. "Dongting" literally means "Grotto Court", and the lake was named for the huge hall or cavern, which was believed to exist beneath the lake, where the spirits of the Sage-King Shun's wives Ehuang and Nüying were said to be the rulers of this grotto, which was claimed to have underground passages opening to all parts of the empire.[8][9] Dragon boat racing is said to have begun on the eastern shores of Dongting Lake as a search for the body of Qu Yuan, the Chu poet (340–278 BC), and a dragon-king is said to live at the bottom of the lake.

Junshan was also named after the goddess-wives of Shun, who lived there after his death by drowning, while they mourned him and sought for his body all the way from the source of the Xiang River, in which he drowned, and then on down to where it could have drifted, into the lake.[10] Junshan Island, formerly a Daoist retreat, is a famous one-kilometer island with 72 peaks in the middle of the lake. The island is also famous for its Junshan Yinzhen tea.[11] The basin of Dongting Lake and its surrounding area is famous for its scenic beauty, which has been encapsulated in the phrase "Hunan of the Xiao and Xiang rivers" (潇湘湖南; Xiāo-Xiāng Húnán).[citation needed]

The scenery of the Jiuyi Mountains and of the Xiao and Xiang rivers below is often mentioned in Chinese poetry. The late Tang Dynasty poet Yu Wuling is supposed to have been fond of the scenery of Dongting Lake.[12] During the Song Dynasty, it became the fashion to paint this region's scenery in a set of eight scenes, usually entitled as Eight Views of Xiaoxiang. It is also said that Han Shizhong settled in the region after retired from military service. The fashion spread to Japan, where eventually other famous places were substituted for the Xiao and Xiang rivers.[citation needed] One of the famous ponds based on the geography of the lake is at the Daikaku-ji in Kyoto.

The agricultural colonization of the region began in ancient times, and by the 19th century much of the lake's shallower areas had been destroyed to create farmland.[13] After 1949 a new round of wetland drainage destroyed much of what remained, leaving only a fraction of the original wetland intact, though some of that area has subsequently been returned to wetland conditions. Nonetheless, along with Poyang Lake, it remains one of the largest lakes in China, and is an important wintering area for migratory birds. It has been designated as a protected Ramsar site since 1992.[1]

In 2007 fears were expressed that China's finless porpoise, a native of the lake, might follow the baiji, the Yangtze river dolphin, into extinction. There have been calls for action to save the finless porpoise, of which there are about 1400 left living, with approximately 700 to 900 in the Yangtze, and approximately another 500 in Poyang and Dongting Lakes. The 2007 population levels were less than half the 1997 levels, and the population continues to drop at a rate of 7.3 per cent per year. Pressure on the finless porpoise population on Poyang Lake comes from the high numbers of ships passing through, as well as sand dredging.[14]

After flooding of the Yangtze River in late June 2007, approximately 2 billion mice were displaced from the islands of the lake. The mice invaded surrounding communities, damaging crops and dikes and forcing the government to construct walls and ditches to control the population.[15]

The lake was also featured on news services as having a problem with schistosoma and malaria infected mosquitoes.[citation needed]

Billions of mice were forced from their holes and were sent scurrying into local villages when officials opened the sluice gates on Dongting Lake in June 2007 to relieve flooding. Villagers killed an estimated 2 billion mice by beating them with shovels or using poison. The rotting mouse corpses should have been properly disposed of, and other animals—such as cats and dogs—were the unintended victims of the poisons.[citation needed]

A restoration project, the Sino-Norwegian Project of Biodiversity Protection Management, began in 2005. According to a 2007 article in the China Daily, "[The Dongting Lake area] will be restored to a sustainable biodiversity environment within five to 10 years".[16]

Major cities on the lake