As a handsome, debonair leading man in 40 films over the next 14 years, he was a popular star in comedies, dramas, and musicals. In the 1950s he worked on Broadway and in television, and was the host of NBC's International Showtime from 1961 to 1965. Returning to film work in his later years, Ameche enjoyed a fruitful revival of his career beginning with his role as a villain in Trading Places (1983) and won the Academy Award for Best Supporting Actor for his performance in Cocoon (1985).

Don Ameche was born as Dominic Felix Amici on May 31, 1908, in Kenosha, Wisconsin. His father, Felice Amici, was a bartender from Montemonaco, Ascoli Piceno, Marche, Italy. His mother, Barbara Etta Hertel, was of Scottish, Irish, and German ancestry.[4][5][6] He had three brothers, Umberto (Bert), James (Jim Ameche), and Louis, and four sisters, Elizabeth, Catherine, Mary and Anna.[7][8] Ameche attended Marquette University, Loras College, and the University of Wisconsin–Madison, where his cousin Alan Ameche played football and won the Heisman Trophy in 1954.[9] Ameche had intended to study law, but he found theater more interesting and decided on a stage career. 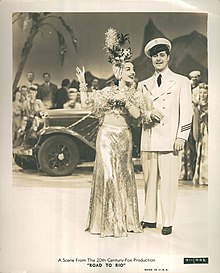 Ameche and Carmen Miranda in That Night in Rio (1941)

Ameche had done well in college dramatics at Marquette University, and when a lead actor for a stock company production of Excess Baggage did not turn up, a friend persuaded him to stand in for the missing actor. He enjoyed the experience and got a juvenile lead in Jerry For Short in New York, followed by a tour in vaudeville with Texas Guinan until she dropped him from the act, dismissing him as "too stiff".[10]

Ameche made his film debut in 1935, with an uncredited bit in Dante's Inferno (1935) produced by Fox Corporation. Fox then turned into 20th Century Fox who put Ameche under long term contract.

Ameche graduated to leading roles relatively quickly appearing in Sins of Man (1936) playing the son of Jean Hersholt. He was Loretta Young's leading man in Ramona (1936), the studio's first film in color.

Ameche was reunited with Young in Ladies in Love (1936) and he supported Sonja Henie in One in a Million (1936).

In Love Is News (1937) Ameche was teamed with Young and Tyrone Power. He was top billed in Fifty Roads to Town (1937) with Ann Sothern then made You Can't Have Everything (1937) with Alice Faye and The Ritz Brothers.

Ameche was reunited with Henie in Happy Landing (1938) and made Josette (1938) with Simone Simon and Robert Young, and Gateway (1938) with Arleen Whelan.

He played D'Artagnan in The Three Musketeers (1939) alongside the Ritz Brothers. He went to Paramount to play Claudette Colbert's leading man in Midnight (1939).

The Story of Alexander Graham Bell

Back at Fox Ameche played the title character in The Story of Alexander Graham Bell (1939). It led to the use of the word, "ameche", as slang for telephone in common catchphrases, as noted by Mike Kilen in the Iowa City Gazette (December 8, 1993): "The film prompted a generation to call people to the telephone with the phrase: 'You're wanted on the Ameche.'"[11] In the 1940 film Go West, Groucho Marx proclaims, "Telephone? This is 1870, Don Ameche hasn't invented the telephone yet." While in the 1941 film Ball of Fire, Barbara Stanwyck's character discusses the "ameche" slang usage, "Do you know what this means: I'll get you on the Ameche."

Ameche made That Night in Rio (1941) with Faye and Miranda and Moon Over Miami (1941) with Grable and Robert Cummings. He did some straight comedies: Kiss the Boys Goodbye (1941) with Mary Martin, and The Feminine Touch (1941) at MGM with Rosalind Russell.

Ameche starred with Gene Tierney in Ernst Lubitsch's Heaven Can Wait in 1943, a film nominated for the Academy Award for Best Picture. 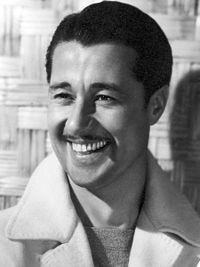 Ameche played so many roles based on real people that on one of his radio broadcasts, Fred Allen joked, "Pretty soon, Don Ameche will be playing Don Ameche." Soon afterwards, in It's in the Bag! (1945), which starred Allen, Ameche indeed played himself in a bit part.

Ameche was a major radio entertainer, heard on such shows as Empire Builders, The First Nighter Program, Family Theater, and the Betty and Bob soap opera. Following his appearances as announcer and sketch participant on The Edgar Bergen/Charlie McCarthy Show, he achieved memorable success during the late 1940s playing opposite Frances Langford in The Bickersons, the Philip Rapp radio comedy series about a combative married couple. It began on NBC in 1946, moving to CBS the following year. He also had his own program, The Old Gold Don Ameche Show, on NBC Red in the early 1940s.[14]

Ameche's most recent films had not been successful. He began appearing on television on shows such as The Chevrolet Tele-Theatre and Family Theatre .

He co-hosted The Frances Langford-Don Ameche Show (1951–52). Ameche's one feature film in the 1950s was Phantom Caravan (1954). He concentrated on stage or TV: Fire One (1954), a TV adaptation of High Button Shoes (1956), Goodyear Playhouse, a musical adaptation of Junior Miss for The DuPont Show of the Month, and Climax!.

Ameche starred in Silk Stockings (1955–56) on Broadway, which ran for 478 performances. Holiday for Lovers (1957) ran for 100 performances. Both were turned into films but Ameche did not reprise his stage performance. He was in Goldilocks (1958–59) which went for 161 performances.

Ameche as the host of International Showtime in 1962

Ameche's best-known television role came between 1961 and 1965, when he traveled throughout Europe with a television videotape unit and camera crew to cover a different European resident circus or ice show that was taped for presentation on a weekly series titled International Showtime on NBC television. Ameche was present at each circus or ice show taped for the series, and was seen as host and commentator. His "anchor position" was in the grandstands at the particular show being taped. Sometimes, when one of the star acts of a particular show spoke English, Ameche would interview him or her and the interview would appear during the program.

He also guest featured in many television series, including NBC's The Polly Bergen Show and ABC's The Pat Boone Chevy Showroom, Burke's Law, The Christophers.

Ameche made a horror movie Picture Mommy Dead (1966) and a TV film Shadow Over Elveron (1968). In between he returned to Broadway for Henry, Sweet Henry (1967) which ran for 80 performances.

He was also a frequent panelist on the 1950s version of To Tell The Truth, often alternating with his future Trading Places co-star, Ralph Bellamy.

After the release of two 1970 comedies, Disney's The Boatniks and the wartime farce Suppose They Gave a War and Nobody Came, Ameche was absent from theatrical movies for the next 13 years. His only appearance in cinema during that time was in F For Fake (1975), Orson Welles' documentary on hoaxes, when 20th Century-Fox mistakenly sent Welles newsreel footage of Ameche misidentified as footage of Howard Hughes.

Ameche also appeared in an early episode of Columbo entitled "Suitable for Framing" (1971). He did a TV movie Shepherd's Flock (1971) and episodes of Ellery Queen, Good Heavens, McCloud, Quincy M.E., The Love Boat, and Fantasy Island. He was in an unsold TV pilot, The Chinese Typewriter (1979).

Ameche and fellow veteran actor Ralph Bellamy were eventually cast in John Landis' Trading Places in 1983, playing rich brothers intent on ruining an innocent man for the sake of a one-dollar bet. In an interview some years later on Larry King Live, co-star Jamie Lee Curtis said that Ameche, a proper old-school actor, went to everyone on the set ahead of time to apologize when he was called to start cursing in the film. The film's success and their comedic performances brought them both back into the Hollywood limelight.

Ameche starred in a TV sitcom pilot with Katherine Helmond, Not in Front of the Kids (1984). He did a pilot for a TV show, Fathers and Other Strangers.

Ameche's next role, in Cocoon (1985), won him an Academy Award for Best Supporting Actor. He continued working for the rest of his life, including in the sequel, Cocoon: The Return.

Ameche was teamed with Bob Hope in A Masterpiece of Murder (1986) and George C. Scott in Pals (1987). He had a lead role in Harry and the Hendersons (1987) and he and Bellamy reprised their Trading Places roles with a cameo in Coming to America (1988).

He earned good reviews for the David Mamet and Shel Silverstein-penned Things Change (1988); the New York Times said that he showed "...the kind of great comic aplomb that wins actors awards for other than sentimental reasons."[15]

He returned to Broadway to appear in a revival of Our Town in 1989.

In 1990, Ameche appeared in an episode of The Golden Girls as Rose Nylund's father. He made a film with Burgess Meredith, Oddball Hall (1990) and did another for John Landis, Oscar (1991).

He did a pilot that was not picked up, Our Shining Moment (1991), an episode of Pros and Cons and the TV movie 209 Hamilton Drive. He co starred with Tom Selleck in Folks! (1992) and supported Jane Seymour in Sunstroke (1992).

His last films were Homeward Bound: The Incredible Journey (1993) and Corrina, Corrina (1994), completed only days before his death.

Despite his advancing age, Ameche remained busy. He had credited roles in a feature film every year for the last decade of his life except 1986 (although he starred in the TV movie A Masterpiece of Murder with Bob Hope that year) and attributed his continued productivity to an active lifestyle, which included regular six-mile walks. He said in a 1988 interview, "How many actors in their 20s and 30s do you know that have two pictures being released by major studios in one year?" (referring to Cocoon and Things Change).

From 1946 to 1949, Ameche, with other Los Angeles entertainment figures including Bing Crosby and Bob Hope, was a co-owner of the Los Angeles Dons of the All-America Football Conference, a rival to the National Football League.[16] He was instrumental in forming and leading the ownership group the year before play began[17] and initially served as team president.[18]

Ameche was married to Honore Prendergast from 1932 until her death in 1986.[19] They had six children.[19][20] One, Ron Ameche, owned a restaurant, "Ameche's Pumpernickel" in Coralville, Iowa. He had two daughters, Connie and Bonnie. Ameche's younger brother, Jim Ameche, also a well-known actor, died in 1983 at the age of 67.[21] His brother Bert was an architect who worked for the U.S. Navy in Port Hueneme, California, and then the U.S. Postal Service in Los Angeles, California.

On December 6, 1993, Ameche died at his son Don, Jr.'s house in Scottsdale, Arizona of prostate cancer[25] at age 85. He was cremated and his ashes are buried at Resurrection Catholic Cemetery in Asbury, Iowa.[26]

In the 1941 Merrie Melodies cartoon Hollywood Steps Out by Warner Bros, Don Ameche appears with several other famed stars in Ciro's nightclub. In the 1995 The Simpsons (season 7) episode 12, "Team Homer", Haing S. Ngor's Best Supporting Actor Oscar (for his role in the movie The Killing Fields) had appeared with Ngor's name being crossed out and replaced with Homer's name. About a month after "Team Homer" aired in 1996, Ngor was murdered just outside his home in Los Angeles. Animators changed the Oscar in question to that of Don Ameche in subsequent reruns.