Dominick Rojelio Cruz (born September 3, 1985)[4] is an American professional mixed martial artist, who is currently signed to the Ultimate Fighting Championship (UFC). He is a two-time UFC Bantamweight Champion and was also the final bantamweight titleholder of World Extreme Cagefighting (WEC). As of August 25, 2020, he is #11 in the UFC bantamweight rankings.[5]

Cruz is noted for his unorthodox movement, powerful wrestling base, quick striking, and his tendency to attack from angles in a unique fashion unlike any other fighter on the UFC roster.[6] He won the WEC bantamweight title in March 2010, and won the inaugural UFC Bantamweight Championship the following December. After defending the belt twice in 2011, Cruz was sidelined by injuries in 2012 and subsequently stripped of the title in 2014. On January 17, 2016, he regained the bantamweight championship with a split-decision win over T.J. Dillashaw. Numerous media outlets called this victory the greatest comeback story in MMA history.[7][8]

Cruz was born on September 3, 1985, in San Diego, California, and is of Mexican descent.[9] He lived with his single mother, grandmother, and brother in a trailer park in Tucson for most of his childhood. He started wrestling in seventh grade and competed all through high school out of Flowing Wells High School.[10][11] After an injury that came in his senior year, he lost the opportunity of receiving a scholarship to wrestle at the University of Northern Colorado.[12]

Cruz worked as a customer service representative at Lowe's, and was studying to be a firefighter at community college before becoming a full-time fighter.[13]

In addition to fighting, Cruz is an MMA analyst for ESPN.

Cruz began his professional mixed martial arts (MMA) career in 2005, competing in the Rage in the Cage and Total Combat organizations. He amassed a record of 9-0 before joining World Extreme Cagefighting (WEC).[14]

His first fight in the WEC was at featherweight in a title fight against Urijah Faber in which he lost by guillotine choke in the first round. The fight would become the beginning of a longstanding cantankerous rivalry between the two. 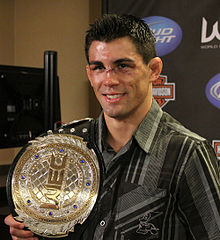 He would then make his debut for the WEC's 135 lb bantamweight division on June 7, 2008, at WEC 34 defeating Charlie Valencia by unanimous decision.

Cruz defeated Joseph Benavidez on August 9, 2009, at WEC 42 by unanimous decision. Both participants were awarded Fight of the Night honors.[15]

Cruz defeated Brian Bowles via TKO (doctor stoppage) on March 6, 2010, at WEC 47. Bowles was unable to continue after the second round after breaking his hand. Cruz became the new WEC Bantamweight Champion.[16]

Cruz made his first title defense against Joseph Benavidez on August 18, 2010, at WEC 50.[17] Cruz broke his left hand in the fight.[18] The bout was a rematch of their contest at WEC 42, in which Cruz handed Benavidez his first career loss, via decision. Cruz would later defeat Benavidez again via split decision.

On October 28, 2010, World Extreme Cagefighting merged with the Ultimate Fighting Championship (UFC). As part of the merger, all WEC fighters were transferred to the UFC.[22]

A rematch with Urijah Faber took place on July 2, 2011, at UFC 132 being the first defense of the new UFC Bantamweight title.[23] In a closely contested fight which saw Faber drop Cruz multiple times with strikes and Cruz landing multiple leg\body kicks, knees and takedowns, Cruz defeated Faber via unanimous decision to retain his championship and avenge the only loss on his record at that time.[24][25]

Cruz defeated Demetrious Johnson via unanimous decision on October 1, 2011, at UFC on Versus 6, his second UFC title defense. Cruz's walk-out music is "Cruisin'," by Huey Lewis of Huey Lewis and the News and Gwyneth Paltrow. Cruz broke his right hand in the first round.[18][26] Cruz was expected to face Urijah Faber for a third time for the UFC bantamweight championship after Faber defeated Brian Bowles at UFC 139 in a bantamweight title eliminator bout.[27]

On December 3, 2012, it was revealed that Cruz underwent another ACL surgery after his body rejected one from a cadaver, with an expected recovery time of six to nine months.[31]

After nearly three years away from the sport due to injuries, Cruz returned to the octagon on September 27, 2014, at UFC 178 where he faced Takeya Mizugaki.[34] Cruz won the fight by KO in the first round by punches after getting a takedown.[35] The win also earned Cruz his first Performance of the Night bonus award.[36] At the post-fight press conference, Dana White confirmed that Cruz's next fight would be for the Bantamweight Championship against T.J. Dillashaw.

After over four years since his last title fight, Cruz faced T.J. Dillashaw on January 17, 2016, at UFC Fight Night 81. He regained the title with a split-decision victory.[38] Both participants were awarded Fight of the Night honors.[39] Many have cited the return and victory as one of the greatest comebacks in MMA history.[7][8]

To complete their trilogy, Cruz defended his title against Urijah Faber on June 4, 2016, at UFC 199. He won the fight by unanimous decision.[40]

Cruz faced Cody Garbrandt on December 30, 2016, at UFC 207. Garbrandt won the bout by unanimous decision to become the new UFC Bantamweight Champion.[41] This was the first loss for Cruz in nearly 10 years.[42] Months later, on The Joe Rogan Experience, Cruz revealed that he was plagued by plantar fascia tendinitis throughout training camp that made it difficult for him to walk at times.[43]

Cruz was expected to face Jimmie Rivera on December 30, 2017, at UFC 219, however, on November 8, it was reported Cruz suffered a broken arm and he was forced to pull from the card.[44]

Cruz was expected to face John Lineker on January 26, 2019 at UFC 233.[45] It was reported on December 11, 2018 that Cruz injured his shoulder and pulled out of the fight.[46] Subsequently, Cruz indicated that he expects to be out of competition for another year.[47]

After more than a 3 year-layoff, Cruz replaced José Aldo and faced Henry Cejudo for the UFC Bantamweight Championship on May 9, 2020 at UFC 249.[48] Cruz lost via TKO in the second round.[49]

Cruz combines constant lateral motion with precise, in-and-out striking.[6][50] Known as one of the most agile fighters in MMA, he is noted for his quick footwork, head movement, and use of feints. He often attacks with combinations, step-in jabs, and single strikes thrown from angles.[6][50] In addition to his striking, Cruz has extensive training in amateur wrestling.[11]