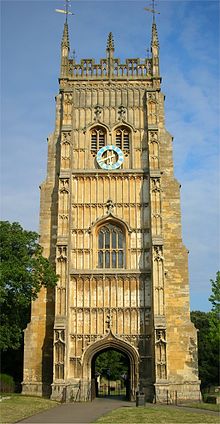 Dominic of Evesham was a medieval prior of Evesham Abbey in England and historical chronicler.

Little is known of his life.[1] He was probably a native Englishman,[2] and was probably born sometime before 1077, and was probably raised around the abbey.[1] He may have entered Evesham before 1077,[2] but certainly by 1104, he was a monk at Evesham, as his name appears in a document as a member of the abbey. Sometime before 1125 he became prior of Evesham, as he was named prior in an account of the consecration of Samson as Bishop of Worcester that year. He was still prior after 1130, when he witnessed two charters of Reginald Foliot, then the abbot. By 1145 he had been succeeded by Richard as prior, and no further records mention Dominic.[1]

Dominic certainly wrote four works: Vita Sancti Egwini, Vita Sancti Odulfi, Acta Proborum Virorum, and a collection of Miracles of the Virgin. The Vita Sancti Egwini, or Life of Saint Egwin, was a history of Evesham's founder, St Egwin,[1] and consists of two books.[3] This work became the standard source for Egwin's life in the later Middle Ages, replacing an earlier Life written by Byrhtferth which had been Dominic's source for his first book.[4] The Vita Sancti Odulfi gave a hagiography of St Odulf, a missionary to Brabant whose relics were enshrined at Evesham. The Acta Proborum Virorum was a miscellaneous compilation of tales and legends relating to Evesham Abbey.[1] The work on the Virgin's miracles is one of the earliest such works.[2] The source for his authoring these works is a 13th-century manuscript, which is an early collection of some of the works. However, the compiler, Thomas of Marlborough, admitted that he had altered both by omitting information and adding information.[5]

The monastic historian David Knowles felt that the account of Abbot Æthelwig's death that is contained in the Chronicon Abbatiae de Evesham was written by Dominic, not by the main author of the chronicle, Thomas of Marlborough.[6] Another possible work was a Vita Sancti Wistani (or Life of Saint Wistan), about St Wistan, a Mercian saint whose relics rested at Evesham.[1]

The main manuscripts containing Dominic's works are Bodely MS Rawlinson A.287, Hereford Cathedral Chained Library MS P.7.vi, Balliol MS 240.[7] The Dublin manuscript only has the first book, while the Hereford manuscript contains both books.[3] The account of the death of Æthelwig along with the Vitas and the Acta were published in 1863 in the Rolls Series number 29, edited by William Dunn Macray.[7][8] The Vita Sancti Egwini, edited by Michael Lapidge, has been published in the journal Analecta Bollandiana, which is devoted to the study of hagiography.[9]