Dominic A. LeBlanc PC QC MP (born December 14, 1967), is a Canadian lawyer and politician. He has been the member of parliament for the New Brunswick riding of Beauséjour since 2000, has served as Minister of Intergovernmental Affairs since August 2020, as well as President of the Queen's Privy Council for Canada since July 2018. LeBlanc is the son of former Member of Parliament, Senator and Governor General of Canada, Roméo LeBlanc.[2]

LeBlanc ran for the leadership of the Liberal Party in 2008 but dropped out of the race to endorse Michael Ignatieff, who was later acclaimed leader. With the resignation of Ignatieff after the 2011 federal election LeBlanc was considered a likely candidate in the race to succeed him as party leader, but did not run.[3][4]

LeBlanc was born in Ottawa, Ontario, to Roméo LeBlanc and Joslyn "Lyn" Carter. As a child, he baby-sat Justin, Alexandre, and Michel Trudeau, the children of then-Prime Minister Pierre Trudeau. He has remained friends with Justin Trudeau, with whom he is currently serving with in the House of Commons, and endorsed his candidacy for Liberal leader in 2012.[4]

Prior to being elected to the House of Commons, LeBlanc was a Barrister and Solicitor with Clark Drummie in Shediac and Moncton. From 1993–1996, LeBlanc was a Special Advisor to the Prime Minister Jean Chrétien. He is the son of the former Governor General of Canada, The Right Honourable Roméo LeBlanc, who had previously been the Member of Parliament for Westmorland-Kent from 1972 to 1984, and then a Senator from 1984 to 1994.[8]

LeBlanc is an Acadian.

LeBlanc is member of the Liberal Party of Canada in the House of Commons of Canada, representing the riding of Beauséjour in New Brunswick.

LeBlanc first ran in that riding in 1997,[9] losing to New Democratic Party candidate, Angela Vautour.[10] During that race there were accusations of political patronage as LeBlanc's father was the sitting viceroy, and there was criticism that the Governor General had a series of events planned in New Brunswick the very week that the Prime Minister dropped the election writs.[11][12][13][14]

During the Liberal Party's time in power LeBlanc served as Parliamentary Secretary to the Minister of National Defence, from January 13, 2003, to December 11, 2003, and was the chair of the Atlantic Caucus.

On July 10, 2004, he was sworn-in as a Member of the Privy Council for Canada and appointed Parliamentary Secretary to the Leader of the Government in the House of Commons and Deputy Chief Government Whip. He has served on the Special Committee on Non-Medical Use of Drugs, and the Standing Committees on Fisheries and Oceans, Transport and Government Operations, National Defence and Veterans Affairs, and Public Accounts, Procedures and House Affairs, and International Trade. 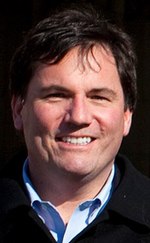 On October 27, 2008, LeBlanc was the first candidate to officially announce his intention to seek the leadership of the Liberal party to replace Stéphane Dion. Former leadership candidates Michael Ignatieff and Bob Rae came forward shortly after LeBlanc's announcement.[17] His supporters included top staffers in the prime minister's office under Jean Chrétien, such as his former chief of staff Percy Downe, and Tim Murphy, chief of staff under Paul Martin. Some senior organizers in Gerard Kennedy's 2006 leadership bid were also with LeBlanc.[18]

On December 8, 2008, LeBlanc announced he was dropping out of the leadership race because he felt a leader needed to be put in place as soon as possible and that he was throwing his support behind Ignatieff. The next day Rae dropped out of the race and Ignatieff was acclaimed leader when Dion stepped down.[19][20]

LeBlanc retained his seat in the 2011 election, while the Liberals dropped down to third place in the House of Commons.

Regarding the race for the leadership of the Liberal Party, LeBlanc, a prospective leadership candidate, puts it, the next leader needs to commit 10 to 15 years of his or her life "occupied exclusively" with rebuilding the Liberal party and winning elections.[21]

On November 4, 2015, he was appointed the Leader of the Government in the House of Commons in the present Cabinet, headed by Justin Trudeau.[22] On May 31, 2016, upon the resignation of Hunter Tootoo from the Ministry, LeBlanc also became the Minister of Fisheries, Oceans and the Canadian Coast Guard. His father had previously held the equivalent position under Prime Minister Pierre Trudeau.[23]

On August 19, 2016, Leblanc was replaced as Leader of the Government in the House of Commons by Bardish Chagger. He retained the post of Minister of Fisheries, Oceans and the Canadian Coast Guard.[5]

On September 12, 2018, Canada's Ethics Commissioner Mario Dion found LeBlanc broke conflict of interest rules when he awarded a lucrative Arctic surf clam licence to a company linked to his wife's cousin in February 2018.[25]

On April 26, 2019, Leblanc announced he would be stepping back from cabinet as he sought treatment for cancer.[26]

After the resignation of Bill Morneau as Minister of Finance, Leblanc again became Minister of Intergovernmental Affairs after his successor, Chrystia Freeland, took the role of Minister of Finance in a cabinet shuffle on August 18, 2020. He would retain his position as President of the Queen's Privy Council for Canada.[27]

In 2003, he married Jolène Richard, a former Moncton lawyer who became a judge on the Provincial Court of New Brunswick in 2008, and eventually became a chief judge.[32] She is the daughter of Guy A. Richard, who served as Chief Justice of the Court of Queen's Bench of New Brunswick.[33][34] He has an adult stepson.[34]

In December 2017, he announced that he had been diagnosed with chronic lymphocytic leukemia and would begin chemotherapy immediately while continuing to serve in his parliamentary roles.[34]