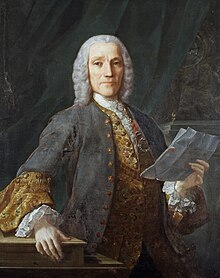 Domenico Scarlatti in a portrait by Domingo Antonio Velasco (1738)

Giuseppe Domenico Scarlatti, also known as Domingo or Doménico Scarlatti; (Naples 26 October 1685 – Madrid, 23 July 1757) was an Italian composer. He is classified primarily as a Baroque composer chronologically, although his music was influential in the development of the Classical style. Like his renowned father Alessandro Scarlatti, he composed in a variety of musical forms, although today he is known mainly for his 555 keyboard sonatas.[1] He spent much of his life in the service of the Portuguese and Spanish royal families.

Domenico Scarlatti was born in Naples, Kingdom of Naples, belonging to the Spanish Crown. He was born in 1685, the same year as Johann Sebastian Bach and George Frideric Handel.[2] Scarlatti was the sixth of ten children of the composer and teacher Alessandro Scarlatti. His older brother Pietro Filippo was also a musician.

Scarlatti first studied music under his father.[3] Other composers who may have been his early teachers include Gaetano Greco, Francesco Gasparini, and Bernardo Pasquini, all of whom may have influenced his musical style. Muzio Clementi brought Scarlatti's sonatas into the classical style by editing what is known to be its first publication.[4] He was appointed as composer and organist at the royal chapel in Naples in 1701. In 1703, he revised Carlo Francesco Pollarolo's opera Irene for performance at Naples. Soon afterward, his father sent him to Venice. After this, nothing is known of Scarlatti's life until 1709, when he went to Rome and entered the service of the exiled Polish queen Marie Casimire. It was in Rome that he met Thomas Roseingrave. Scarlatti was already an accomplished harpsichordist: there is a story of a trial of skill with George Frideric Handel at the palace of Cardinal Ottoboni in Rome where he was judged possibly superior to Handel on the harpsichord, although inferior on the organ. Scarlatti has been heralded as the "greatest Italian harpsichord composer of all time".[5] Later in life, Scarlatti was known to cross himself in veneration when speaking of Handel's skill. While in Rome, Scarlatti composed several operas for Queen Casimire's private theatre. He was Maestro di Cappella at St. Peter's from 1715 to 1719. In 1719 he traveled to London to direct his opera Narciso at the King's Theatre.

According to Vicente Bicchi, Papal Nuncio in Portugal at the time, Domenico Scarlatti arrived in Lisbon on 29 November 1719. There he taught music to the Portuguese princess Maria Magdalena Barbara. He left Lisbon on 28 January 1727 for Rome, where he married Maria Caterina Gentili on 6 May 1728. In 1729 he moved to Seville, staying for four years. In 1733 he went to Madrid as a music master to Princess Maria Barbara, who had married into the Spanish royal house. The Princess later became Queen of Spain. Scarlatti remained in the country for the remaining twenty-five years of his life and had five children there. After the death of his first wife in 1739, he married a Spaniard, Anastasia Maxarti Ximenes. Among his compositions during his time in Madrid were most of the 555 keyboard sonatas for which he is best known.

Scarlatti befriended the castrato singer Farinelli, a fellow Neapolitan also enjoying royal patronage in Madrid. The musicologist and harpsichordist Ralph Kirkpatrick commented that Farinelli's correspondence provides "most of the direct information about Scarlatti that has transmitted itself to our day". Domenico Scarlatti died in Madrid, at the age of 71. His residence on Calle Leganitos is designated with a historical plaque, and his descendants still live in Madrid. He was buried at a convent there, in Madrid, but his grave no longer exists.

Minor planet 6480 Scarlatti is named in his honour.[6]

Only a fraction of Scarlatti's compositions were published during his lifetime; Scarlatti himself seems to have overseen the publication in 1738 of the most famous collection, his 30 Essercizi ("Exercises"). These were well received throughout Europe, and were championed by the foremost English writer on music of the eighteenth century, Charles Burney.

Scarlatti's 555 keyboard sonatas are single movements, mostly in binary form, and some in early sonata form, and mostly written for the harpsichord or the earliest pianofortes. (There are four for organ, and a few for small instrumental group). Some of them display harmonic audacity in their use of discords, and also unconventional modulations to remote keys.

Other distinctive attributes of Scarlatti's style are the following:

Kirkpatrick produced an edition of the sonatas in 1953, and the numbering from this edition is now nearly always used – the Kk. or K. number. Previously, the numbering commonly used was from the 1906 edition compiled by the Neapolitan pianist Alessandro Longo (L. numbers). Kirkpatrick's numbering is chronological, while Longo's ordering is a result of his arbitrarily grouping the sonatas into "suites". In 1967 the Italian musicologist Giorgio Pestelli published a revised catalog (using P. numbers), which corrected what he considered to be some anachronisms.[9] Although the exact dates of composition for these surviving sonatas are not known, Kirkpatrick concludes that they may all have been composed late in Scarlatti's career (after 1735), with the majority perhaps dating from after the composer's sixty-seventh birthday.[10][11]

Aside from his many sonatas, Scarlatti composed a number of operas and cantatas, symphonias, and liturgical pieces. Well-known works include the Stabat Mater of 1715 and the Salve Regina of 1757, which is thought to be his last composition.