Dominic Mintoff, KUOM (Maltese: Duminku Mintoff; often called il-Perit, "the Architect"; 6 August 1916 – 20 August 2012)[1] was a Maltese Socialist politician, architect, anti-colonialist revolutionary, and civil engineer who was leader of the Labour Party from 1949 to 1984, and was 8th Prime Minister of Malta from 1955 to 1958, when Malta was still a British colony, and again, following independence, from 1971 to 1984.[2] His tenure as Prime Minister saw the creation of a comprehensive welfare state, nationalisation of large corporations, a substantial increase in the general standard of living and the establishment of the Maltese republic,[3][4][5] but was later on marred by a stagnant economy, a rise in authoritarianism and outbreaks of political violence.[6][7][8][9]

Mintoff was born on 6 August 1916, and was baptised in his hometown Bormla.[10] His father was a naval cook and his mother a money lender.[11] He attended a seminary before enrolling at the University of Malta. He graduated with a Bachelor of Science and, later, as an architect and civil engineer (1937). That same year he received a Rhodes Scholarship and pursued his studies at Hertford College, Oxford, where he received a Masters in Science and Engineering in 1939.[11]

After a brief stint as an official of the Bormla Labour Party club, Mintoff was Labour's Secretary General between 1935 and 1945 (resigning briefly to pursue his studies abroad). He was first elected to public office in 1945 to the Government Council. In the same year, Mintoff was elected Deputy Leader of the Party with a wide margin that placed him in an indisputable position as the successor, if not a challenger, to party leader Paul Boffa. After Labour's victory at the polls in 1947, Mintoff was appointed Deputy Prime Minister and Minister of Public Works and Reconstruction, overseeing large post-War public projects.[7]

Mintoff's strong position and ambition led to a series of Cabinet crises. A split in the Labour Party came about when Boffa, who was ready for compromise and moderation with the colonial authorities, resigned and formed the Malta Workers Party and Mintoff refounded the Labour Party as the "Malta Labour Party" of which he assumed leadership. The split resulted in the weakening of both parties and it was not until 1955 after remaining out of government for three consecutive legislatures, that the Labour Party was elected to office with Mintoff as Prime Minister. This government's main political platform – integration with the UK – led to a deterioration of the Party's relations with the Catholic Church, leading to interdiction by the Church which resulted in voting Labour being declared a mortal sin leading all who defied the Church to be informally known as "Suldati tal-Azzar" (Soldiers of Steel). The Labour Party lost the subsequent two elections in 1962 and 1966 and boycotted the Independence celebrations in 1964 due to disagreements with the Independence agreements which still gave a good amount of power to the British Government.[5]

Following the lift of the interdiction in 1964, and the improvement of relationship with the Catholic Church in 1969, Dom Mintoff was elected as Prime Minister when Labour won the 1971 general election and immediately set out to re-negotiate the post-Independence military and financial agreements with the United Kingdom. The government also undertook socialist-style nationalization programmes, often in breach of property rights,[9] import substitution schemes, and the expansion of the public sector and the welfare state. Employment laws were revised with gender equality being introduced in salary pay. In the case of civil law, civil (non-religious) marriage was introduced and sodomy, homosexuality and adultery were decriminalised. Through a package of constitutional reforms agreed to with the opposition party, Malta declared itself a republic in 1974.[12] In 1979, the last of the British Naval Troops left Malta.

Social and political troubles in the 1980s

The Labour Party was confirmed in office in the 1976 elections. In 1981, amid allegations of gerrymandering, the Party managed to hold on to a parliamentary majority, even though the opposition Nationalist Party managed an absolute majority of votes.[13] A serious political crisis ensued when Nationalist MPs refused to accept the electoral result and also refused to take their seats in parliament for the first years of the legislature. Mintoff called this action "perverse" but it was not an uncommon one in any parliamentary democracy with disputed election results. He proposed to his parliamentary group that fresh elections be held,[citation needed] but most members of his Parliamentary group rejected his proposal.[citation needed] Mintoff stayed on as prime minister until 1984, during which time he suspended the Constitutional Court.[14] He resigned as Prime Minister and Party leader aged 68 in 1984 (although he retained his parliamentary seat), opening the way for his deputy prime minister Karmenu Mifsud Bonnici to succeed him.[13]

For the 1981 elections, the opposition Nationalist Party, reinvigorated with a new leader, looked set for a serious challenge to Mintoff. In fact, in that election, the Partit Nazzjonalista managed an absolute majority of votes, but managed only 31 seats to the Malta Labour Party's 34. Mintoff said that he would not be ready to govern in such conditions and hinted that he would call for fresh elections within six months. However, pressure from party members forced Mintoff to do otherwise: Mintoff eventually accepted the President's invitation to form a government. This led to a political crisis whose effects continued through much of the 1980s characterised by mass civil disobedience and protests led by Opposition Leader Eddie Fenech Adami as well as increasing political violence in the street as a result such as the Black Monday incident.[citation needed]

Mintoff resigned as Prime Minister and Leader of the Labour Party in 1984, while retaining his Parliamentary seat and remaining a government backbencher. He was succeeded by Karmenu Mifsud Bonnici. Mintoff was instrumental in convincing his parliamentary colleagues to support constitutional amendments ensuring a parliamentary majority for the party achieving an absolute majority of votes. A repeat of 1981 was thus avoided, and the Partit Nazzjonalista went on to win the 1987 elections. The Labour Party went into opposition for the first time in sixteen years. He successfully contested the 1987 and 1996 elections. However, there was a growing rift between Mintoff, seen as Old Labour, and Alfred Sant, the new Labour Leader. Things came to a head in 1998 when the Labour government was negotiating the lease of sealine to be developed in a yacht marina in Birgu. Mintoff eventually voted against the government's motion which was defeated. The Prime Minister saw this as a loss of confidence and The President, acting on Prime Minister Sant's advice dissolved Parliament and elections were held. This was the first time, since the war, that Mintoff's name was not on the ballot paper and the Malta Labour Party lost heavily. [15]

After Mintoff's initial attempts at integration with Great Britain proved unsuccessful he resigned in 1958 and became a strident advocate of decolonisation and independence.[16] Returning to office in 1971, he immediately set about renegotiating Malta's defence agreement with Britain.[16] The difficult negotiations with Britain, which later resulted in the departure of British forces in 1979 and the attendant losses in rent, were coupled with a policy of Cold War brinkmanship which saw Mintoff seek to play rivals off each other and look increasingly east and south, courting Mao Zedong, Kim Il-sung, Nicolae Ceaușescu and Muammar Gaddafi.[11]

Recently declassified CIA reports show US fears that a Mintoff-led government in Malta could see the country fall under the Soviet sphere of influence. The reports also show that the US was planning to rig the Maltese election in favour of the opposition in order to bring down Mintoff's government.[17]

Mintoff opposed Malta's EU and eurozone membership on the concern for Malta's status as a constitutionally neutral country.[18]

After his retirement from parliamentary politics, Mintoff's involvement in public life was only occasional. He made some appearances in the referendum campaign on Malta's membership to the EU and, with Alfred Sant being replaced in 2008, some rapprochement with Labour was made.[citation needed]

On 22 November 1947, Mintoff married Moyra de Vere Bentinck (12 July 1917 – 16 December 1997)[19][20][21][22][23] The couple got married at the parish church of Bir id-Deheb, Our Lady of Mercy, in Żejtun.[24] He met her during his studies in Oxford. The couple had two daughters, Anne and Yana. Yana, a member of the Socialist Workers Party, acquired brief notoriety in 1978 when she bombed the chamber of the UK House of Commons with manure in a protest against the British military presence in Northern Ireland.[13] 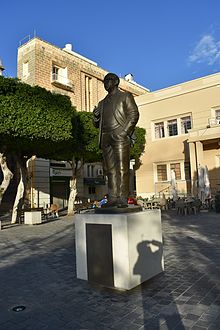 Monument of Dom Mintoff in Cospicua

While generations of loyal supporters continue to credit Mintoff with the introduction of social benefits like the children's allowance, two-thirds pensions, minimum wage and social housing as well as the creation of Air Malta, Sea Malta, the separation of church and state and ending 200 years of British Colonial rule, critics point to his divisive legacy and the violence and unrest that characterised his time in office. It has also been pointed out by Mintoff's critics that a pervasive cult of personality has been maintained after his death, most prominently within the Labour Party.

A statue of Mintoff was unveiled in his hometown Cospicua on 12 December 2014. The monument was designed by the artist Noel Galea Bason.[30]

In 2013, the main square in front the church of Our Lady of Mercy in Bir id-Deheb, Żejtun was renamed Dom Mintoff Square.

In August 2017, a project was launched to convert a large green area in the town of Paola into a park called the "Dom Mintoff Gardens".

In May 2018, another statue of Mintoff was unveiled in Castille Square in Valletta directly opposite the office of the Prime Minister.