Advertisement - You can get this game from STEAM
For other uses, see Dolmen (disambiguation).
Type of single-chamber megalithic tomb 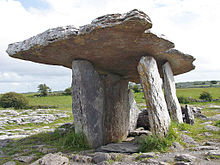 A dolmen (/ˈdɒlmɛn/) is a type of single-chamber megalithic tomb, usually consisting of two or more vertical megaliths supporting a large flat horizontal capstone or "table". Most date from the early Neolithic (4000–3000 BC) and were sometimes covered with earth or smaller stones to form a tumulus. Small pad-stones may be wedged between the cap and supporting stones to achieve a level appearance.[1] In many instances, the covering has weathered away, leaving only the stone "skeleton" of the mound intact.

It remains unclear when, why and by whom the earliest dolmens were made. The oldest known are found in Western Europe, dating from c 7,000 years ago. Archaeologists still do not know who erected these dolmens, which makes it difficult to know why they did it. They are generally all regarded as tombs or burial chambers, despite the absence of clear evidence for this. Human remains, sometimes accompanied by artefacts, have been found in or close to the dolmens which could be scientifically dated using radiocarbon dating. However, it has been impossible to prove that these remains date from the time when the stones were originally set in place.[2] 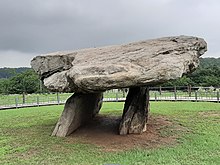 The word dolmen has an unclear history. The word entered archaeology when Théophile Corret de la Tour d'Auvergne used it to describe megalithic tombs in his Origines gauloises (1796) using the spelling dolmin (the current spelling was introduced about a decade later and had become standard in French by about 1885).[3][4] The Oxford English Dictionary does not mention "dolmin" in English and gives its first citation for "dolmen" from a book on Brittany in 1859, describing the word as "The French term, used by some English authors, for a cromlech ...". The name was supposedly derived from a Breton language term meaning "stone table" but doubt has been cast on this, and the OED describes its origin as "Modern French". A book on Cornish antiquities from 1754 said that the current term in the Cornish language for a cromlech was tolmen ("hole of stone") and the OED says that "There is reason to think that this was the term inexactly reproduced by Latour d'Auvergne [sic] as dolmen, and misapplied by him and succeeding French archaeologists to the cromlech".[5] Nonetheless it has now replaced cromlech as the usual English term in archaeology, when the more technical and descriptive alternatives are not used. The later Cornish term was quoit - an English language word for an object with a hole through the middle preserving the original Cornish language term of 'Tolmen' - the name of another dolmen-like monument is in fact Mên-an-Tol 'stone with hole' (SWF: Men An Toll.[6]

The etymology of the German: Hünenbett, Hünengrab and Dutch: hunebed - with Hüne/hune meaning "giant" - all evoke the image of giants buried (bett/bed/grab = bed/grave) there. Of other Celtic languages, Welsh: cromlech was borrowed into English and quoit is commonly used in English in Cornwall.