A dissident, broadly defined, is a person who actively challenges an established doctrine, policy, or institution. In a religious context, the word has been used since 18th century, and in the political sense since 1940, coinciding with the rise of totalitarian systems, especially the Soviet Union, Nazi Germany, and Saudi Arabia.[1]

The term dissident was used in the Eastern bloc, particularly in the Soviet Union, in the period following Joseph Stalin's death until the fall of communism. It was attached to citizens who criticized the practices or the authority of the Communist Party. The people who used to write and distribute non-censored, non-conformist samizdat literature were criticized in the official newspapers. Soon, many of those who were dissatisfied with the Soviet Bloc began to self-identify as dissidents.[2] This radically changed the meaning of the term: instead of being used in reference to an individual who opposes society, it came to refer to an individual whose non-conformism was perceived to be for the good of a society.[3][4][5] 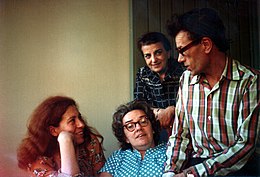 Soviet dissidents were people who disagreed with certain features in the embodiment of Soviet ideology and who were willing to speak out against them.[6] The term dissident was used in the Soviet Union in the period following Joseph Stalin's death until the fall of communism.[2] It was used to refer to small groups of marginalized intellectuals whose modest challenges to the Soviet regime met protection and encouragement from correspondents.[7] Following the etymology of the term, a dissident is considered to "sit apart" from the regime.[8] As dissenters began self-identifying as dissidents, the term came to refer to an individual whose non-conformism was perceived to be for the good of a society.[3][4][5]

Political opposition in the USSR was barely visible and, with rare exceptions, of little consequence.[9] Instead, an important element of dissident activity in the Soviet Union was informing society (both inside the Soviet Union and in foreign countries) about violation of laws and human rights. Over time, the dissident movement created vivid awareness of Soviet Communist abuses.[10]

Soviet dissidents who criticized the state faced possible legal sanctions under the Soviet Criminal Code[11] and faced the choice of exile, the mental hospital, or the labor camp.[12] Anti-Soviet political behavior, in particular, being outspoken in opposition to the authorities, demonstrating for reform, writing books were defined in some persons as being simultaneously a criminal act (e.g., violation of Articles 70 or 190-1), a symptom (e.g., "delusion of reformism"), and a diagnosis (e.g., "sluggish schizophrenia").[13]

The term dissident has become the primary term to describe Irish republicans who politically continue to oppose Good Friday Agreement of 1998 and reject the outcome of the referendums on it. These political parties also have paramilitary wings which espouse violent methods to achieve a United Ireland.

Dissidents and activists were among the earliest adopters of encrypted communications technology such as Tor and the dark web, turning to the technology as ways to resist authoritarian regimes, avoid censorship and control and protect privacy.[15][16][17]

Tor was widely used by protestors on Mubarak regime in Egypt in 2011. Tor allowed dissidents to communicate anonymously and securely, while sharing sensitive information. Also, Syrian rebels widely used Tor in order to share with the world all of the horrors that they witnessed in their country.[18] Moreover, government dissidents in Lebanon, Mauritania, as well as Arab Spring nations widely used Tor in order to stay safe while exchanging their ideas and agendas.[19]

Dissidents from the Middle East

Jamal Khashoggi was a Saudi-American dissident and journalist. He was murdered inside a Turkish embassy by Saudi Arabian authorities.[20]

Various other Human rights activists from Saudi Arabia have been either silenced or punished. This also happens if the individual is outside the country. Deportation is used if they are not Saudis.