Diriyah[1] (Arabic: الدرعية‎), formerly romanized as Dereyeh[2] and Dariyya,[3] is a town in Saudi Arabia located on the north-western outskirts of the Saudi capital, Riyadh. Diriyah was the original home of the Saudi royal family, and served as the capital of the Emirate of Diriyah under the first Saudi dynasty from 1744 to 1818. Today, the town is the seat of the Diriyah Governorate, which also includes the villages of Uyayna, Jubayla, and Al-Ammariyyah, among others, and is part of Ar Riyad Province.

The Turaif district, the first capital of Saudis,[4][5] in Diriyah was declared a UNESCO World Heritage Site in 2010. For the 2018–19 Formula E Season, it was announced that Diriyah would host the season opening race.

The ruins of the old city of Diriyah lay on either side of the narrow valley known as Wadi Hanifa, which continues southwards through Riyadh and beyond. Consisting almost entirely of mud-brick structures, the ruins are divided into three districts, Ghussaibah, Al-Mulaybeed, and Turaif, set on top of hills overlooking the valley. Of the three, Turaif is the highest, and its bottom is easily accessible to tourists by foot. Part of the city wall, running along the edges of the wadi and also made of mud-bricks, are still extant along with some short observation towers.

The modern city is built at a lower altitude at the foot of the hill upon which Turaif is located. To the north of the town, inside the valley, are a number of gardens, palm groves, and small farms and estates. A dam known as Al-Ilb lies further north.

A platoon of thirty Muslims under the leadership of Muhammad bin Maslamah was despatched on a military mission. It headed for the habitation of the Qurata, a sept of the Bakr clan of the Banu Kilab. The Muslims attacked that sept and dispersed them in all directions. Plenty of spoils (war booty) were captured and the Muslims returned with the chief of the tribe of Banu Hanifa, called Thumamah Bin Uthal Al-Hanafi.[8]

The event is also mentioned by the Muslim scholar Ibn Sa'd in his book about Muhammad's military campaigns.[9] he wrote about the expedition:

Then occurred the sariyyah of Muhammad Ibn Maslamah against al-Qurata. He set out on 10 Muharram in the beginning of the fifty ninth month from the hijrah of the Apostle of Allah, may Allah bless him. He (Prophet) despatched him against al-Qurata, an under-tribe of Banu Bakr a branch of the Kilab.

They used to halt at al-Bakarat, a place in the vicinity of Dariyyah. Dariyyah issituas- ed at (a distance of) seven stages from al-Madinah. He had ordered him to surround it from all sides. So he marched in the night and...
[Ibn Sa'd, Kitab al-tabaqat al-kabir, p. 96]

Although the location is sometimes identified with an ancient settlement mentioned by Yaqut and Al-Hamadani known as "Ghabra",[10] the history of Diriyah proper dates back to the 15th century. According to the chroniclers of Nejd, the city was founded in 1446–47 by Mani' Al-Muraydi (مانع المريدي), an ancestor of the Saudi royal family. Mani and his clan had come from the area of Al-Qatif in eastern Arabia, upon the invitation of Ibn Dir' (ابن درع), who was then the ruler of a group of settlements that now make up Riyadh. Ibn Dir' is said to have been a relative of Mani' Al-Mraydi, and Mani's clan is believed to have left the area of Wadi Hanifa at some unknown date and were merely returning to their country of origin.[3][11]

Initially, Mani' and his clan, known as the Mrudah, settled in Ghusaybah (الغصيبة) and Al-Mulaybeed (المليبيد). The entire settlement was named Al-Dir'iyah, after Mani's benefactor Ibn Dir'. Later on, the district of Turaif (طُريف) was settled.[3] Many families from other towns or from the bedouin tribes of the nearby desert eventually settled in the area and by the 18th century Diriyah had become a well-known town in Nejd.

At that time, Muhammad ibn Saud emerged from a struggle within the ruling family of Al-Diriyah, the Al Miqrin (مقرن, sons of Miqrin, a descendant of Mani'), and became the emir, or ruler, of Al-Diriyah. In 1744, Ibn Saud took in a religious scholar named Muhammad ibn Abd al-Wahhab, who hailed from the town of Al-Uyaynah, lying on the same wadi some 30 miles upstream. Ibn Saud agreed to implement Muhammadi religious views, and what later became known as the First Saudi State, with its capital at Diriyah, was born. Within the next several decades, Ibn Saud and his immediate descendants managed to subjugate all of Nejd, as well as the eastern and western regions of Arabia, and sent raids into Iraq. Diriyah quickly swelled in size and increased in wealth, becoming the largest town in Nejd and a major city in Arabia by the standards of the time. However, the Saudis' conquest of the holy cities of Mecca and Medina drew the ire of the Ottoman Empire, the major Islamic power at the time, led to the Ottoman-Saudi War of 1811–1818 and an invasion of Arabia by Ottoman and Egyptian forces brought the Saudi state to an end in 1818, with Diriyah capitulating after a nearly-year-long siege. The leader of the invading force, Ibrahim Pasha, ordered the destruction of Diriyah. However, when a member of the local nobility tried to revive the Wahhabi state in Diriyah, Ibrahim ordered his troops to destroy the town even further and set whatever was left of it on fire. When the Saudis revived their fortunes in 1824 and again in 1902, they made their capital further south in Riyadh, which has remained their capital ever since.[12]

"The Ottoman Empire viewed the Arab challenge with alarm- especially after the loss of Makkah and Al-Madinah, and the deletion of the Ottoman emperor's name from Friday prayers- and an Egyptian army under Ibrahim Pasha was sent to recover lost territory. In 1818 the army entered Dar'iya and after a six month siege penetrated the defenses on the Turaif, totally destroyed the houses and cut down every tree in the palm groves. The Egyptians were estimated to have lost 10,000 men in the siege, and the Saudi forces 1,800."[13]

The town's original inhabitants left Diriyah after 1818, with the bulk of them moving to Riyadh. In The Kingdom (first published in 1981), British author Robert Lacey observed that the Al Saud had "left the shell of their old capital behind them, an enduring reminder of the frontiers of the possible" and compared the old Diriyah to "a sand-blown Pompeii".[12] However, the area was resettled in the late 20th century, mostly by former nomads (bedouin), and a new city was founded by the Saudi government in the late 1970s.[14] This new city of Diriyah grew in size and is now a small but modern town and the seat of its own governorate. The ruins remain a tourist attraction, and are subject to a slow restoration project on the part of the Saudi government. 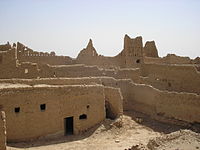 Saudi Arabia has formed the Diriyah Gate Development Authority (DGDA) to oversee preservation and development of the historic site. In 2018, Jerry Inzerillo, previously the CEO of Forbes Travel Guide, to lead the new authority; Inzerillo has said that Diriyah will soon be known as "the Beverly Hills of Riyadh."[15]

Among the rebuilt structures are the Bath and guest house, the Qasr Nasr, the Saad bin Saud Palace (finished by the early 90s), the Burj Faysal (a wall tower renovated in the 80s), major sections of the wall surrounding Turaif and sections of the outer walls and some watch towers surrounding the wadi. Outside of the Turaif district, on the opposite side of the wadi Hanifa, the region of the mosque of Sheik Mohammad bin Abdulwahab has been completely remodelled, leaving only some of the more recent original structures standing to the north of the complexe build on the site of the historic mosque.

The "Turief District Development Plan" aims to turn the district into a major national, cultural and touristic center.[16] Before turning the complete site into a modern open-air museum documentation and necessary investigations, including excavations especially in places that may need to be remodelled, are planned in three major phases. These will include sites such as:[16]

Once finished, there will be a new visitors center as well as a documentation center. Four new museums are planned for the district.[16]

Additionally a Turief traditional market will add to the open-air museum experience.

Despite Muhammadi destruction of many Islamic, non-Islamic, and historical sites associated with the first Muslims; the Prophet's family and companions) and the strong discouraging of visiting such sites (including mosques), the Saudi government renovated the domain of Muhammad ibn Abd al-Wahhab turning it into a major tourist attraction.[17][18]

A historic fort in Diriyah

The old city's historic structures include:[14]

The layout of the city itself can be easily studied in the National Museum of Saudi Arabia with the help of a large scale detailed model of the city on display there.