Direct current (DC) is the one directional or unidirectional flow electric charge. An electrochemical cell is a prime example of DC power. Direct current may flow through a conductor such as a wire, but can also flow through semiconductors, insulators, or even through a vacuum as in electron or ion beams. The electric current flows in a constant direction, distinguishing it from alternating current (AC). A term formerly used for this type of current was galvanic current.[1]

The abbreviations AC and DC are often used to mean simply alternating and direct, as when they modify current or voltage.[2][3]

Direct current has many uses, from the charging of batteries to large power supplies for electronic systems, motors, and more. Very large quantities of electrical energy provided via direct-current are used in smelting of aluminum and other electrochemical processes. It is also used for some railways, especially in urban areas. High-voltage direct current is used to transmit large amounts of power from remote generation sites or to interconnect alternating current power grids.

Direct current was produced in 1800 by Italian physicist Alessandro Volta's battery, his Voltaic pile.[5] The nature of how current flowed was not yet understood. French physicist André-Marie Ampère conjectured that current travelled in one direction from positive to negative.[6] When French instrument maker Hippolyte Pixii built the first dynamo electric generator in 1832, he found that as the magnet used passed the loops of wire each half turn, it caused the flow of electricity to reverse, generating an alternating current.[7] At Ampère's suggestion, Pixii later added a commutator, a type of "switch" where contacts on the shaft work with "brush" contacts to produce direct current. 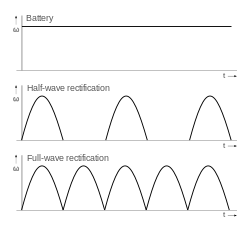 Although DC stands for "direct current", DC often refers to "constant polarity". Under this definition, DC voltages can vary in time, as seen in the raw output of a rectifier or the fluctuating voice signal on a telephone line.

Some forms of DC (such as that produced by a voltage regulator) have almost no variations in voltage, but may still have variations in output power and current.

If a capacitor or inductor is added to a DC circuit, the resulting circuit is not, strictly speaking, a DC circuit. However, most such circuits have a DC solution. This solution gives the circuit voltages and currents when the circuit is in DC steady state. Such a circuit is represented by a system of differential equations. The solution to these equations usually contain a time varying or transient part as well as constant or steady state part. It is this steady state part that is the DC solution. There are some circuits that do not have a DC solution. Two simple examples are a constant current source connected to a capacitor and a constant voltage source connected to an inductor.

In electronics, it is common to refer to a circuit that is powered by a DC voltage source such as a battery or the output of a DC power supply as a DC circuit even though what is meant is that the circuit is DC powered.

This symbol which can be represented with Unicode character U+2393 (⎓) is found on many electronic devices that either require or produce direct current.

Domestic DC installations usually have different types of sockets, connectors, switches, and fixtures from those suitable for alternating current. This is mostly due to the lower voltages used, resulting in higher currents to produce the same amount of power.

It is usually important with a DC appliance to observe polarity, unless the device has a diode bridge to correct for this.

Most automotive applications use DC. An automotive battery provides power for engine starting, lighting, and ignition system. The alternator is an AC device which uses a rectifier to produce DC for battery charging. Most highway passenger vehicles use nominally 12 V systems. Many heavy trucks, farm equipment, or earth moving equipment with Diesel engines use 24 volt systems. In some older vehicles, 6 V was used, such as in the original classic Volkswagen Beetle. At one point a 42 V electrical system was considered for automobiles, but this found little use. To save weight and wire, often the metal frame of the vehicle is connected to one pole of the battery and used as the return conductor in a circuit. Often the negative pole is the chassis "ground" connection, but positive ground may be used in some wheeled or marine vehicles.

Telephone exchange communication equipment uses standard −48 V DC power supply. The negative polarity is achieved by grounding the positive terminal of power supply system and the battery bank. This is done to prevent electrolysis depositions. Telephone installations have a battery system to ensure power is maintained for subscriber lines during power interruptions.

Other devices may be powered from the telecommunications DC system using a DC-DC converter to provide any convenient voltage.

Applications using fuel cells (mixing hydrogen and oxygen together with a catalyst to produce electricity and water as byproducts) also produce only DC.