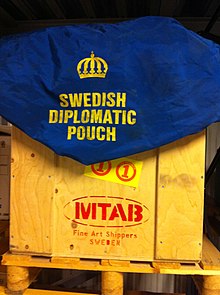 A diplomatic bag, also known as a diplomatic pouch, is a container with certain legal protections used for carrying official correspondence or other items between a diplomatic mission and its home government or other diplomatic, consular, or otherwise official entity.[1] The physical concept of a "diplomatic bag" is flexible and therefore can take many forms (e.g., a cardboard box, briefcase, duffel bag, large suitcase, crate or even a shipping container).[1]

Additionally, a diplomatic bag usually has some form of lock and/or tamper-evident seal attached to it in order to deter or detect interference by unauthorized third parties. The most important point is that as long as it is externally marked to show its status, the "bag" has diplomatic immunity from search or seizure,[2] as codified in article 27 of the 1961 Vienna Convention on Diplomatic Relations.[3] It may only contain articles intended for official use.[3] It is often escorted by a diplomatic courier, who is similarly immune from arrest and detention.[2][3] 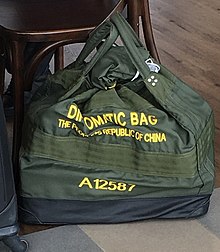